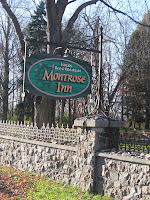 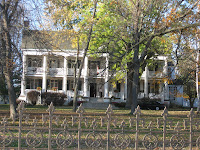 When I was growing up, homes and farms were commonly referred to as "the old [insert original family name here] place. This happened in spite of how many subsequent owners there may had been and how extended their tenure.
I discovered that this tendency was still alive when I interviewed a local heritage expert regarding this wonderful property which captured my eye and my heart when first I saw it. She referred to the place as the Old Graham House.
The home is a classic Colonial Revival style. Shannon Kyles, in the outstanding on-line resource OntarioArchitecture.com, provides a tongue-in-cheek checklist for identifying these homes. One of the qualifiers is: "if the house looks like it has just been placed there temporarily and really belongs in Mississippi, it is Colonial Revival." Check. She goes on to point out that many homes built in this style make spectacular inns; that is true of this mansion which is run as a very successful inn and tea room. I have seen some exquisite wedding parties being photographed on this lawn.
So, whose "old place" was it? Who built it and when? I have learned that this home was built about 1918 as a summer home by the wealthy Belleville entrepreneur, philanthropist and three-time mayor R.J.Graham as a present for his wife Grace Roblin. (The family home in the city still stands, and is an impressive eclectic Second Empire which I will write about one day, the Potts-Graham-Bone house, 1878). The country home was called "Montrose" after the Duke of Montrose in Scotland who was a distant relative. The house remained in the family trust until about ten years ago.
So there the history ends, until friend Brenda and I manage to go there for tea.
Posted by Ancestral Roofs at 1:54 PM