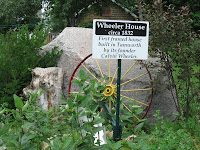 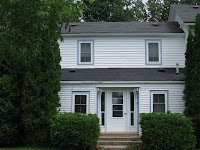 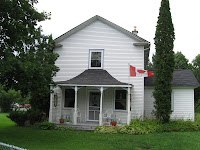 Not so long ago I travelled with a neighbour to her childhood haunts in Lennox and Addington county. She showed me places with personal significance for her in Napanee and Tamworth and rural spots between. It was a lovely day, and Elaine graciously indulged my need to snap photos of houses everywhere we went.
I was taking a few shots of this house. It is known as "the old Wheeler house." Someone has taken the time to create a home-made historic plaque, commemorating the house as the first frame house built in Tamworth, around 1832, by the village's founder, Calvin Wheeler. It has some Greek Revival roots in its gable end orientation to the street. I also noted the Regency inspired vernacular version of an awning roof. The plain white house was sided in wood, rather than the ubiquitous vinyl siding, which preserved the eaves returns and plain window surrounds. A woman appeared at the door, and asked if we would like to come in. I ran back to the car to collect my friend and prepare her for a treat. A few moments earlier Elaine had explained wistfully that this house was a place where she had spent many happy hours as a child.
We had a great visit. The woman was very heritage minded and was restoring the house on a budget, delighting in small discoveries (she was making a shadow box display from a number of door latches and other hardware). She and Elaine prowled through the house, upstairs and down. Elaine got to share many childhood memories, and I snapped away happily.
As Steven Leacock said, "History is everywhere". We all have some. Let's remember to celebrate and share it.
Posted by Ancestral Roofs at 9:42 AM