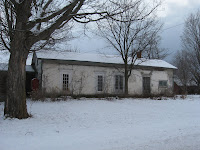 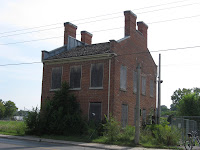 Another article in ACO's Acorn-on-line has me thinking. We so often use their term 'demolition by neglect'' to describe a situation where a building is left to deteriorate to a point where only the staunchest preservationist is left standing to defend it against the developers. This article coins a new term - 'developer's lightning' (hastily rescued from the tactless use of a now totally politically incorrect term by a local politician) - in connection with a fire, later found to be arson, which destroyed an important old hotel standing in the way of the Toronto developers.
The little house with the fine chimneys, above left, is the Billa Flint house (1835) in Belleville, built for this important local businessman and politician, who became a senator in 1867. Good pedigree this house has. Just recently the house was targeted by vandals who found the long-abandoned building just too tempting. Shame the owner doesn't find his stated plans for the place just as tempting. The clear and present danger for uninhabited heritage buildings is always further decay resulting in demolition. So often fire or other irreparable damage seems to have played into the hands of waiting developers (and the suspicious among us wonder aloud about collusion).
The house at top right is less famous - haven't been able to find anything about it so far. It sits on rural property north-east of Trenton. It's a lovely place, low regency profile with a line of tall windows and French doors with lovely cornices. Frame, stucco, gable roof. Lovely setting among trees on a country road. This house, unlike the Flint house, probably doesn't have anyone to speak up for it. Not famous. But this house would have a story. I hope it's been a happy one - family, success, tradition, love. Like we feel when a human life draws to its close: I hope life's been good to it. I hope all that can be done has been done. I hope this life will be remembered.
I hope to visit this little grey house a few more times before it goes.
Posted by Ancestral Roofs at 11:30 AM