Go on, impress me 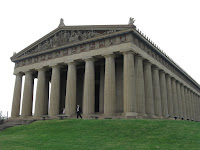 Now where in the world are we?
Well, Nashville of course!
Who wouldn't associate this exact replica of the Parthenon with Music City?
But association is exactly what this is about.
This replica of the Parthenon was built in Nashville for the 1895 world's fair. Nashville had high aspirations - it wanted to lose its frontier wild west image and become an Athens of the west, a centre of culture and commerce. Like all of the other structures produced to wow the visitors, this building was meant to be temporary and to be demolished later, but there great resistance which resulted in its being rebuilt as permanent structure in 1920. And so it stands in a lovely park - on a hill - on the Nashville bus tour route.
But this Parthenon wasn't the real thing. Many government buildings of the nineteenth century in the United States and Canada adopted the Classical Revival (or Greek Revival) style, "applying Greek plans and proportions to civic buildings" (Shannon Kyles). The reasoning is the image and the association. In the nineteenth century, as new nations were defining themselves, the Greek culture was being carefully studied. Archeological study produced studies and plan books based on the sublime geometry of the Classical orders, and architecture was never the same.
The builders of the fledgling American republic harnessed their architectural wagon to the Greek revival star - with its associations fitting their ambitions. The style evokes the nobility and enlightenment of the Greek culture and the democratic ideals of the Greek republic. Its use in civic buildings communicated those lofty ideals - and order, authority and stability. Interestingly, New York state, an area of expansion at that time, also adopted many Greek place names (and Greek Revival style in civic and domestic building) for the same reasons. That's why we shop in Syracuse and tour Greek Revival cobblestone houses in towns like Greece and Cato, N.Y.
Interestingly, this replica of the Parthenon is not accurate. It purports to be the only full-size replica in existence, and well it may be. But today the actual Parthenon at the Acropolis in Rome is quite plain and a bit worn (well it was built by 432 BC). And we all remember Lord Elgin, British ambassador to the Ottoman Empire, who 'rescued' all the sculpture from the frieze and pediments to their new home in the British Museum in the nineteenth century. Such was the absolute chauvinistic audacity of the British Empire at its peak! It must be terrible to see that amazing work stripped of its context, removed from this hilltop in the bright Greek sun that has bathed its ancient culture for so long, and displayed like natural history museum butterflies pinned to velvet.
Ah, well. Must get on with my reading. The Architectural Conservancy newsletter has lots of new stories about demolitions of Ontario historic buildings. Hope they're saving the marble mantels.
Posted by Ancestral Roofs at 12:30 PM