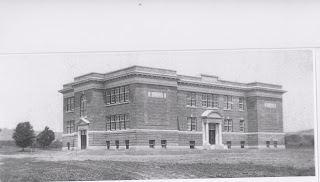 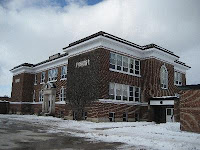 It's a damn shame, but it looks like the great old 1915 school in Brighton will be demolished soon. It's great to see the kids and teachers getting the shiny new school which is being built on the large property, but seems a shame that the fine old school has to be sacrificed in the bargain. It's frustrating that the combined needs for community space and heritage conservation cannot be met by some sort of compromise other than demolishing this once proud community achievement, and consigning fine workmanship, community history, and a lot of good building material to landfill.

We first learned about this struggle at an ACO meeting in Warkworth last spring, where we went to hear heritage architecture writer Robert Mikel speak about the grand summer homes of Cobourg. We met a lot of great folks, and heard first-hand of the frustration and heartbreak of this campaign. Nanci Anderson was kind
enough to send me a copy of  the archival photo at the top of this post. 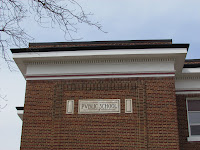 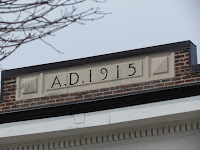 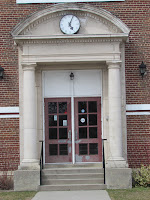 Here's the most recent report on the struggle, from the Architectural Conservancy of Ontario on-line newsletter December 2011 edition, received today.
Last Chance for Brighton School
Gordon Tobey writes from Brighton:
Following an almost five-year fight against the intractable Kawartha Pine Ridge District School Board, our small community of Brighton is facing the imminent demolition of its classical 1915 public school building early in the new year. After exhausting all avenues (and our meagre finances) we will appear as a delegation to Brighton Council's December 19th meeting, to make one final plea for them to act to protect the building before the wrecking ball swings.

Perhaps more important is the willful destruction of a publicly owned building with an estimated value of 3.4 million dollars and over 30,000 square feet of space that is badly needed by the community. To add insult to injury, the demolition will cost provincial taxpayers at least $280,000 and the rubble will end up in local landfill that we heard just this week has almost reached capacity.
We can't see why the Ministry of Education isn't mandated to influence the School Boards to conserve heritage buildings in its care when the Ontario government professes to support heritage conservation.

Posted by Ancestral Roofs at 10:22 AM