And I quote...Shannon Kyles, intrepid world traveller and architecture photographer, architecture professor and creator of the amazing websites www.ontarioarchitecture.com and www.lookuparchitecture.com, suggests there are three words to describe Romanesque Revival architecture..heavy, heavy and heavy. Have a look at the winter issue of Arabella magazine for Shannon's article on the style, and luxuriate in the rich photographs that accompany it. 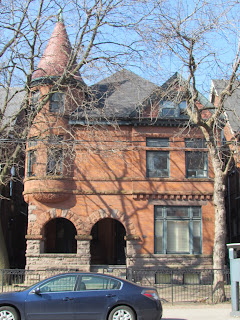 But if you don't have Arabella close to hand, you may have to settle for these shots I took as I ogled my way along a summery Toronto street recently.

The history of architecture is just full of revivals - like fashions in clothing - humans look back and redo old ideas, when we can't think of anything else to build, or when the ideas of a time long past conjure up something important we want to express. The Romanesque Revival style (c.1840-1900) draws on the Romanesque building styles which emerged out of the darkness of the Middle Ages in Europe. Its heavy character speaks to the need to fortify one's home and castle against the savage folk who occupied the wild land between the few bits of civilization, those small city states which survived or reemerged after the fall of the Roman Empire left Europe temporarily without a landlord. 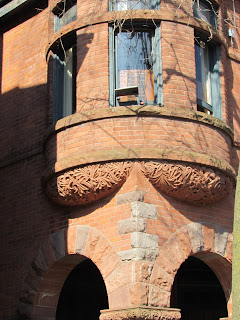 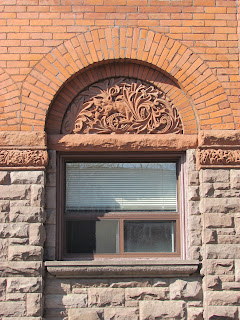 Recently I enjoyed four balmy days on Toronto, wandering streets bursting with new tulips, daffodils, forsythia and honeysuckle, capturing images of some of the amazing domestic architecture in the area north of Queen Street, in the neighbourhoods around the AGO. I was on the look-out for the style, as I'd heard Toronto has some of the best. On Beverley Street I found these fortress-like dwellings.

It's said that Romanesque Revival was a style popular with wealthy 19th century industrialists. The fortress mentality would fit. What a great way to say "I've got the power!" to folks dropping by for dinner. A house of substance for a man (exclusively male domain, c.19 business) of substance. 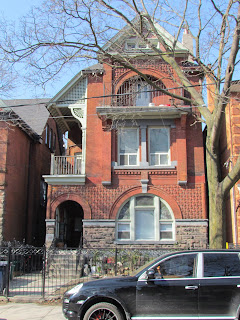 I expect this would be considered an eclectic Queen Anne with Romanesque Revival affectations. I love the 'woven' terracotta first storey above the requisite lumpy stone foundation.
Rounded arch - check. See first and third floor windows. Deep entrance porch with archway supported on piles.Carving - notice the row of billets under the second storey window sill - check out any Romanesque period doorway (Lincoln Cathedral's a good one) for the inspiration. 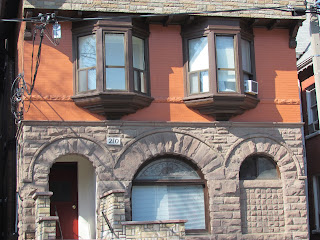 I only wish I'd had time to go further downtown to pay homage to those two amazing civic buildings in the Romanesque Revival style: old City Hall, and the imperious Queen's Park. I'm wondering about the significance of the seat of local government in massively  fortified structures -could it be they've always been mindful of the need for seeking safety from their electorate?
Posted by Ancestral Roofs at 11:45 AM