It used to be my town too 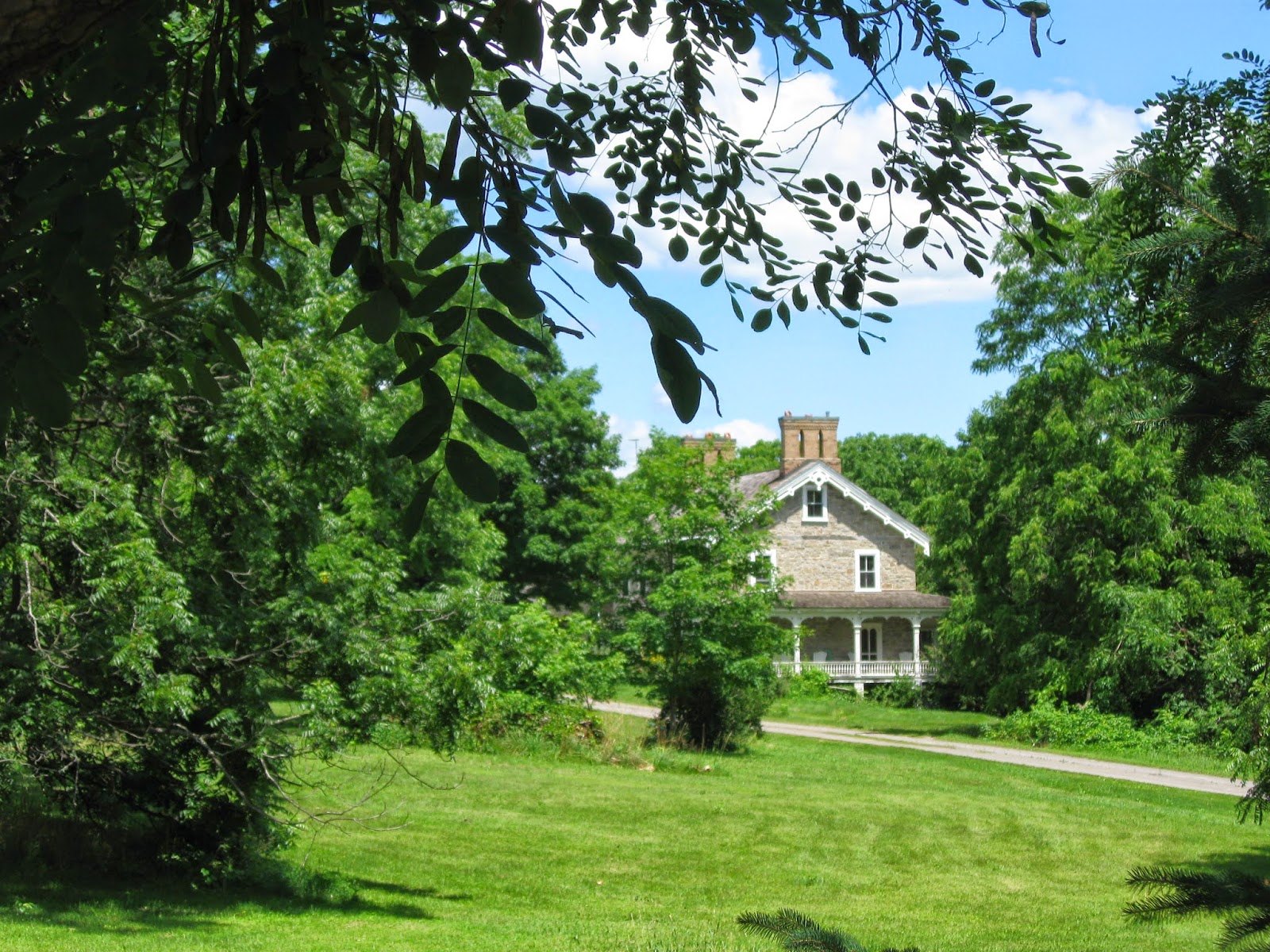 We walked the length of Merrickville last Friday - if enjoying every interesting house along the entirety of Mill/St.Lawrence Street is doing 'the length'.

We then returned via all the other streets, if that's not a geographical impossibility. The heat made it a challenge...but the hospitality at the delightful Dickens-themed Gad's Hill Place pub and restaurant had fortified us adequately.

Our constant companion Katherine Ashenburg made the point that few Ontario towns are named after their founders (or few remained so, if they started out that way). That famous modesty of ours?

Merrickville, however, is an exception. There were Merricks. Although as of 1996, when Going to Town was published, Ms. Ashenburg regrets that there are no Merricks no more.

She also records that  two impressive Merrick houses, father William's and son Aaron's, are at the extreme opposite ends of the street we trudged. Which may imply lots, or nothing at all. There is certainly a difference in their style, and vintage . 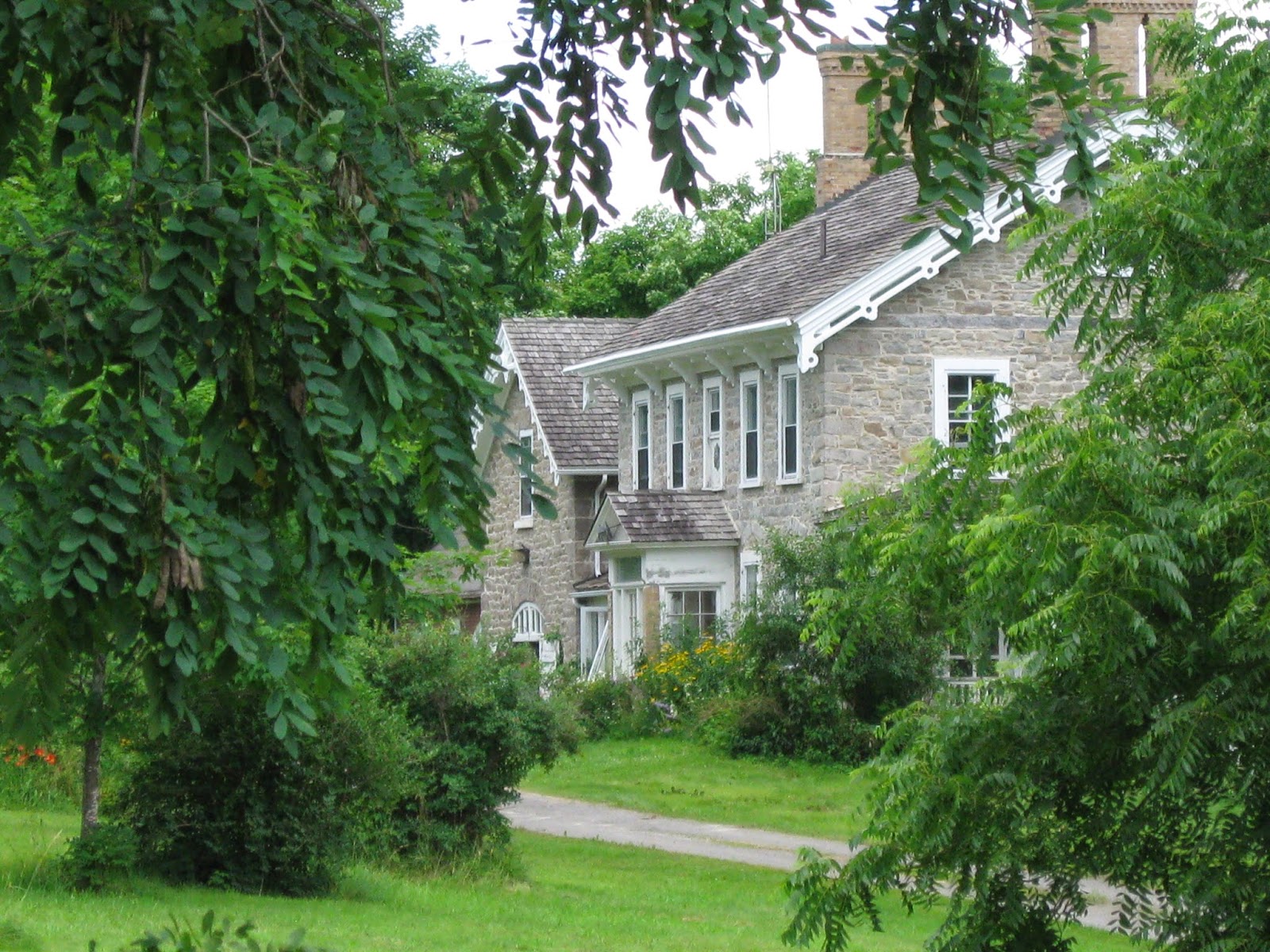 At the north end of town  facing the industrial complex and the river, its gable end wall to the road (and coyly distant from it) is the circa 1821 home of father William, said to be the third (as folks generally didn't start out grand). Although it's far distant from the road, and hard to see for all the exquisite trees, I detected the Georgian symmetry, multiple flue chimneys at each end, limestone.

A second owner, industrialist William Pearson, appeared in 1869; he added the bargeboard and likely the verandah and carriage house.

William Mirick (1760-1841), UEL from Massachussets, arrived in the early 1790's, and established a mill on a spot along the Rideau which featured a handy fourteen foot drop.

Today, there is an interesting complex of early industrial buildings some still operating, and others artistically remembered in the fine National Historic Site ruins and find educational displays (more on this later, as the place was really a treat) 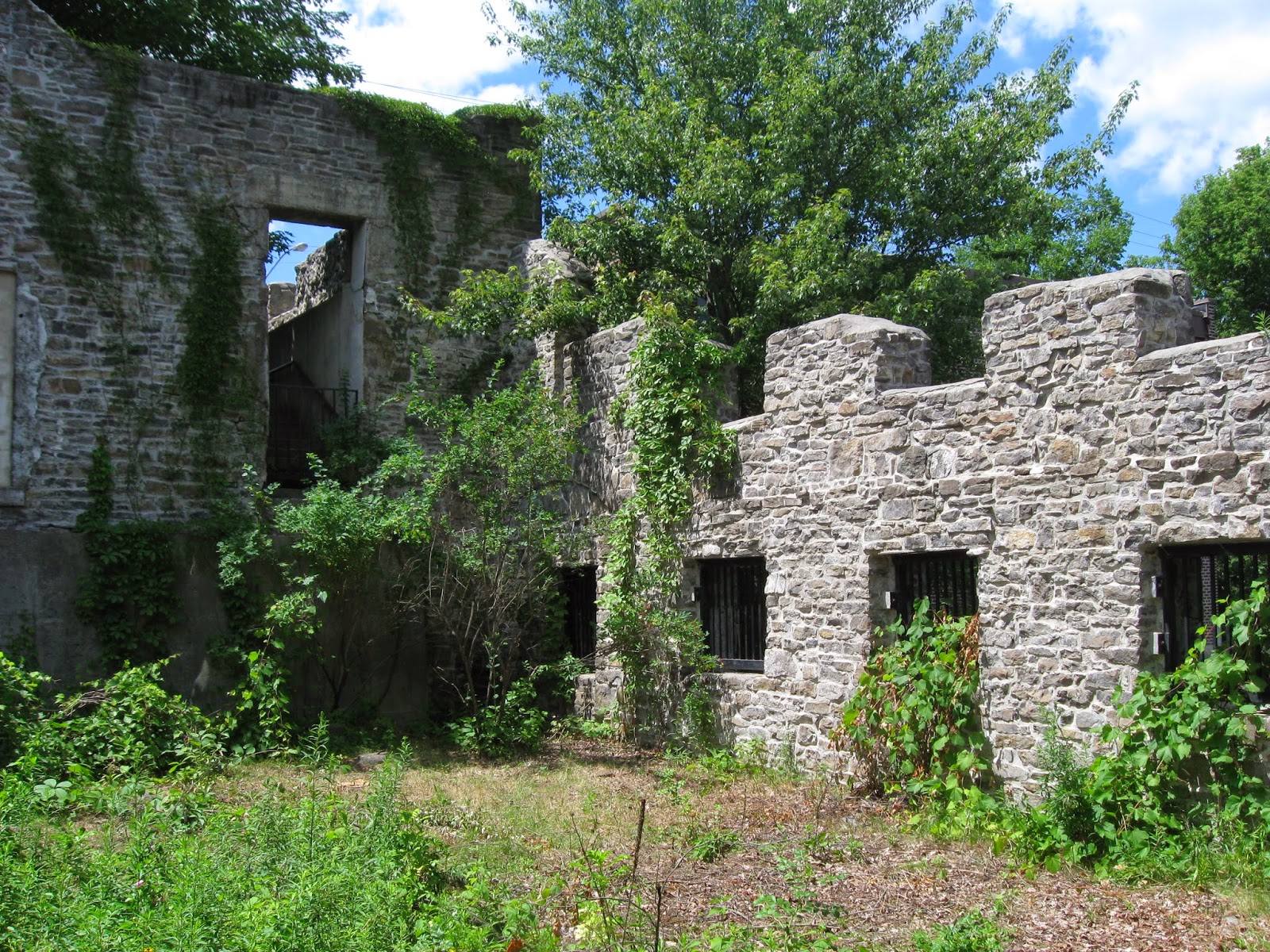 Sometime later,  the spelling of his name changed (one never knows if this was the owner's decision or the dodgy spelling of early registry office clerks). 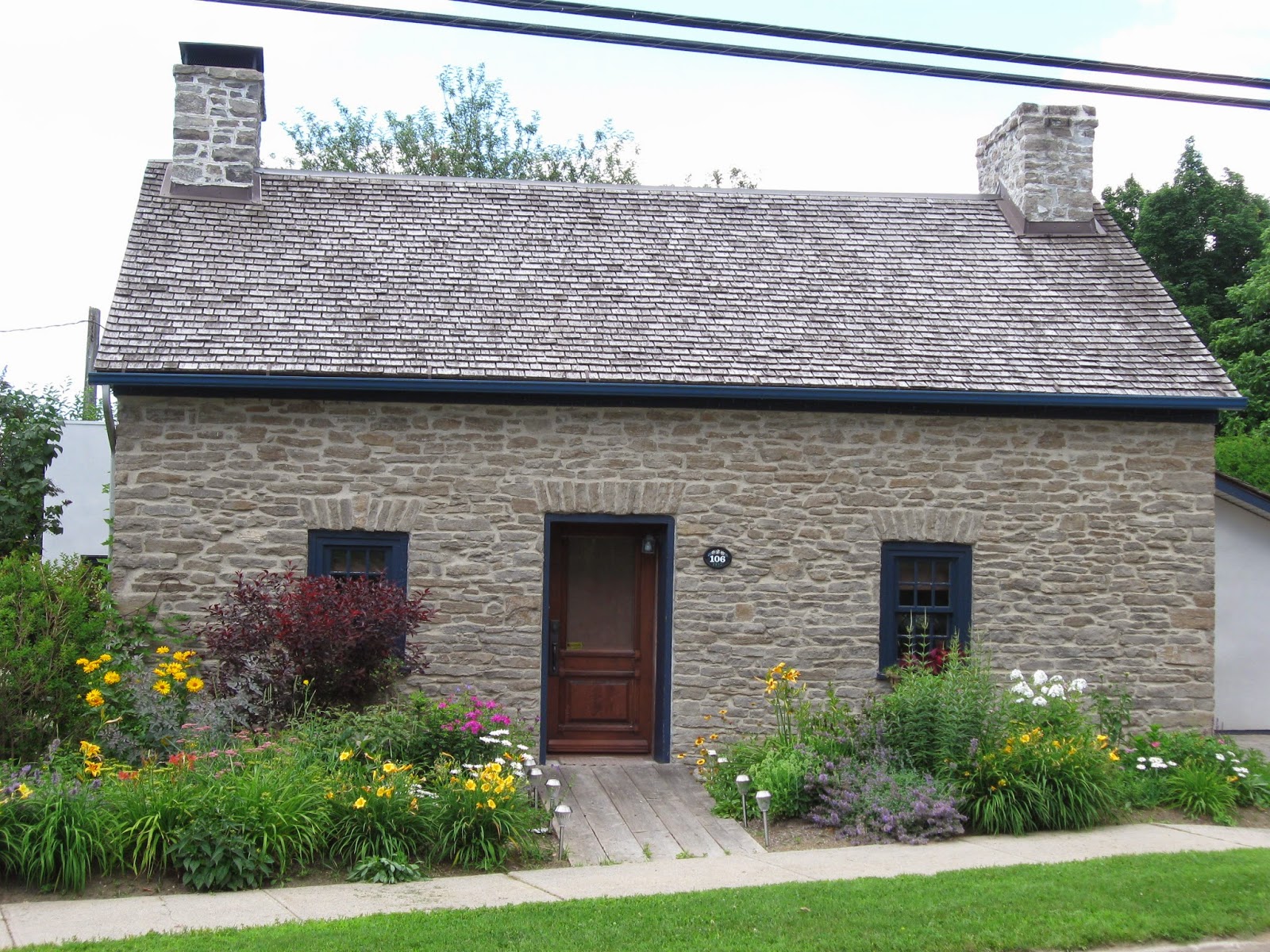 Ashenburg tells a great story about local tensions around  intoxicating liquors. The village led the temperance march with conviction as early as 1830. William's sons must have irritated the righteous - Aaron and Terence are said to have built and operated this cozy little stone house at 106 Mill Street as an inn and tavern around 1830.


Ashenburg comments on 'the secretive look that comes from few and small windows and recessed door." With the wild profusion of old fashioned flowers, it looks to me a most inviting place indeed.

The plaque outside the eye-catching house at 905 St. Lawrence Street recounts that it was built in 1844 for Aaron Merick, who was elected first Reeve of the village in 1860.He sold the house in 1899 to William Postlethwaite, who sold it in 1922 to Harry Falconer McLean, head of Dominion Construction, builder of Abitibi Canyon Dam and Ontario Northland Railway among other megaprojects. A dynamo with an eccentric flair, he created a zoo on the property. He is also credited with the side porches, classical portico and dormers.  'Hilltop' was sold upon his death in 1961. We met an elderly gentleman in our wanderings who had stories of the day he was anxious to tell. Perhaps we should have listened. 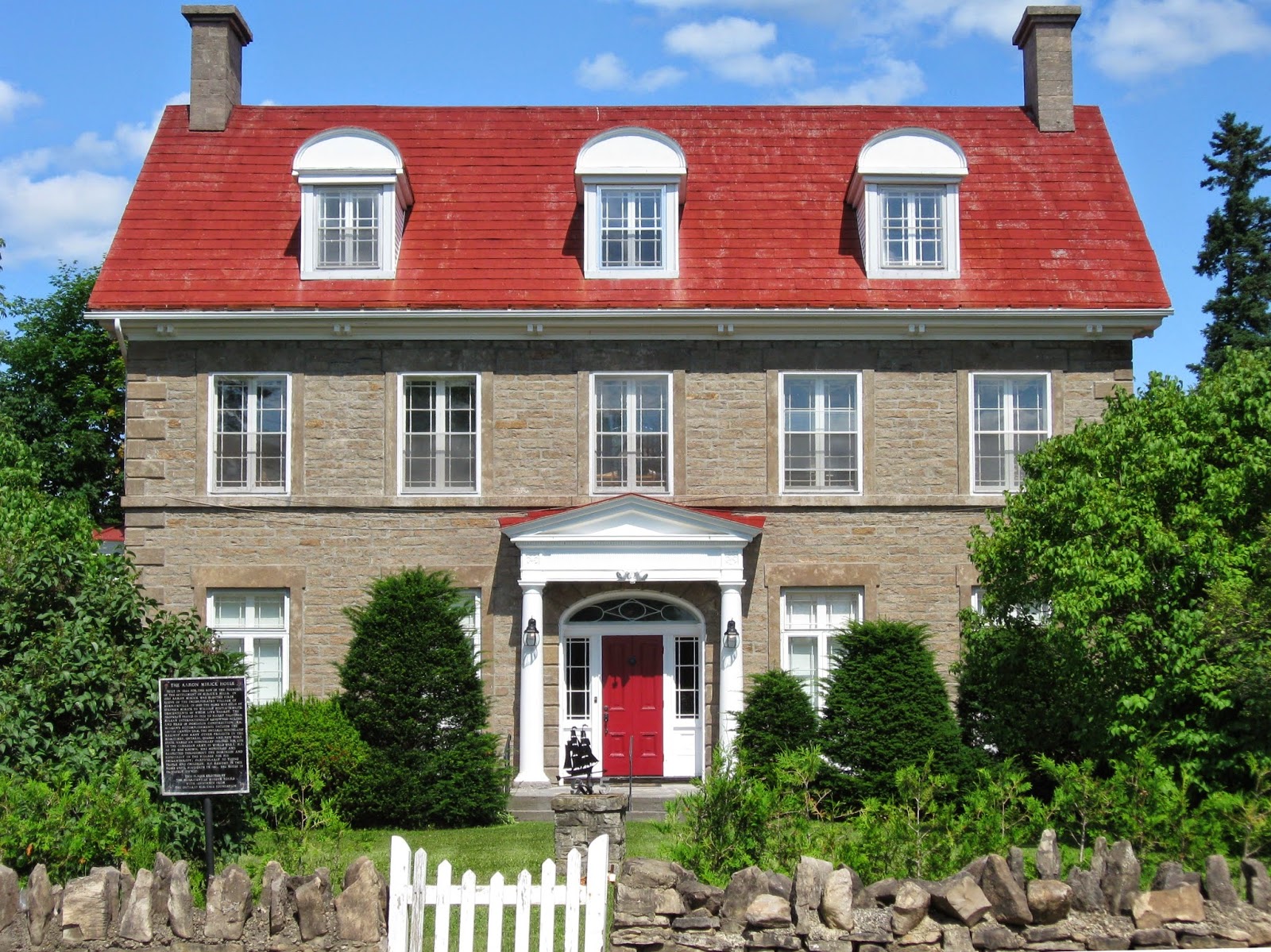 Of more interest to lovers of  old houses however is the 'presence' this house exudes. The four French doors speak to its Regency taste (Ashenburg reports that there was a full verandah until the 1920's - wouldn't that have been lovely in this almost-country spot? She then remarks on the classical influences: symmetry, sharply pitched roof and its tall two and a half stories. Although tough to see from a distance, the stonework (attributed to Samuel Langford,  Merrickville's legendary builder) is of the finest quality. 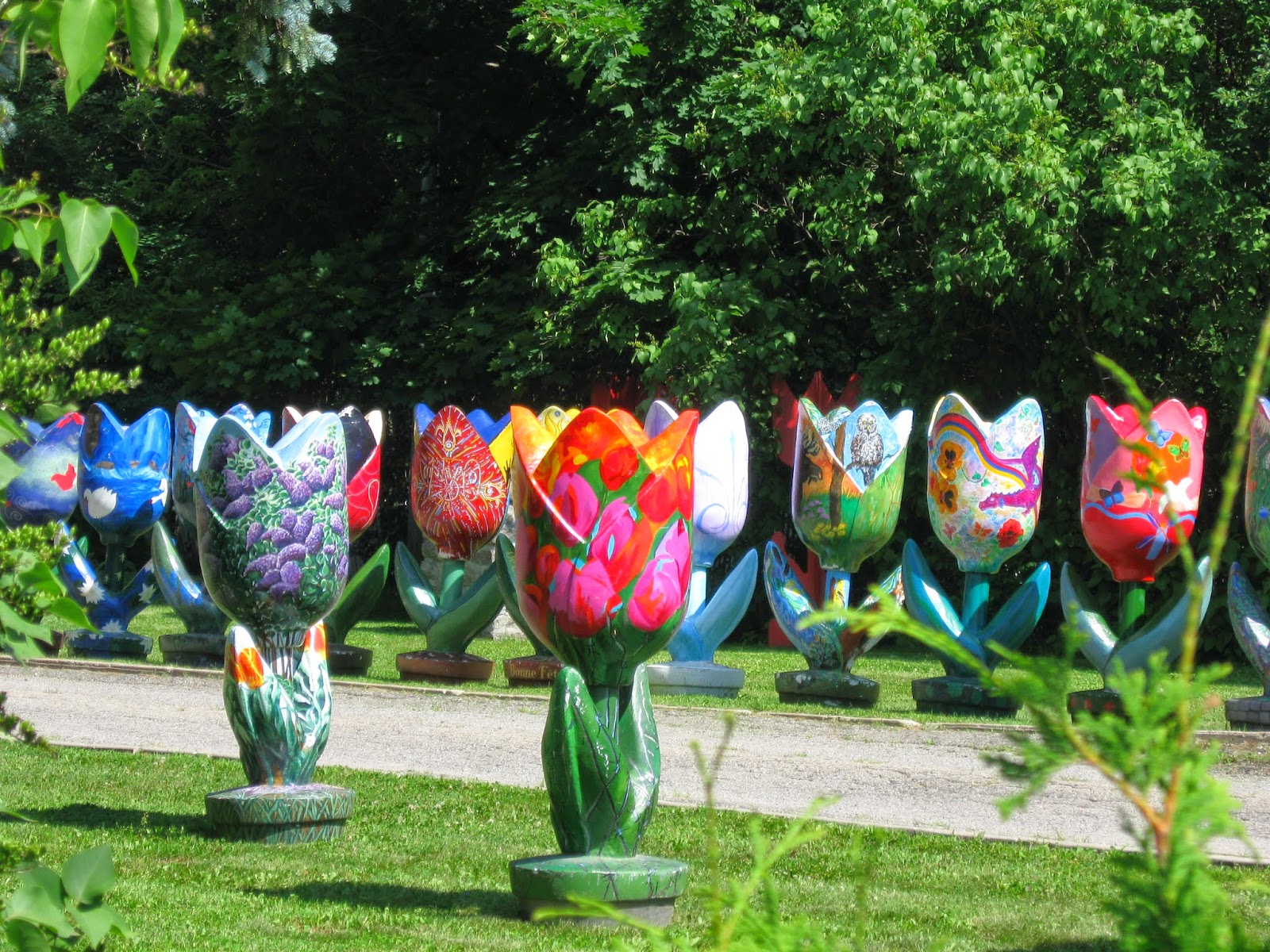 Once question remains. Who can explain the giant portrait tulips lining the drive?

Posted by Ancestral Roofs at 9:49 AM