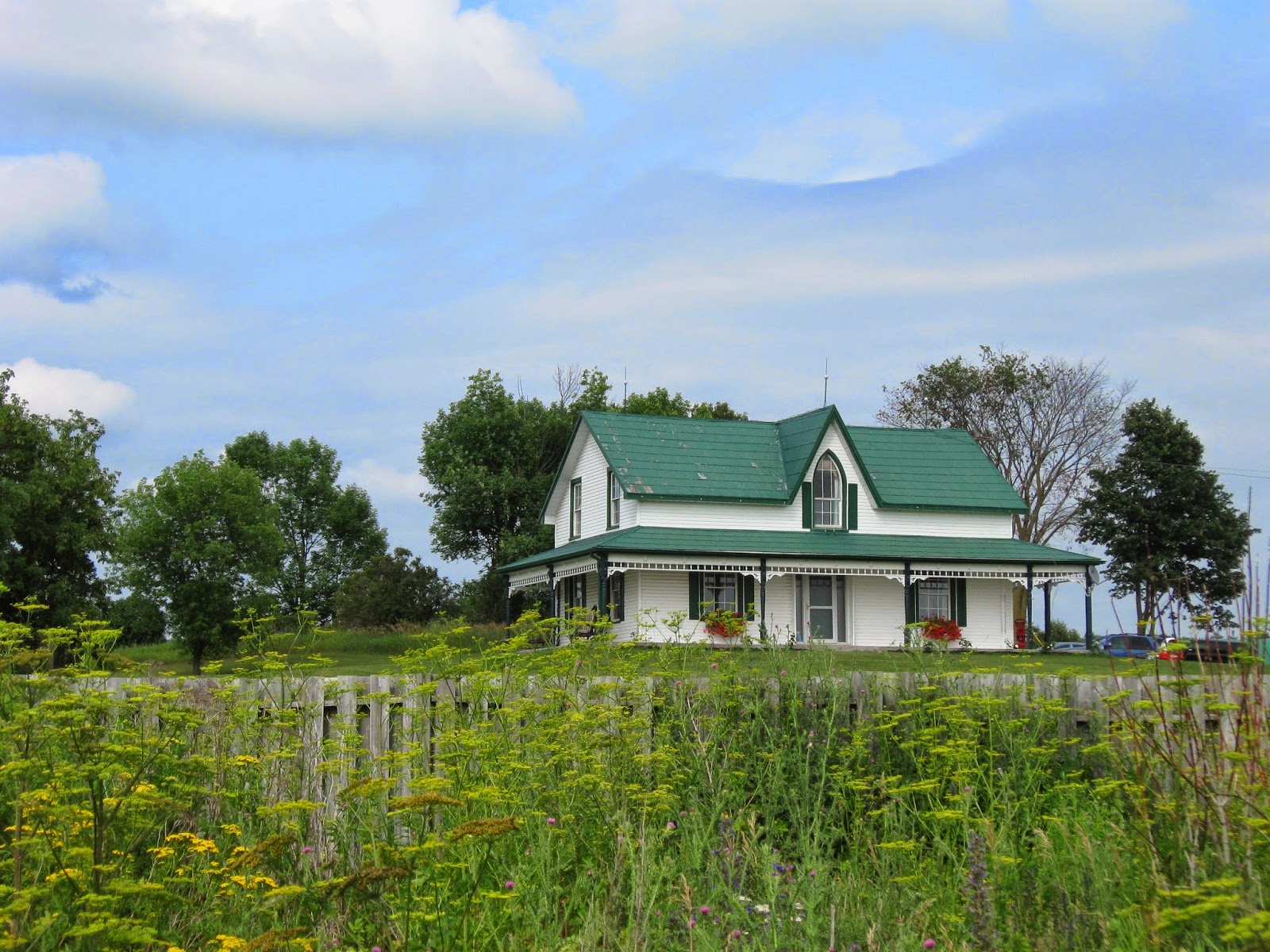 Recently, after a visit to Farmtown Park (about which I intend to enthuse in a post very soon) I asked my fellow traveller if he could stop safely on Sunday-drive busy County Road 14, to capture these three historic houses, which I have long admired. 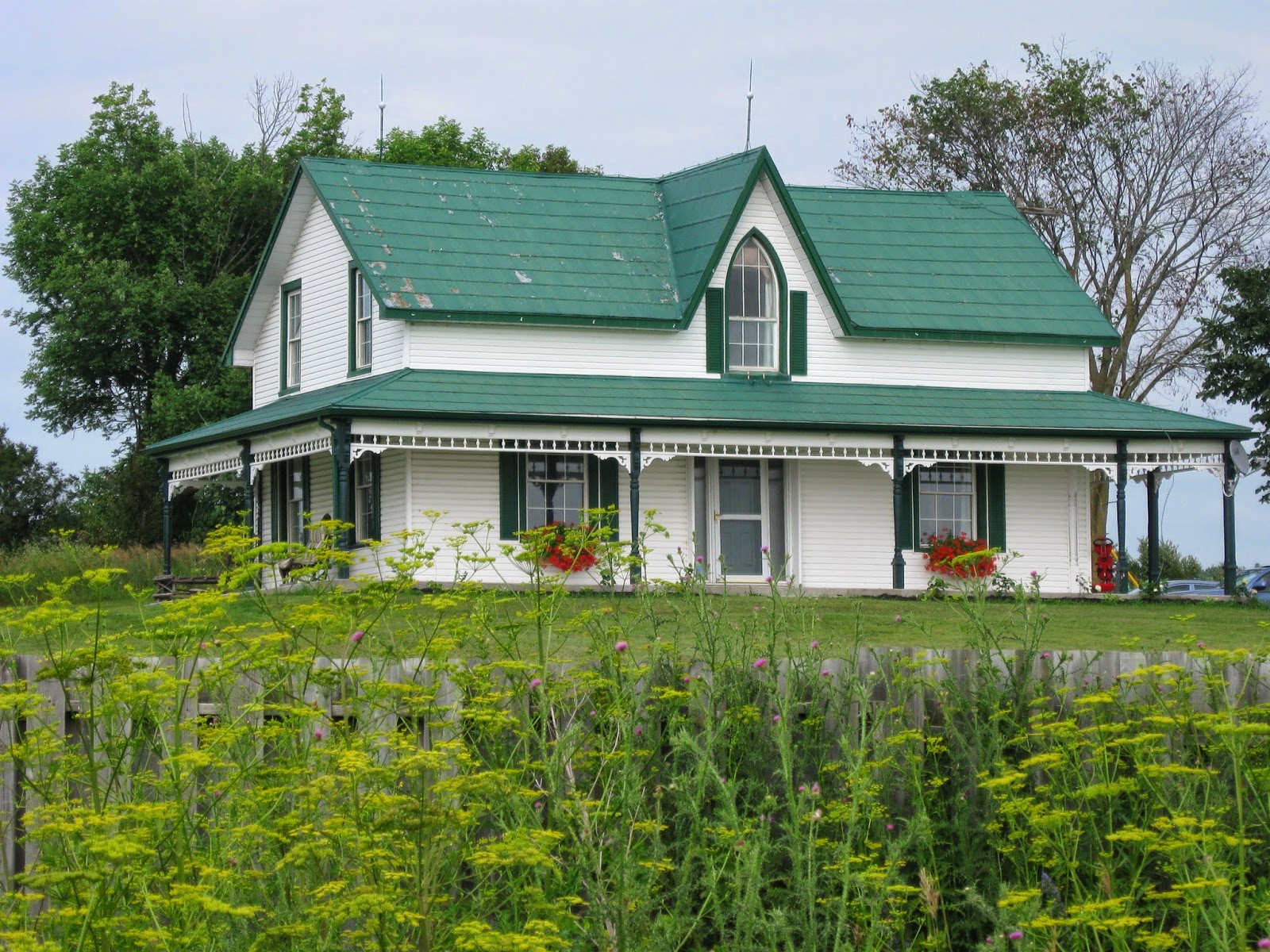 On a hill just east of Stirling, holding its head proudly above the slow encroachment of car washes and industrial retail spots, is this fine home. Its wrap-around verandah with delicate trim appeals, as does the prim green and white treatment. 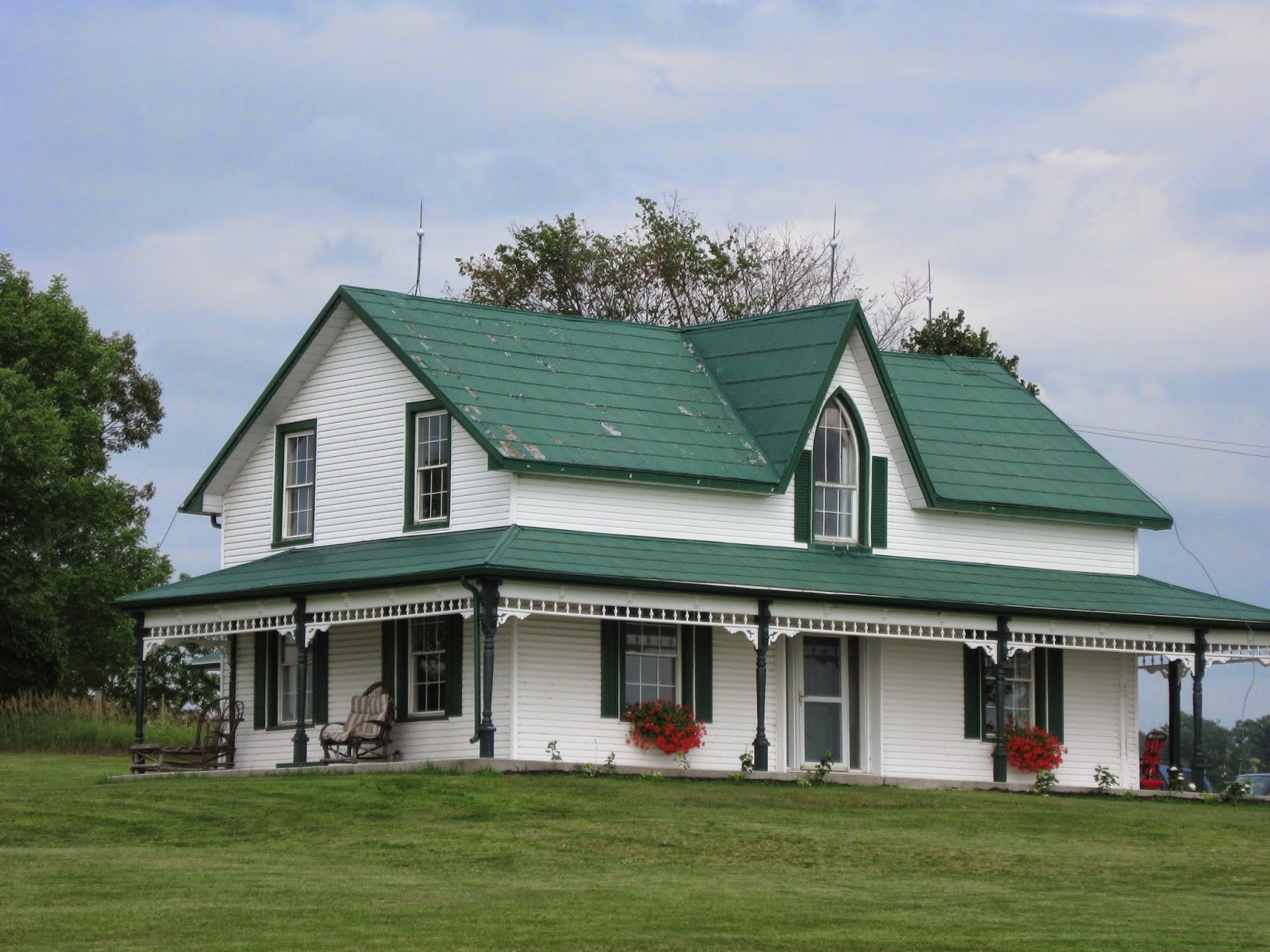 The ubiquitous Gothic gable window completes the Ontario farmhouse stying, which never looked better than on this well-treed hillside setting. 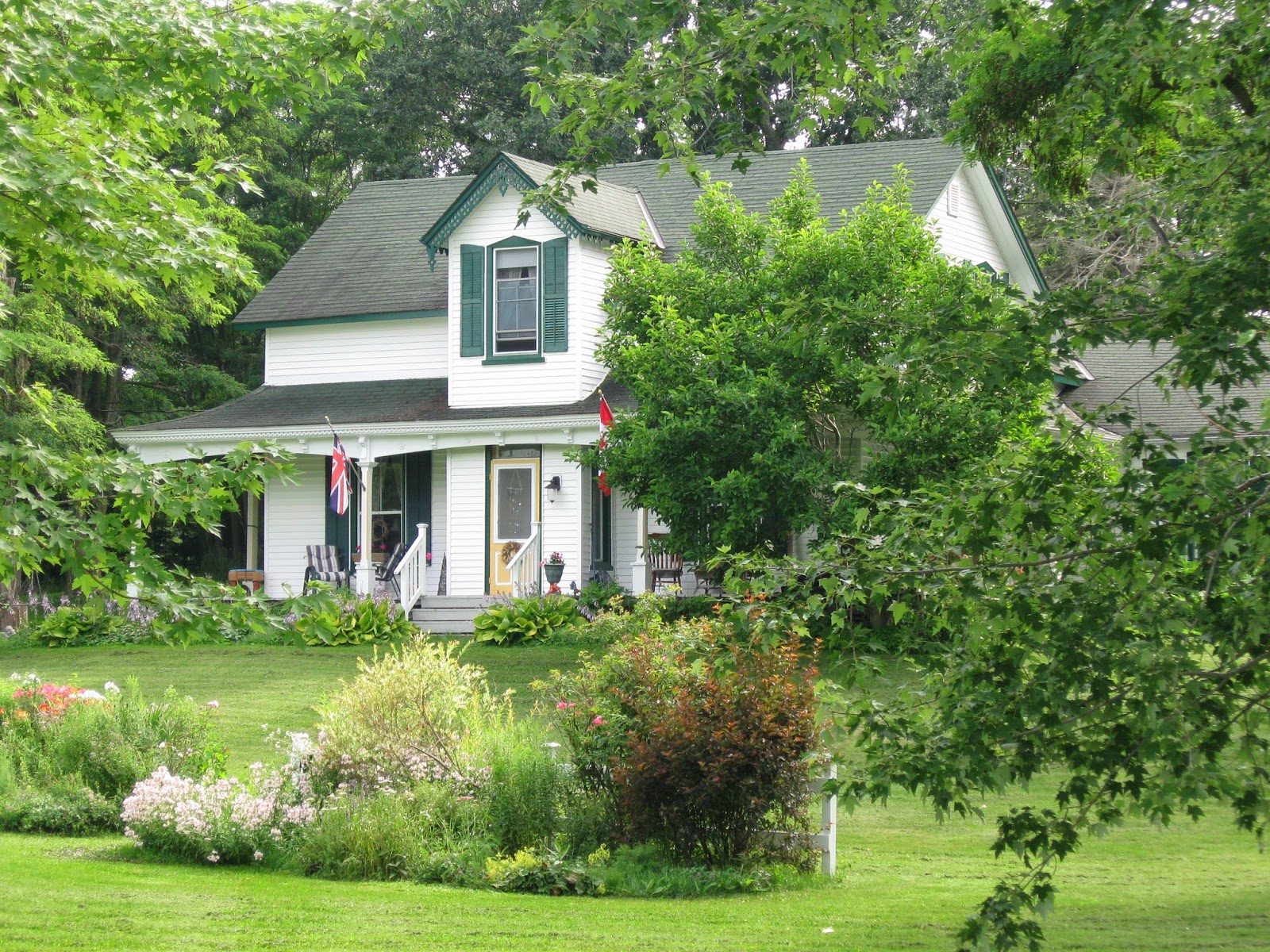 A few minutes east along Highway 14 is this other lovely green and white treasure sheltering amidst trees and gardens.A photo of the house appears in A Decade of Sundays - Quinte Walking Tours Volume 1, published by ACO Quinte Region in 1994.

The book explains that the kitchen tail (barely visible to the side) was likely built by a Peter Davidson in 1818-19. The place was bought by James Vanderwater in 1820 and willed to his son Peter. The original part of the house is said to be framed with 6"x 8"timbers. 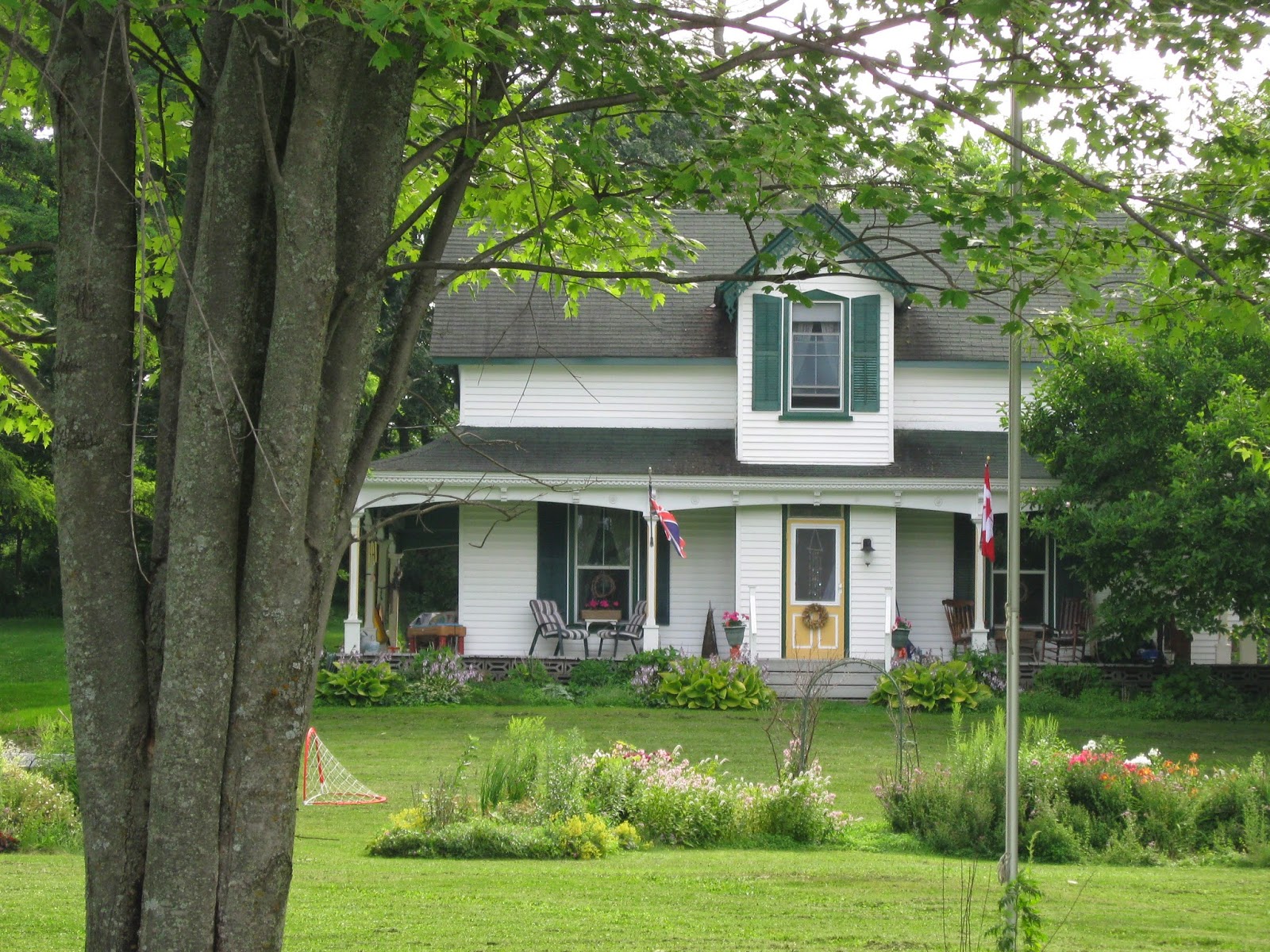 As of the publication date, the house was still in the same family. So well-kept. Love the wrap-around verandah with its curved roof, and the two storey projecting vestibule. 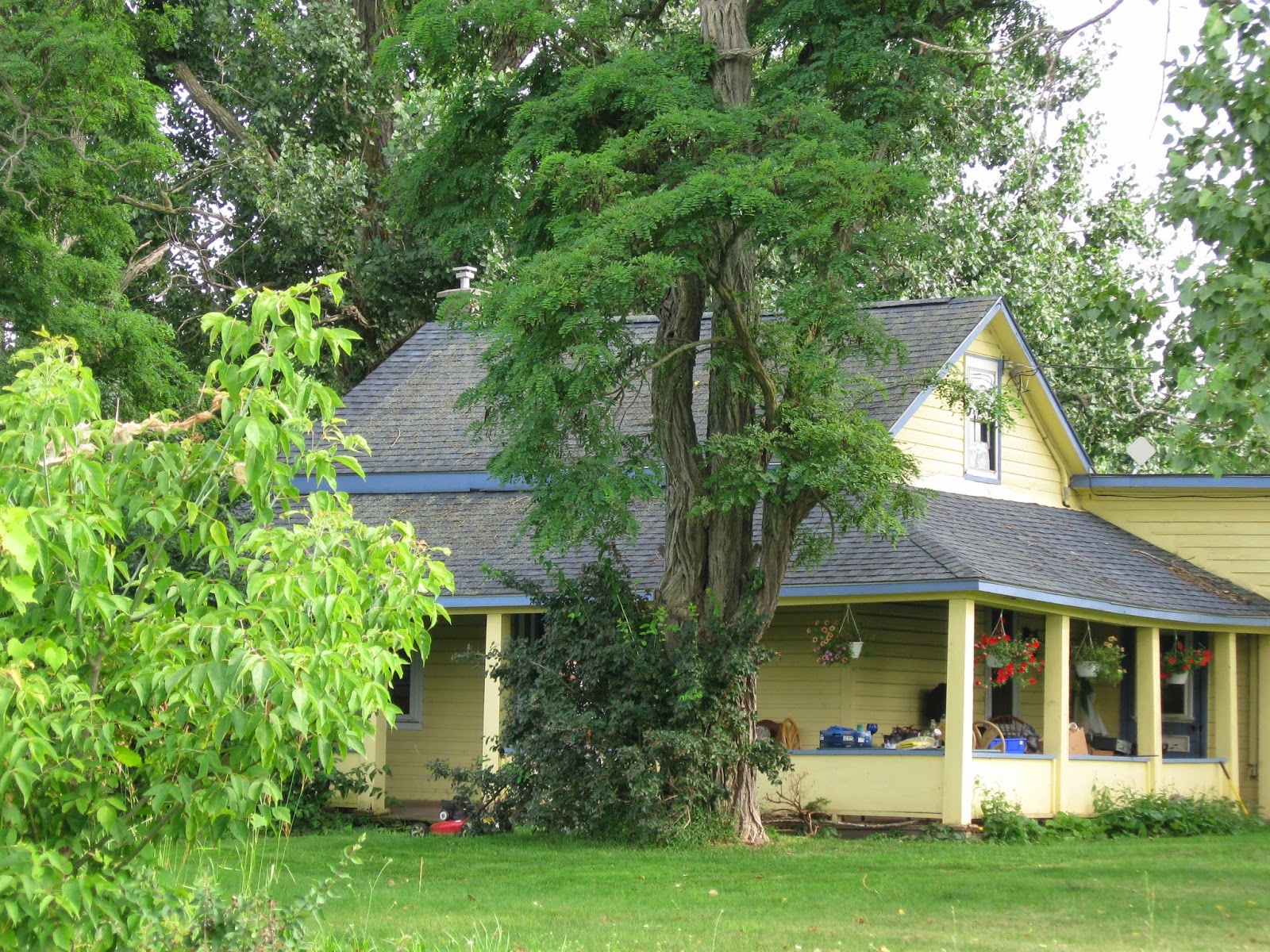 Directly to the east is a tiny yellow frame cottage. In the notes for a 1990 ACO bus tour of Sidney Township (which I obtained years ago from old-house friend Lois) it is described as Vanderwater House #2, built in 1860 as a temporary family home while the main house addition was built.

For years it was called 'the little brown house', despite appearances to the contrary. Turns out, there was brown-painted tongue and groove under subsequent cladding; the mystery was solved by a clapboard malfunction in 1989.

Now, it only someone could tell me about the house at the top of this post!
Posted by Ancestral Roofs at 10:19 AM