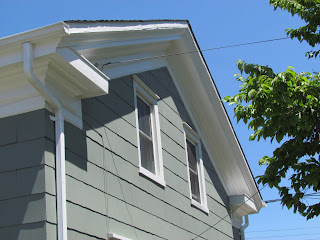 In my wanders around towns and villages, exploring our built heritage, I occasionally run into people who engage me in conversation about their old homes and their restoration plans. I'm always struck by the crazy amount of work and dedication that goes into rescuing a house with a long history - a history which includes unsympathetic changes over the years, made for practical reasons like a need for space, for insulating against winter cold, or replacing old elements that have worn out (always facing the exigencies of budget and time.) 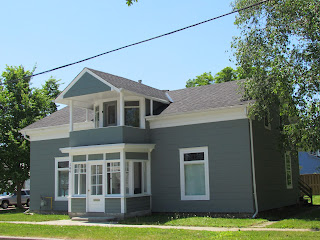 Last June, while brother Eric was undergoing a knee procedure at Trenton hospital, I had an opportunity finally to wander some of the old residential streets of Trenton. I don't know much of the history of this often maligned city, but clearly it was a city of some wealth and taste in its day. Its lumbering and shipping industries created wealth for a few, work for many. Although many of the fine old houses are poorly maintained, and/or divided into apartments rented by folks who don't clearly appreciate their heritage by owners who maybe can't afford to care, these places all tell their story. 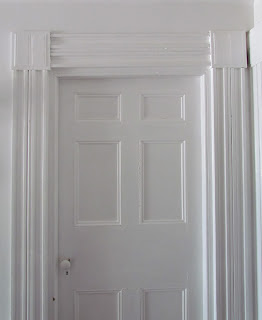 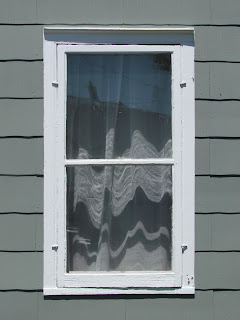 And here and there is a fine old house, loved and preserved by knowledgeable owners.

I met a great couple, Angela and Brian, on my walkabout. As I stopped to capture a nice eaves return and mouldings that appealed to me, their owner appeared, and a sidewalk conversation turned into a pleasant visit. Long story short, Angela was summoned from her home office, and we toured the house together, inside and out, the couple sharing the discoveries they'd been making as they peeled back the layers  while working on rescuing the house from its fixer-upper state. Layers, literally, as many of the clues they've uncovered as to the age of the house, additions, and updates have been gleaned from newspapers in the walls! Painting. Retaining as many elements as they can. Sourcing missing bits, like a fireplace insert which they found online, salvaged from a demolished home. 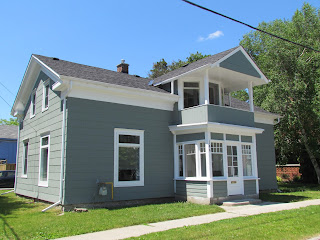 The owners have tried to find out more of the home's history. Documentation suggests it was built about 1874. Detective work in the garage wing revealed its origins in the late 1880's. It likely started out as a farmhouse on the edge of the village - Trenton was incorporated in 1853 (says Wiki )

Great floors, mantel, interior millwork. A unique porch. And the best thing about the house - great hard-working owners interested in the story it tells.

Posted by Ancestral Roofs at 11:57 AM