A few years ago, I maintained a blog named In Search of Al Purdy. On behalf of the Al Purdy A-frame Association, I was compiling a list of all the local place names found in Purdy's work, with the goal of  someday developing a literary tour of the area. Although the blog is long dormant, I want to link you with this post about Rednersville; Al's poetry and its power to evoke the historical village remain. 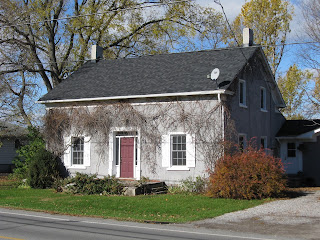 If you've followed the link, that's really all I have to say.But then...

I was in Rednersville a week ago, interviewing a most interesting couple who have recreated one of the village's most historic stone homes. While I was there, I wandered around the village, and took a few photos to refresh my memory. The Settler's Dream features a great account of the village history, and describes a number of the significant homes. Thought I'd share a bit. 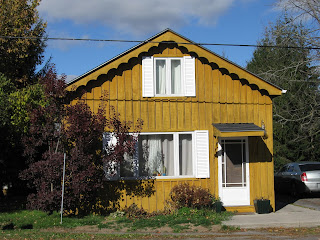 Darling is not a word I use often, but the tiny brick  former Methodist Manse qualifies. According to Stokes et al, it was built in 1861. A view from the kitchen tail, past the owner's orchids and down the slope to the bayshore, takes the fortunate visitor back to the 'Barley Days' of the 1880s, when wagonloads of grain lined the roads, awaiting offloading at the flourishing Redner wharves. The little stucco over stone next door, with its fine doorcase...ditto. Darling. The yellow house has had work done, but still has dignity. I wonder if it might be the early frame store in the B.Napier Simpson photo in The Settler's Dream. The low pitch of the roof looks similar; shame the astonishing 15x15 sash shop windows are long gone. 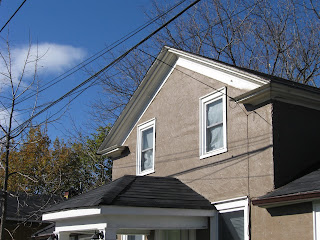 I like the neighbouring gable front house with the flanking single storey wings suggesting temple form. Its best features are the heavy Greek Revival mouldings around the windows, along the cornice and the eaves returns are the best feature. Gable end forward, in the Greek revival manner. Nice the way the grey-clad walls work with the white mouldings. 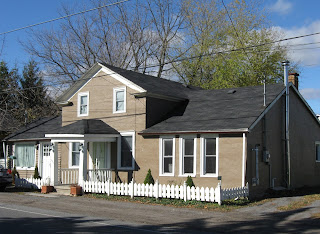 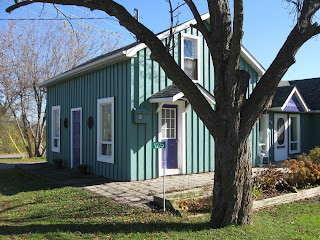 This crisply clad board and batten house is a delight for the colour scheme; its owners have created a sweet country cottage. I suspect it's an early house also. Sweet and simple. 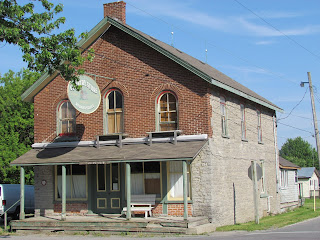 Not surprisingly, with a name like Rednersville, the village has some passing acquaintance with the pioneer UEL Redner family. They were "the guiding entrepreneurial force that determined the growth of the village" according to Stokes and Cruikshank (The Settler's Dream 1984.) By the 1870s the self-sufficient village had peaked at 200 souls. 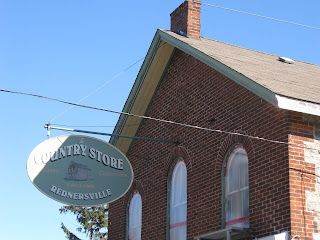 This wonderfully evocative stone country store sits on a lot sold to James Redner in 1851. For years it was called "the oldest general store in Ontario." Sadly, this village landmark is now closed. But the verandah still looks like the perfect spot for an ice-cream.

Around 1865 the stone facade was damaged in a fire, and replaced with brick, and those lovely arched windows. It's waiting for its renaissance. 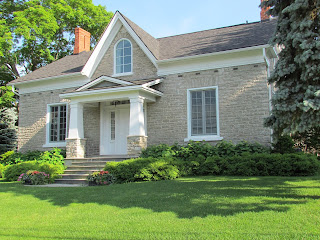 This exquisite stone house was built by James Redner, wharfinger, farmer, merchant, grain dealer, around 1830. Elegant details like the casement windows and the chinoiserie glazing in the fine doorcase set it apart. It is set on a rise overlooking the shore where Redner's fortunes were made. 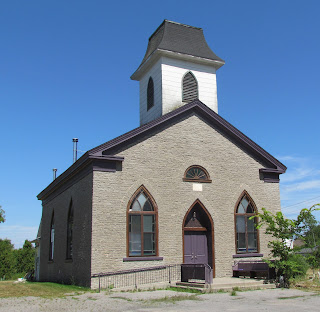 The rural Gothic low-pitched roofed Methodist church (1849) is said to be built of limestone pulled from the escarpment across the road. I wrote about the building, now home to an artist/impresario, in a past issue of County and Quinte Living.

Posted by Ancestral Roofs at 5:53 PM