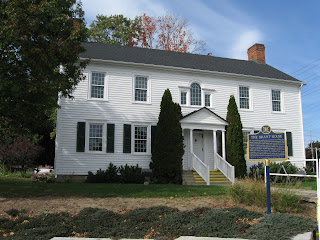 A year ago, LOML and I were in St. Catharines on business (his.) After the period of reading in the car had come to a close, it became my turn. The Arrangement. I've spoken about it before. 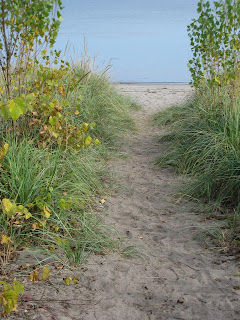 The deal was a few hours to walk about Olde Oakville. No QEW would do. Eastport Drive and Lakeshore Road beckoned. The 400 series roads are useful, but they destroy completely our understanding of 'the lay of the land', the connections between the natural world of ravines and bays and the communities which were spawned by them. The old roads can be slow. But not necessarily bad, this slow. 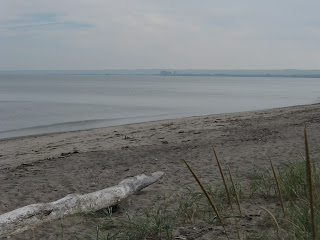 So, we were proceeding slowly along, eyes on Lake Ontario, grabbing the occasional side-street side-trip to stand along the Waterfront Trail, when pow! A bright white Georgian frame house appeared on a slight rise to our left, dwarfing by its presence the taller buildings around and behind it.

Palladian window, crisp 12x12 sash windows, portico guarding a plain Georgian doorway with prim round fanlight above. Didn't go in, but circled the house on its fall-bright property. Sure looks old. Sure in fine shape. 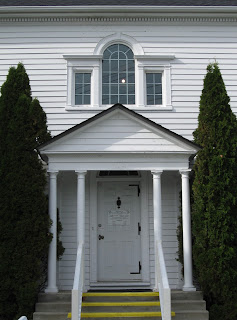 So what have we here? This is The Brant House - that part's easy, there's an Ontario Heritage plaque with the details. The house is a replica of the original frame house on the site which was built in 1800, demolished 1932, recreated in 1937/8. The house belonged to no less a personage than Mohawk Chief (Thayendanegea) Joseph Brant. He built it on part of 3500 acres he was granted by the British Crown for his loyalty and support during both the Seven Years War and the American Revolution. He lived here until 1807; his widow and youngest son Captain John Brant stayed on. The town which grew up in the area was called Wellington Square. 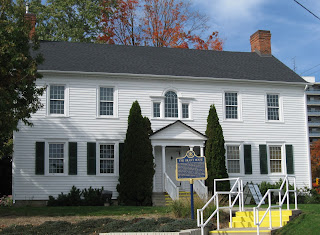 Terry Boyle also takes up the story in his book Hidden Ontario: Secrets from Ontario's Past and provides interesting details about the house (the timber reportedly brought from Kingston) and the earliest settlers on parcels of land which Joseph sold to Loyalist friends from his 3450 acre grant.

The house contains a  museum featuring among other displays, some original gifts to Brant from the Crown. An important personage indeed. This link to vitacollections Burlington contains some interesting early photos of the area.

The importance of the Brant family and the Mohawk people of (today's) upstate New York to the Crown's aspirations in North America can't be underestimated. I still only have bits and pieces of the story.

Interesting that the current issue of Foundations, the journal of the Frontenac Heritage Foundation, featured an article about another famous Loyalist Mohawk - Molly Brant, Joseph's sister. The piece centred on the creation of a new elementary school named for the Mohawk matron, and provided her story. 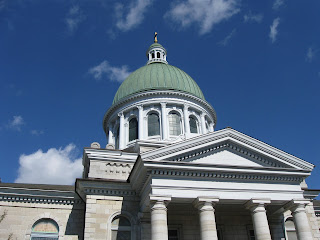 Molly (Gonwatsijayenni) and her brother Joseph took the name of their widowed mother's second husband, Brant. Foundations recounts that she was born around 1736, and "raised in a Mohawk culture that was highly anglicized." For good or ill, it put the siblings in a good position to bridge the gap between two cultures. The Brants both worked to ensure the Anglo-Iroquois allegiances during the American revolution.

For this service, like other Loyalists, the Mohawk people received land - at Tyendinaga near here, and to the west, the area around Brantford. 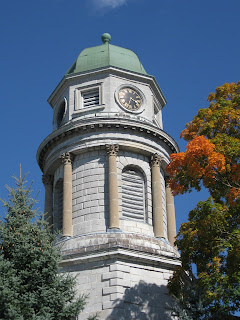 Peggy Dymond Leavey has recently published a book, Molly Brant: Mohawk Loyalist and Diplomat. I know that it's on the shelf at the Trent Port Historical Society awaiting my next  research trip (where I get to enjoy one of  their terrific lunches.

Molly Brant formed a liaison with General William Johnson, the British 'Superintendent for Northern Indian Affairs.' The couple had nine children, and made a home together. Molly lived her later years in Kingston, receiving a pension from the crown for her services. She is remembered with a plaque at the magnificent St. George's Anglican Church, of which she was a charter member. This account of Molly's life is too brief - her diplomatic and political influence was huge. Suggest we all read Peggy Leavey's book.

The places old houses take us.
Posted by Ancestral Roofs at 1:30 PM