Today I feel like reliving one of my favourite kinds of day, waking up in a campsite at a provincial park and spending the day exploring the built heritage in the surrounding countryside. And on this particular day, July 2015 (!) I left the charms of Charleston Lake PP for a road trip to Maitland.

I'd been thinking of this for a while, never getting further than the charms of Brockville or the old communities along the Front of Yonge. 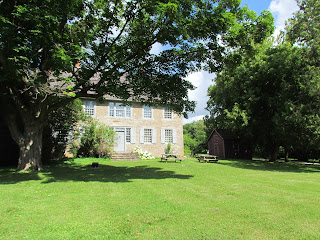 This five-bay Georgian fieldstone house is truly one of Ontario's oldest, built about 1801. The name of the contractor/builder survives - Louis Briere of Montreal. The French Canadian accent shows in the steeply pitched roof and window shutters.

The house features those early appearing half sidelights. Such a beauty - the Venetian window, twenty-eight 12x12 windows, centre hall plan, enclosed staircases...Sadly, the museum doesn't allow photos, so I am unable to recall, or share, much about the interior. It was outstanding, and very close to original in most areas. 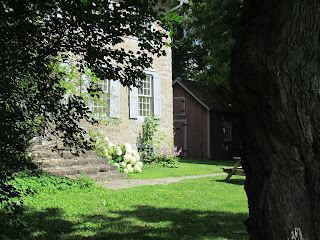 The setting is so peaceful and lovely that it's hard to grasp the energy and initiative of the six generations of Joneses who lived very different lives there. It was the Loyalist refugee story writ once again, and writ large.

Loyalist Solomon Jones surgeon's mate in the British Jessup's Rangers, quickly wore out his welcome in the revolting states and found it wise to leave the country for Quebec during the Revolutionary War. They later moved to the St. Lawrence River, where Jones became the only doctor from Kingston to Cornwall. 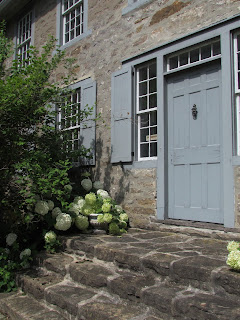 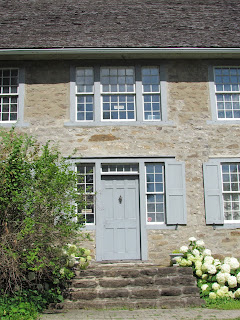 A span of accomplished Jones followed,  a force to be reckoned with. Son Andrew grew the farm into dairy and market produce. His son Harold became a very successful orchardist. Son Justus sold the property to chemical company Du Pont of Canada in 1951, but kept the house until his death in 1972, whereupon Du Pont took over and prepared to demolish the house. Please don't let it end like this! 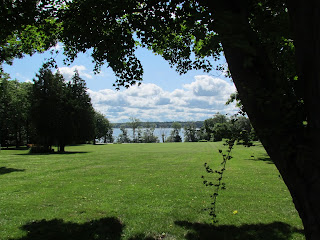 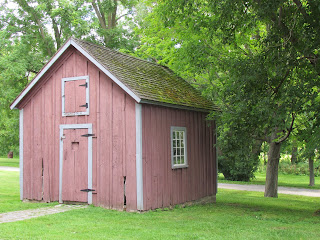 The Grenville County Historical Society stood resolutely in the way of progress and negotiated Du Pont's donation of the house and 11 acres to the Ontario Heritage Foundation. Descendant Monica Jones assisted with interpretation of the house, and the return of family furniture and heirlooms. 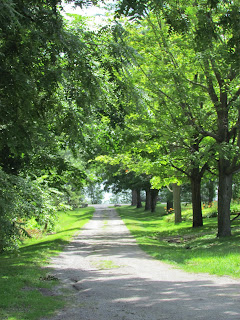 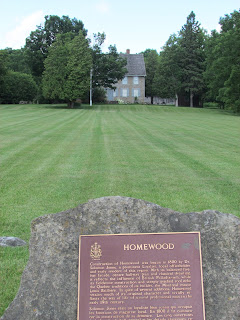 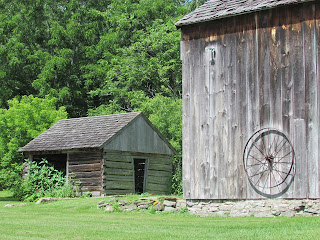 The apple shed, log shed, barn and ice house still stand on the beautifully maintained property.And oh, that tree-lined drive with the St. Lawrence sparkling in the distance. 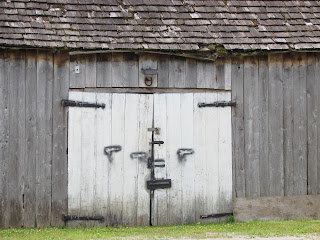 Posted by Ancestral Roofs at 3:57 PM