I struggle to take this place seriously.
But only for one 'teeny tiny' little fact.

The place is breathtaking. Sure. And it's on King Street East, a neighbourhood of superb old houses in one of my favourite house history towns, Brockville. When the house was built in 1899/01 the property extended down to the river, where the owner berthed a luxury yacht. The family entertained the rich and famous.

But it's those 'pink pills for pale people'! This limestone pile was the summer residence of self-made millionaire and later Canadian Senator, George Taylor Fulford, a farm boy who  made good. 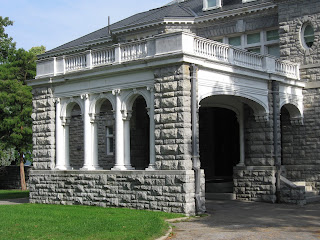 Fulford worked for a chemist, purchased the rights to a tonic made by a local doctor, and made his fortunes in patent medicine's heyday by mass advertising to a gullible public. Not much is made of this less than glam start-up, but a great deal of his lifestyle of the rich and famous. May I be frank? I get a little bit stuck on Fulford's Pink Pills; their iron sulphate/starch/sugar recipe bilked the poor, ignorant and ill, through what would today be termed phony advertising claims. 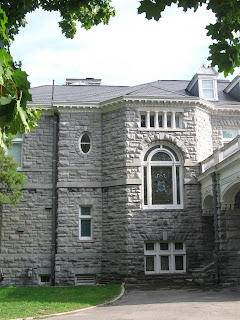 That being said, the Fulford Place grounds are absolutely stunning. They were created by the prestigious Frederick Olmstead  Brothers who designed roadways, posh neighbourhoods and parks - think Central - in the US and Canada. They were restored to their garden-party elegance by Ontario Heritage Trust in the early 2000s. Here's a link to the story (and an image which I regret, I didn't have time to record.)

The grounds originally extended to the St. Lawrence River down the hill. In the early 1960s, son George II arranged to have the property subdivided. Rockcliffe Road and West Fulford Place popped up in their place, exclusive stone-gate-posted subdivision streets (my history friend Dot says the gatehouse still exists) where not even Streetview dares to tread.

The architect was Albert W. Fuller. 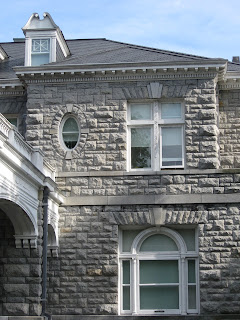 The OHT account online is well worth browsing; this is just a precis. It describes the rough-faced stone walls and fine dressed window surrounds, a variety of windows, six with stained glass, slate roof, balustrades and dormers. I see colonnades. Expansive verandahs with wood balusters, slender columns and sweeping staircases.  It takes a while to take it all in.

Even tactful OHT calls it "a showplace," Fulford's place to "display his social standing" and "ease his entry into the ranks of the Canadian political establishment and among the wealthy Americans who vacationed in the Thousand Islands."
Very Gatsby. 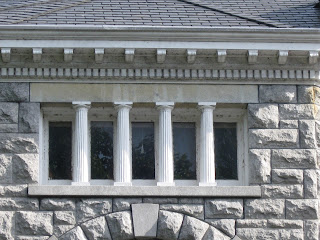 The Ontario Heritage Trust describes the style as Edwardian, which in its poshest form offers slightly OTT classical detailing. "Great scale and grand gesture" is a phrase I like, discovered in an article by Sally Gibson about Toronto's 1903 'Edwardian Baroque' King Edward Hotel. The Fulford's St. Lawrence River estate was just the perfect setting for a life of entertaining the wealthy, powerful and royal. 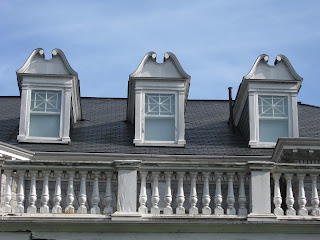 We plebs can experience the life, however, swanning about the 20,000 square feet even today, as the stately home features "most of the original furniture, fixtures, dinnerware, linens and objets d'art" (Historic Sites and Monuments Board plaque.) Fulford Place was opened as a museum in 1993 following George Fulford II's 1887 donation of the house to the National Heritage Trust, and the later gifting of the home's contents by his widow and heir. 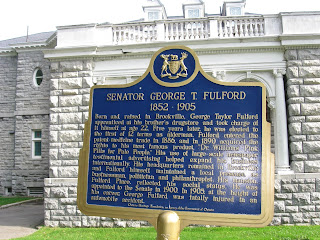 An irony. Among Fulford's proud acquisitions was an automobile. I read somewhere that he is thought to be the first Canadian to die in a car accident. At 53.

Here's a great article about the refloating of Fulford's steam yacht Cangarda. Incidentally, if you're interested in Brockville and island life (no, those islands) you'll want to check in with the publication Thousand Islands Life. The online magazine is put together by Kim Lunman of Thousand Islands Ink. Her photos of the 1000 islands are almost as good as a holiday!

Here's a style resource I found in my research. I'll leave it here so we don't lose track of it.

Here's a link to Heritage Gardens.
Posted by Ancestral Roofs at 12:13 PM