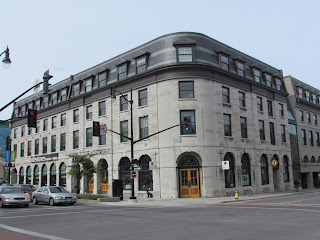 The architecture classic The Old Stones of Kingston (Margaret Angus, U of T Press, 1966) contains a fascinating account of three commercial buildings built in the city in the optimistic 1840s, when Kingston was the capital (briefly) of the new United Province of Canada. The Province of Canada existed from 1841 until the Fathers managed to get everyone to join up in 1867.

The naming of the capital at Kingston led to a building boom of impressive civic and commercial buildings befitting a capital city, and a spate of fine stone double houses and terraces, providing rental accommodation for the burgeoning population.

The best example of this "we'll grow into it" architecture is Kingston's City Hall, designed by George Browne. More on that another time.

Browne designed three dressed for success commercial buildings in that 1841-43 flutter, distinguished by a common feature - a curved corner.  The building I'm enjoying today (and would have enjoyed more last Friday were it not for the damp wind) is the Commercial Mart (although that name doesn't get bandied about today.) The building started small, a house and store built in 1820; it was owned by merchant and developer Charles Hales from 1837-9, when he moved to his new place, Bellevue House.


The building continued to grow (I love finding these bits of house history; we have a tendency to think a structure "was always like this") with two more house plus store additions. Fortunately, the new sections continued the rhythm of arches and string course.The attic storey with pedimented dormers was a later addition. 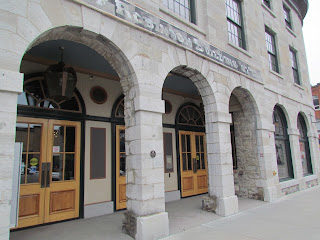 The building housed the Weber and Wormworth piano factory in the 1860s; after WWII, Federal Government offices and warehouses.  The Commercial Building was home to S&R Department store from 1959 - 2009 - the faded Smith and Robinson Building signage is still visible above the entrance.

A 2011/12 refurbishment has improved the venerable building's chances of survival. 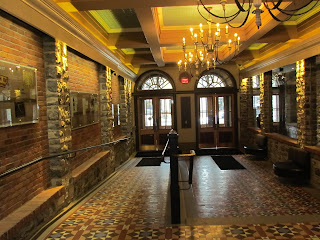 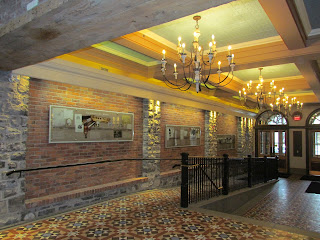 Frontenac Heritage Founation toured the newly refurbished building in 2013; here are some photos.

The gorgeous lobby of the building, home to accountants' and lawyers' offices and  Milestones Restaurant, displays historic photos and building history. Milestones' window seats are a great place to eat, drink and watch Kingston go by.

Of course, Don Cherry had hoped for a hockey museum there. 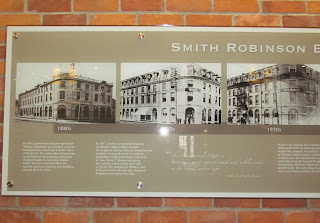 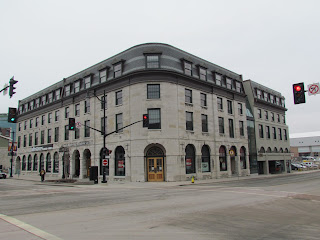 Incidentally, some of these photos were taken on a previous visit (when there were leaves.) This visit, I appreciated the view from the warmth of Peter's Place restaurant, a toasted western with chips and gravy respite from the steady diet of snails in sriracha butter,  roasted octopus or pickled eggs with kimchi or polpette of rabbit on offer in Kingston's many trendier spots.

To close, here's a Streetview view of George Browne's other round-cornered building, Wilson's Buildings, built in 1842. Some changes, but much remains. The same cannot be said of the third in the set, Mowat's round corner building of shops and residences, built 1841. It stood at the corner of Princess and Bagot and was demolished in 1974. Those banks again.

Posted by Ancestral Roofs at 1:04 PM