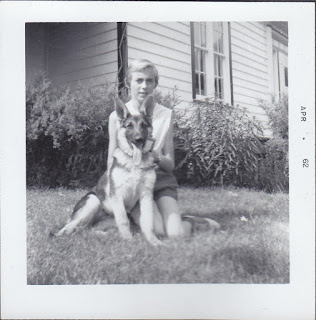 Battersea and I have history. Actually, our whole family does.One day back in the early 60s, we travelled the daunting distance to Battersea from our native North Marysburgh township, to buy a dog. A really fine dog. Dutchess she was named, short for her registered name of Winnifred Dutchess I Bee. But this isn't an old dog story. It's an old house story. Quelle surprise. 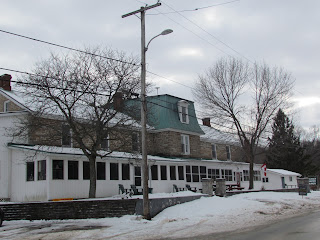 Not long ago I returned to Battersea after nearly 60 years. Part of my current discover Frontenac mission. Of course I recalled nothing of the village. Doubt if I noticed anything about it way back then in my pre-teen dog fever. But this time, despite the icy winds and matching roads and paths, I did discover something that will bring me back. 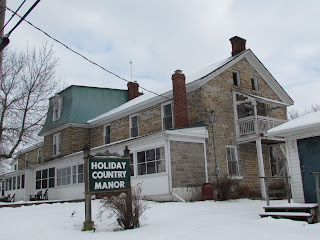 I want to know more about this structure. I wondered at first if there were an early Georgian style wing, and a later matching wing flanking  the 'tower' topped by the rather incongruous Mansard roof. According to an online account by Clausewitz (2008) the Lodge was built for military veteran Henry Van Luven (1794-1891), by stone masons recently retired from the Rideau Canal project. (Lots of fine stone houses in the area would lay claim to the same origins, I would assume.) 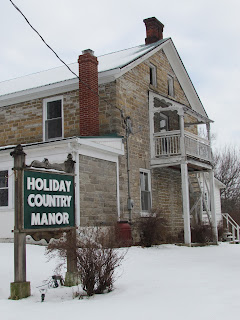 Well it's not the Columbia Inn in Pine Tree, Vermont, the lodge featured in our favourite, recently revisited Christmas classic, White Christmas. But it has some stories to tell.

Here's a better look at the place, unfettered by icy walking-with-a-camera conditions.


In 1840 Henry Van Luven developed the street plan for the village - first Rockland, later Van Luven's Mills - and opened its post office (as Battersea) after 1867.

I found it most interesting (as I am doing some research about Sir John A this month) that when Henry became reeve of Storrington township in 1850, fellow public servant John A Macdonald is said to have visited The Manor regularly.

The story goes that in 1912, The Manor became a fishing lodge, which it has continued to be, under various owners since then. This article introduces the July 2016 new owners, and their plans for the Manor. 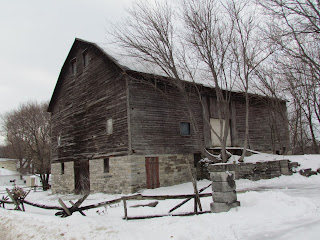 Probably not surprisingly, given he was a nation-builder kind of guy,  Van Luven also built Battersea's first stone mill, later operated by the Anglins, a name which pops up often in local history. Mill Street is definitely on my list for a future visit.
As is Battersea's history. The most obliging folks at Belleville Public Library are holding an interlibrary loan volume for me, of The County of a Thousand Lakes, the 1982 Frontenac history compilation. 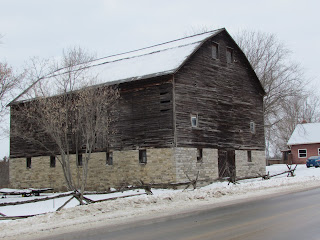 Across the road, near the little marina where once stood one of Battersea's mills, was this fine old barn. Wouldn't I like to know it's history.

Posted by Ancestral Roofs at 4:48 PM