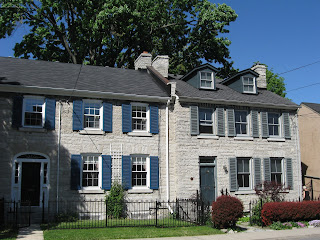 Remember that line from the story of Aladdin? A nefarious sorcerer tricks Aladdin's wife into exchanging their battered old magic lamp for a shiny new one - with no magical powers.

I think I've painted myself into the proverbial corner, attempting to create a parallel with a situation I have recently sleuthed out on Princess Street in Kingston.

But you be the judge.

During our last couple of visits to Kingston's wonderful old downtown, my guy and I have attempted to figure out a new/old building being constructed on Princess Street.

We've wondered about the build, pondering what was there, as you do when a tree is suddenly absent from the landscape, and you feel the loss, ashamed that you didn't properly appreciate it when it was standing.

The before picture used to be available on Streetview, sadly the site was updated in 2018 to capture this new Streetview; the address is 101 to 109 Princess Street.  So now you're oriented. A photo of the demolition in progress used to be available, Gone too. Revisionist architectural history. 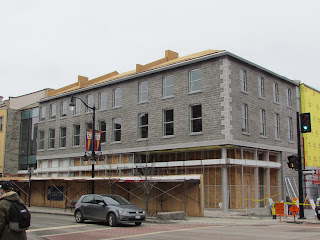 What's taking shape is a three storey stone building, steel frame construction, its form not dissimilar to others on the heritage-rich street. But the stone is puzzling. Is it old stone, cleaned? It's so crisp and cold compared to the rich old limestone nearby. But many of those date from the 1830s and the years would add patina, wouldn't they? Denis checked out the stone carefully last visit, peering through gaps in the plywood hoarding protecting us passersby. Dark grey stone building, pick faced in appearance, regularly coursed. Quoins with 'tooling', but I can't tell...might it be concrete? Hip roof shaping up. Windows look odd. Flat arches over segmentally arched windows - only two lights? Looks like a modern glass facade taking shape on the ground floor. 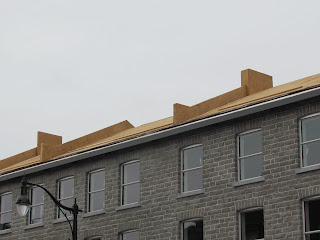 Kingston readers will be laughing up their sleeves by now, as they know the whole story.

What finally drove me online, checking out newspaper articles about the property, the heritage debate, the new building, was seeing it from a new vantage point at the corner of Wellington Street, fresh from admiring parapet walls of several early buildings. On the roof I noted bright new lumber being formed into the unmistakable shape of parapet walls. Or pretend ones. 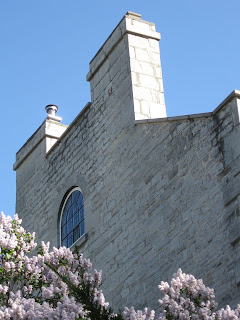 Here's a definition of a parapet, by the inestimable Peter John Stokes in the very useful glossary (because the memory isn't what it used to be) of The Settler's Dream: the extension of a wall above the roof line, usually at the gable end. 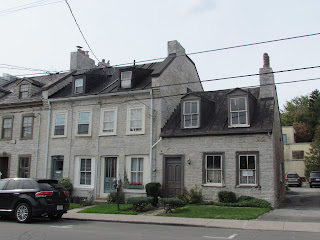 Fire was a clear and present danger (always wanted to use that quote) in early c19 towns. Shingled roofs, flammable sources of heat and light, wood construction, stables filled with hay...fires were inevitable.

At some point, most towns enacted regulations requiring fireproof walls between town buildings, extending far enough above the roof-line to reduce the chances of fires spreading across roof-tops. 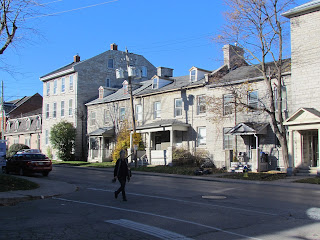 Above, with the lilacs, is a lovely example...I'm wondering if the end window might have been a temporary indulgence, as the owners waited for someone to build next door...or a happy add-in when that became unlikely. The other photos in this post are parapet walls in various Kingston locations.

Here, as they say, is the rest of the story. Turns out this location has been the focus of a heritage debate for some time. Here's the short story. At issue is a grouping of  early c19 stone buildings, covered in an ill-conceived 1960s/70s modernization, using stucco and countless nails which destroyed the stone, preventing it from being reused. And a bank that wanted the site.

Most links with stories about the debate have gone dark, and I've removed them.
Fortunately, these few remain active.
Here is the story of the decision, a regular Sophie's choice.
If you are a real heritage terrier, here are the Municipal Heritage Committee discussions.

I'm not alone in mourning the loss. Here's an interview with the president of the Kingston Heritage Foundation, an organization to which I belong, and whose work I salute.

So. Only one question remains. New and shiny? Or old and magic?
Posted by Ancestral Roofs at 9:20 PM