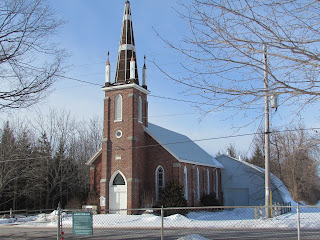 I've been in touch via email with three of the friendliest folks, community-minded people in the rural neighbourhood of Carman (no, not Carmen) north of Brighton in Northumberland county. Despite the fact that two of their number, Stephen and Shawnee, were in Florida (they offered assistance, in any case) I got to visit an historic rural school and church not long ago, and meet with Peter, a steward of local history. 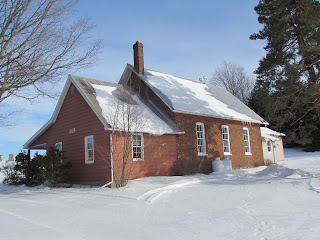 Peter is a retired dairy farmer from along the third concession, who, like Shawnee and Stephen, has lots of history with two buildings in the neighbourhood, and is working very hard with a group of like-minded folk to preserve them.

The  Streetview camera visited Carman Road late one autumn afternoon, so you can drive past the lovely farms with me. The Streetview people caught the same wonderful light captured by a painter whose work is on display in the school-house turned community hall. Her name is Ella VanSlyke and this was her homage to Carman.
The two red brick buildings are the school-house (now community hall and winter church) and church at Carman. School and church were often found in close proximity in early communities. In Carman, the school for S.S.#13 stood in several locations prior to its construction here in 1885. It made good sense to settle here, across the road from the 1879 Methodist Episcopal Church (United Church after 1925) with its churchyard nearby. Peter recalled playing ball in the cemetery (or did he say the game ended when a ball went out of bounds there?) and trudging through the woods behind the school to skate on a pond that appeared one day. Now there's a story.

The hall is warm and convenient. The kitchen additon replacing the original porch was built in the 1950s, and has hosted lots of community 'bun feeds' (Dad's word) over its history.

As I mentioned, the small congregation moves across the road to the warm hall for church services during the cold winter months, which explains the pile of hymn books and the collection plate in the foreground.

Peter pointed out the original indoor school washrooms, which eliminated that long trudge through the snow. Inside each, beaded pine walls, and surprisingly large windows. The boys' washroom displays the old water cooler, which the big lads would fill daily after their hike to a neighbouring farm to get a pail of water. The grey panels at the end of the room, beneath the Queen's portrait, cover the blackboards. 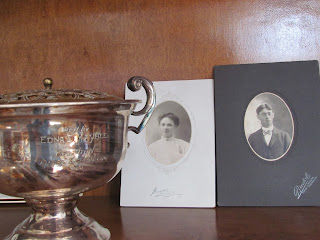 A display case containing old school books, and a number of artifacts requiring explanation caught my eye: evocative old photos of two sweet young teachers, and a grand silver cup won by Edna Maybee for her entry in the Brighton School Fair in the 1930s. And a tempting cupboard below...

Carman School closed in 1963, after 79 years of continuous service to the community. Many memories were made in this one-room school. 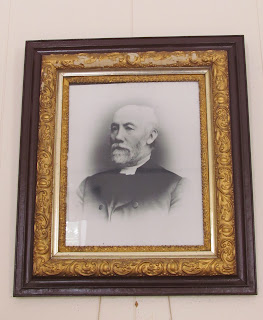 Peter next introduced me to artifacts telling Carman church's story. The worthy gentleman in the photo is the Reverend Bishop Albert Carman, General Superintendent of the Methodist Church from 1884 to 1914. The new church, opened in 1879, was named for him. He was also the principal of Albert College (not named after him.)

The reverend gentleman was guest speaker at the October 1879 opening of the Carman Church, originally called Pake's Chapel, named for several local adherents, who originally attended church in the earlier white frame 1851 chapel at this location. Early Methodist days: no organ, choral singing only, separate men and women's seating. 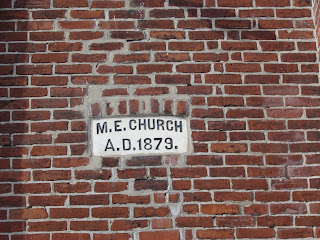 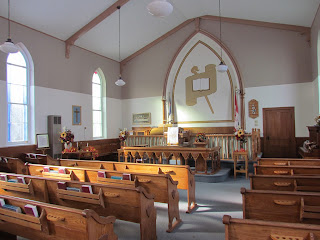 The first wedding, in September 1939, united Stirling Stewart and Edna Maybee (Peter's parents.) His roots run deep in this little church, which itself became United, in the exciting church union days of 1925.

These days, the congregation is shrinking, and sadly, the serene little church may have to close its doors. Happily, there are always volunteers ready to put together the special events for which Carman is well-known. The  1979 centennial church history A Century of Sharing recounts a century of feeding people:  pie socials, garden frolics and fowl suppers. There's a spaghetti supper scheduled in the near future. 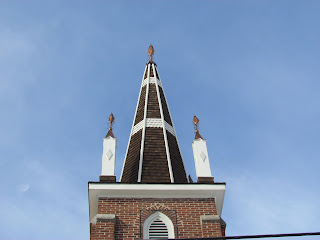 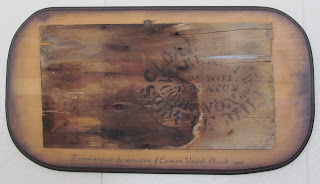 A note about the red brick Gothic revival style church, lovingly re-roofed in 2009. The photo to left is the underside of one of the steeple shingles removed and replaced at that time. Though it's difficult to see, some of the stencil reads: Cedar...Shingle Mill,  No. 1,
T. Heaton (?) Codrington, On.

If you can fill in the blanks, drop me a line. 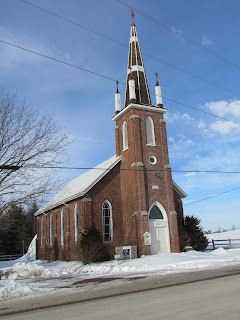 The sanctuary is a serene place, painted in cream and gold; tall pointed arch stained glass windows to east and west fill the space with light.

A browse through A Century of Sharing, a wonderfully detailed  church history published on the occasion of Carman United Church's centenary in 1979, revealed Peter's name among those on the centennial committee. Indeed, there seem to be plenty of  Stewarts in the area, and Maybees, Morgans and even a Chatten.

One lovely sentence stood out among the accounts of the new (1928) church shed -the venue for countless fowl suppers (65 cents a person in 1929), Sunday school picnics (the summer's highlight),  Mission Band pie socials, dime socials, the 1930 garden frolic, adult Bible class and young peoples' union, women's missionary society, later U.C.W. That sentence? "For almost a century the Sunday School was a determining influence in the church and community for young and old." Our world is so changed. But that spirit is still alive in Carman, almost 40 years after the 1979 publication of the book.

Makes me long for those simpler days of community, and nostalgic for my growing up years around the former Methodist church at Bongard's Corners. And glad that it still exists in spots like Carman, Northumberland County.

Posted by Ancestral Roofs at 8:36 PM