It's hard not to think of The Bay

The other day I was browsing for photos of Indian Head, Saskatchewan, checking to see if I had photographed the heritage train station there. Instead, I came across photographs from our 2013 visit to the town of Fort Qu'Appelle, Saskatchewan, during our most recent cross-country camping trip. We stayed in the Qu'Appelle Valley, a most outstanding bit of geology just off the Trans Canada at Indian Head. 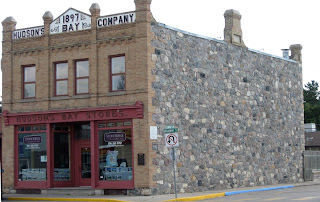 While in town, I shopped for a few old buildings and fell for this substantial fieldstone and brick commercial building on the town's undistinguished main street, Broadway. The 1897 Hudson's Bay Company Store.


The story asked to be told when we visited The Hudson's Bay Company in Kingston before Christmas, and noted that the  bright yellow logo had been replaced.

A story in the Globe and Mail unrolled a heritage moment for shoppers, explaining that the "big B" logo was being replaced by a more traditional look (a "large-scale rebranding" it's called) which includes a nod to its earliest iteration as a fur-trading post. The date 1670 and the traditional coat of arms are included. This is the best I can offer, scanned from a small bag for an even smaller purchase.

And the best I can offer by way of explanation for the change (if you're a marketing nut, you'll be loving this story) are the words of Rick Padulo  a marketing expert quoted in the story: "while the company is technically owned by Americans now...the nod to its heritage could still resonate with consumers."

Here is a link to the branding history of the store. 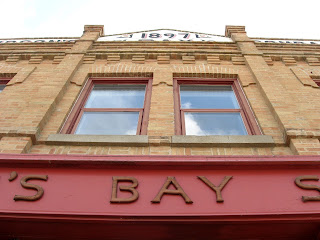 A plaque on the brick front of the Hudson's Bay Company Store in Fort Qu'Appelle reads:

"This building represents the transition of the Hudson's Bay Company from a fur trading operation to a retail merchandising business. Built in 1897 under the direction of Chief Factor Archibald McDonald it captured most of the trade on the north side of the Qu'Appelle Valley. McDonald oversaw its operation for 14 of the 20 years that the Bay owned the store. In 1917 the Bay sold it to Pioneer General Stores which ran it until 1987. The province bought the building in 1975 and undertook considerable stabilization. The store was sold to Jim Chaplin in 1985 and restored for commercial use." 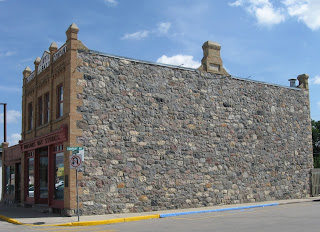 The summer we visited, the building was occupied by Stone Ridge Realty Inc.

This structure is taking the convention of fancy facade and plainer (read, cheaper) sides to a whole new level. The building is a fortress-like rectangle, two storeys tall, defiantly fieldstone rubble on the sides, with a brick facade clinging to the front. 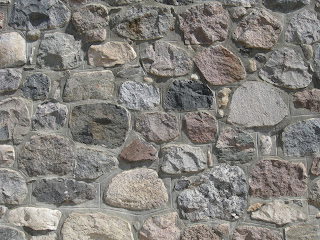 Imagine the work involved with splitting these granite fieldstones! I expect they were found along the banks of the river, washed down by the glacier which carved the valley out of the tabletop prairie above, although I suppose it's equally possible they were turned up when the prairie on the bench above was tilled.

Here is the moment, thanks to Streetview when Road 56 drops from flat prairie down to valley floor. Take the drive. It's even better in person. 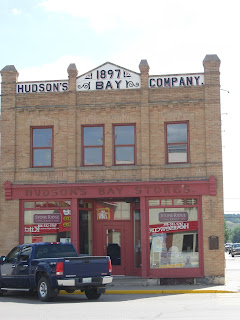 I'll blame bad light (and trying to eliminate as many pick-up trucks as possible) for the poor photo of the facade.

I'm guessing there are some cast iron elements in the nicely-painted shop front, can see the tell-tale embossed designs on the posts flanking the recessed entrance. The pale brickwork has some lovely touches. Brick pilasters ending in turrets with stone/cement caps, the two slimmer centre ones flanking a pair of windows, and dividing the facade into three bays. 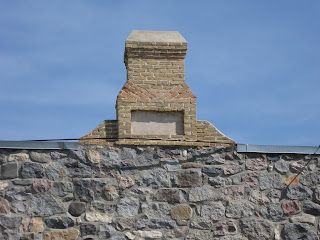 Over the windows are delicate window hoods in brick. A band of basket weave brickwork above the store sign. Bricks stepped out to form corbels below a band of stepped-out brick just beneath the roofline, creating a cornice. From the side you can see a bit of a boom-town extension in height.


The chimney is carefully wrought, even to the use of pinker brick for the shoulders. I read the building was extensively restored; not sure how much has been rebuilt.


The turrets marching along the top of the square building are a bit comical, seem to heighten its blockiness. At least one is/was a chimney.

Interestingly, there was a fieldstone house nearby along Company Avenue. 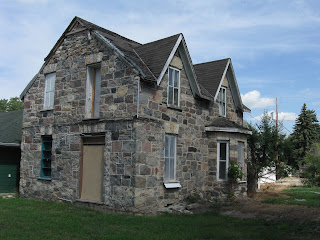 The same stone, though squared and and coursed. Wonder if it was a residence associated with the store? When we saw it, it was derelict. Do you suppose it might have a future? This Saskatchewan  government document implies committment, at some level,  to repurposing the province's heritage buildings. 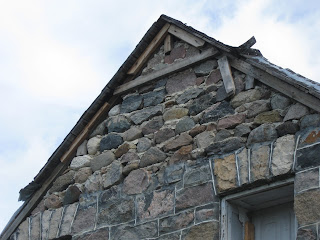 Rock-faced stone lintels with keystone. Nice stone bay. Interesting that in the eaves, the stonework is rubble. Could the eaves have been clad in planks?

Guess we'll have to make our way back to the Qu'Appelle Valley one day to get some questions answered. Now that I've poked around in this photo file, I believe we have another visit to the valley coming up. Virtual, I'm su-ah.

Join me? Mind the edge.
Posted by Ancestral Roofs at 10:38 AM