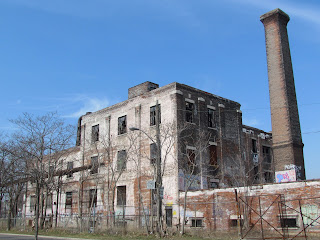 The most recent issue of architect Catherine Nasmith's outstanding online digest Built Heritage News contains a link to an article written by former provincial ACO president Richard Longley. The piece appeared in NOWToronto magazine and outlined the urgency for rethinking our late C19 and very early C20 industrial buildings - not demolishing them - and putting them to work.

He writes about 401 Richmond Street - a bit of warm brick in a street of featureless glass towers. This is a lively 'character' building housing a lively artistic/entrepreneurial community. The vision is to repurpose heritage industrial buildings, in this post-industrial Toronto. There are issues. Like taxes. But there is life here, and hope. Jane Jacobs would be at home here. 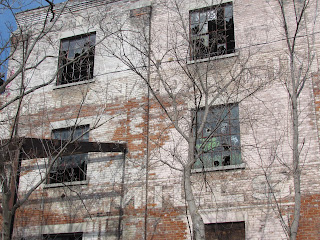 A phrase I loved: "crucibles of a post-industrial revolution." The creative industry, not weary factory workers producing widgets, will be the life of these places.

As I have never visited 401 Richmond, I have no photos to share, so will have to let Streetview take you there.

This inspiring article about heritage industrial conservation includes a profile of 4 worthy examples. Here's that link again, have a look. 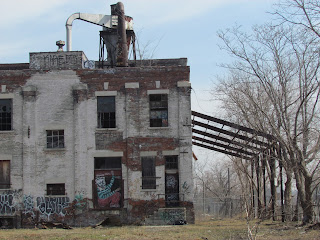 My small contribution to the conversation is these shots of a ruined industrial building on Wabash Avenue at Sorauren Park, near Roncesvalles Avenue in Parkdale. If you want to look around, here's a link to Streetview .

The structure is rotting away just adjacent to Sorauren Park, where a neighbourhood friend and I once celebrated the park's "world-famous" pumpkin parade, up to 2000 jack-o-lanterns twinkling in the dark and magical city night. (Photos) 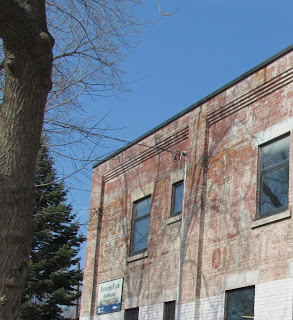 This neighbourhood ruin was once home to The Canada Linseed Mills (1910-1969) a cog in the industrial wheels along Sorauren south of the railway lines on Dundas. Other neighbourhood industries included a ball bearing plant, a leather goods manufacturer, and the Dominion Bridge Company, which occupied the space now enjoyed by park visitors. 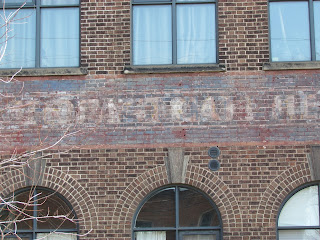 So, for some time the neighbourhood has held out hope that the old factory would just go away, and the park would take over the spot. I noticed when I visited that part of the industrial building has been adopted by the Sorauren Park Fieldhouse. New windows. Traces of old lettering.

As I continued my research I discovered the triumphant announcement that the old linseed factory is about to be demolished and the Wabash Community Centre built on its footprint. The wait has been a long one, the activism determined. Now the waiting appears to be time-sensitive, with dates attached for pre-engineering this year, design and engineering in 2018 and '19, and completion scheduled for '22 or '23.

Another post-industrial (to use Richard's term) building with a happier ending popped up during the same Roncy/Ronces walkabout.  The classically inspired entrance dignified a workmanlike building of beautiful brick, with new steel windows, but old ghost signs, which proved difficult to decipher. I admired for a bit, and later had a look-see online. This brick structure, which has adapted readily to loft condo development, is the c1907 premises of  Robert Watson's candy factory (which started in 1874 in Toronto.). After the industry tanked, the building became a grotty loft address popular with artists, and by 2007 it had completed the transition to condos. Here's a look inside. And outside.

This Star article dubs this a good conversion, ensuring the building's future. And adding character to the neighbourhood.

Richard Longley describes the demographic drawn to such buildings. I once experienced that first hand, when I visited the workplace of my pumpkin-party friend, who worked for a film company at the Centre for Social Innovation at 215 Spadina. Energy enough to keep any century old industrial building standing.

So. One lost. Others rescued and wisely re-purposed. Need a program to keep up? Turns out there is one. ACO Toronto has just launched TO Built, "an open-source database about buildings and structures in Toronto."
Posted by Ancestral Roofs at 8:48 PM