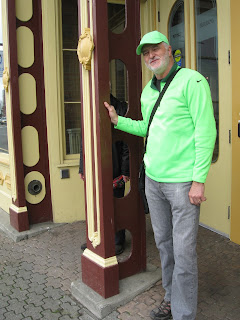 Walk this way, with apologies to John Cleese.

Seemed like the right way to introduce you to a great guy. The fellow in green, to your right, is Dave Mason. This is his (matching) card. Next time you're in Victoria, look him up. Dave can be found in the area of the Visitor Centre at the inner harbour. He is the city's best ambassador, and an engaging and informed walking tour guide. We spent a delightful afternoon walking about downtown - this after we'd walked the perimeter of James Bay peninsula. We were well matched for energy and enthusiasm. Where Dave had the edge was that he had all the stories. Without his insights, we would have missed SO much of the city's history and architecture.

Here are some examples. 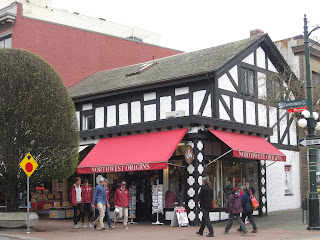 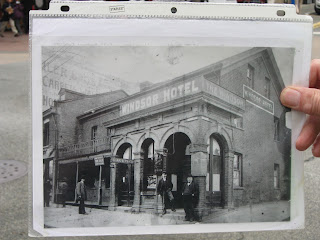 Where you or I might look at this and see a tacky fake Elizabethan half-timbered Victoria tourist trap, Dave pulls out of his knap-sack a photo of the Victoria (later Windsor) hotel, which enterprising George Richardson  built in 1858 to accommodate the hoardes of miners coming into town on their frantic way to the Fraser River gold rush. Here's more. 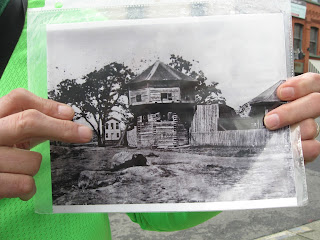 Without Dave's suggestion, we might have spent so much time looking up that we might have missed the tiles laid in downtown Victoria streets, outlining the footprint of Fort Victoria, the Hudson's Bay post which started it all. Have a look at Historic Places' backgrounder on the fort. 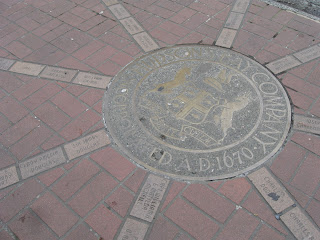 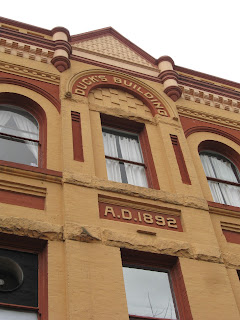 We would have failed to grasp the irony of Broad Street, and the ladies of the night who made it interesting. We wouldn't have heard about Stella Carroll, a madam who established her, er, establishment in the Duck's Block, owned by a protective local politician, Simeon Duck. This, courtesy of Greater Victoria Public Library. 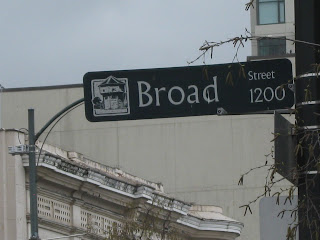 And I think it's quite likely that without Dave in the lead, we wouldn't have ventured into the curiosities of Chinatown and its rags and riches history, its narrow alleys, benevolent societies or secret half-storeys. 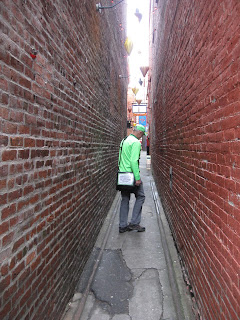 Or into posh places like E.A. Morris, Tobacconist, with its amazing 1910 interior.
Here's more on that spot, my first chance to get up close and personal with a priceless alabaster Electrolier.


Tell them Dave sent you.


Posted by Ancestral Roofs at 5:04 PM