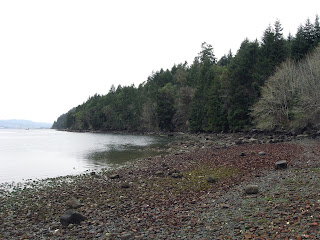 This is a rainy day photo of Brickyard Beach on Gabriola Island. The reddish hue comes from thousands of broken bits of clay brick. From the 1890s to 1951, the Gabriola Brickyard produced 80,000 handmade bricks a day, the gruelling labour supplied by locals and imported workers. 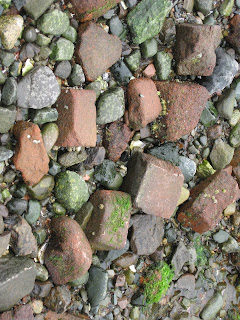 The historic plaque shows a photo of the works - the buildings were demolished in the 1950s and the few remaining foundations were quickly overtaken by the undergrowth. Thing grow fast in B.C. 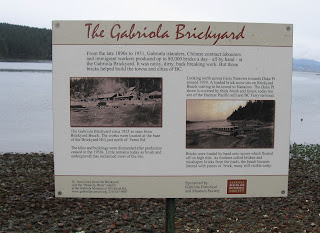 The brickyard history is featured on the Gabriola museum website, and the local Historical and Museum Society offers plenty of photos to help you travel back in BC's built heritage story. The journal of the Society,
SHALE, features an in-depth study by Jenni Gehlbach.; yet more info (and some of the same photos) are found in this article.

Dave Mason, our guide for a wonderful, if cloudy. walkabout in Victoria mentioned that the Victorian city used brick for many of its civic buildings: Victoria City Hall , the  Royal Theatre , the Board of Trade Building,  the  Law Chambers  and the  Provincial Courthouse. Without doubt, many of these bricks originated in this foggy cove on Gabriola Island.


We glimpsed the Victoria City hall as we trotted across Bastion Square. We were following an experienced guide, who knew and loved his historic city. Looking back, we could have taken four times longer to see, process, photograph (the falling in love part happened quickly) the dozens of neighbourhoods Dave Mason led us through. My photos - captures rather than studies, which I typically aim for, lack the detail and compositional quality I would like.

That being said, just look at the Board of Trade Building, a towering 4 storeys (well it was the 1890s) of red brick, rusticated sandstone, and terra cotta panels.


Does this convey the "historic prominence and power of the Victoria Board of Trade, which had administered local and provincial economic and commercial activities since its beginning as the Victoria Chamber of Commerce in 1863" Yes? I think so. (Quote from HistoricPlaces.ca. Link is above)

A bit of Romanesque swagger, some Chicago School verticality. A statement. 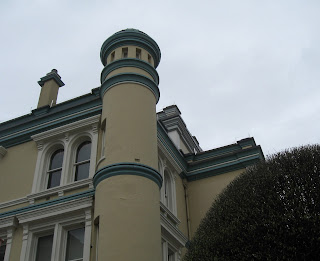 Then there is the Provincial Courthouse at the upper end of Bastion Square. Here's another great quote from Historic Places.ca, to whom I resort when my brain becomes waterlogged after several days of rain and low pressure. Of the 1889/01 Provincial Courthouse, they say: "this castle-like structure remains as an historic embodiment of law, order, stability and justice which have been practiced [sic] at this site since the 1860s." 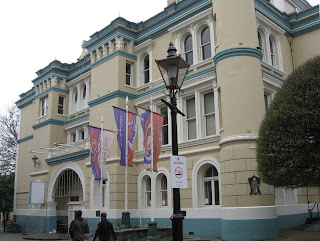 It's quite extraordinary, really. Rapunzel towers, arched windows, Italianate detailing you'd expect to see in Venice, all on the still pretty rough and tumble west coast.

It's of brick, yes, but covered with stucco imitating stone, the better to intimidate the law-breakers.

And finally, my personal favourite, the Temple Building, yet another brick Victorian, also recorded by the folks at HistoricPlaces.ca. They deem it "one of Victoria's most architecturally significant buildings" with its rusticated sandstone main floor, arched entry with lots of pressed brick and/or terra cotta ornament (too bad about the doors.) Architect Samuel Maclure, who figures in many chapters of the city's architecture story, designed the commercial building.

The HistoricPlaces description revels in the surface decoration,  inspired by American architects Louis Sullivan and H.H.Richardson. Do follow the link. They do it justice.

The Temple Building was one of our guide Dave Mason's favourites as well. He pulled this photo of Malatesta Temple in Rimini, Italy (Wiki link, thanks Dave) from his knapsack, to illustrate the classical source of Maclure's inspiration. 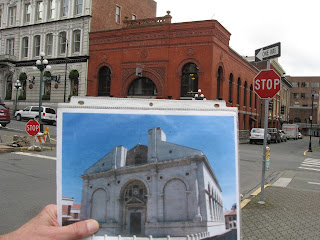 Magnificent Victorian buildings. These bricks are a long way from the beach.
Posted by Ancestral Roofs at 4:52 PM