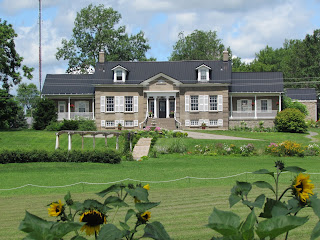 I am fascinated by this residence near Maitland. It looks perfectly at home in its exquisite gardens, but somehow it speaks of England, not an early settlement along the St. Lawrence River.  I remembered that I'd fallen under its spell a summer ago, so decided to look for my photos, and do a bit of research.

Then last night, as I was savouring a chapter in my re-reading of the delightful volume The Ancestral Roof, I made a discovery. (Yes, the  title was the inspiration for this blog's name, homage to this very early book about early Ontario architecture, published in 1963. Not a text-book, more drawing room chat with the most erudite Marion Macrae.) 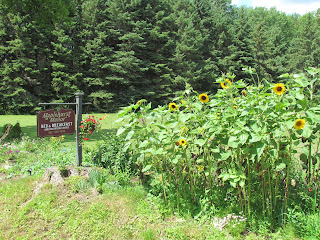 I found Macrae's reference to this house.  I was delighted as I hadn't read enough house history to satisfy me at the website of Maplehurst Manor  - for the sophisticated house has been pressed into service as an elegant hostelry and event venue. Inn-keeper Ann Cox relates that the home was created by a British architect in 1829 for George Longley, an Englishman who once served as member of the assembly for Grenville. The house is described as Regency/Neoclassic. 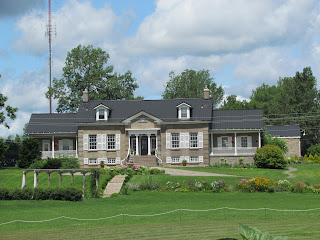 Back to England.One of the topics I unearthed in my studies over the past few years was the Palladian Style. I had a go at this academic European style a couple of times, and remembered enough to think "this house is Palladian in inspiration."

Elements characteristic of the style (which I won't go on about here, since you have already followed the links to my earlier peregrinations) include the form, with flanking wings, a projecting centre section with pediment, raised basement level, and absolute symmetry. It also seems to me that the external steps to the main entrance on the second level, and the columns (Ionic capitals) are typical. Is ashlar stone characteristic? I would think so. 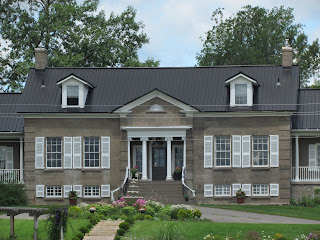 And I muse: half-moon in tympanum of pediment, cornice under eaves, quoins.Georgian door with half-round fanlight, separate full side-lights. Absence of the typical rusticated masonry on the first (basement) level, and of a third full storey (dormers suggest some space up there) mark it less than academic.

Ah yes. A look at Macrae puts Maplehurst solidly in the ranks of the 'vernacular.' Does she say that with a slight sniff? She doesn't mince words.  "Maplehurst presents a somewhat contradictory of merits and absurdities." Ah, she does like the masonry work. The entry (which I thought rather grand, what do I know?) not so much. She lectures the master-craftsmen involved for "the sheer ineptitude of composition present in the recessed porch...It may not always have worn its heavy architrave like a cold compress [ouch!] for a decorative cornice may once have relieved the bad proportion, but the capitals of the columns can never have been any closer to the Ionic than they are now." She notes that the humbling external shutters must have been added later, by those who didn't know better. 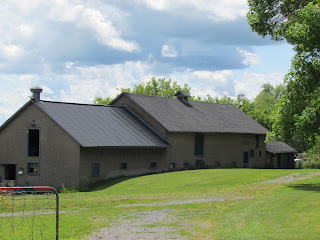 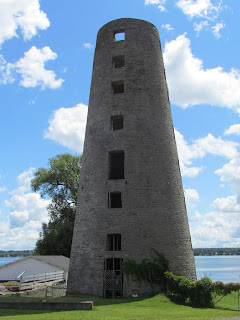 As I compare my photos to those in Macrae's book, I think that some improving has taken place. Would love to hear her opinion on what looks like a rather elegant full entablature with wide cornice replacing what appears in the photo in her book - something akin to a plain stone lintel sitting atop the columns. Can it be? Did someone fix this, and not tell us?


As we leave, we turn our attention to the bank of the great river, where stands this skeletal windmill. The inn website states that this was the site of Mr. Longley's wind-powered (later steam-powered) mill. I wonder if the fine stone barns adjacent are part of the complex?

This Waymarking.com page contains some biographical information about George Longley. Ah, Maplehurst clearly has more stories to tell us.
Posted by Ancestral Roofs at 6:05 PM