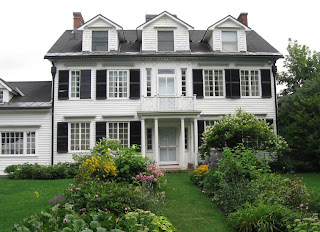 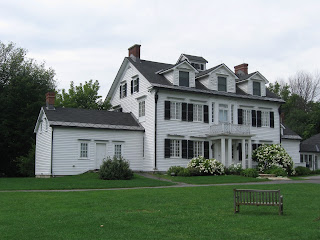 I just revisited Ottawa's 1828/9 New England-evoking Billings Estate via some photos taken last summer. I am especially taken with its matching front and rear elevations. Although the house museum wasn't open when we visited, a peek revealed the centre hall, opening at both ends, which would have provided relief from heat and humidity in Rideau River summers. Its builder, Brandish Billings, UE, first settler in Gloucester township, began with nothing but the early nation-builder's dream, and with wife Lamira Dow built up a farm of 800 acres. This house, the oldest frame house in Ottawa, was his third house. 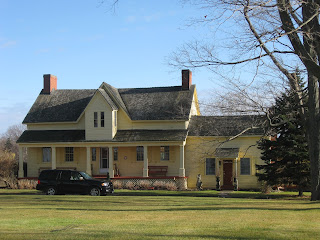 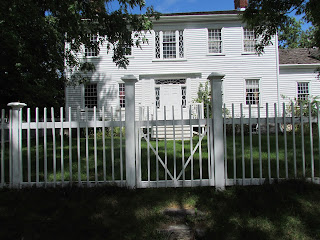 Off to Prince Edward County. I recall that the c1811 Captain Robert Young house in Carrying Place is distinguished by matching front and rear facades (although I have never seen the back of the refined frame house, Peter Stokes records that it "shares [with the Daniel Reynolds house of Wellington] a basic principle of early buildings: the front facade is a mirror image of the back wall, right down to the doorcase detail and regular arrangements of windows." Of course early house fans will recognize the later add-ons, the peaked front gable, verandah and peculiar sunporch. It sits along the historic 'Carrying Place' in company with several other very early Loyalist houses.


Another beautiful example of the matching facade is the exquisite 1825 neo-Classical McPherson House in Napanee (recently rescued by the County, inspiring confidence in its continued viability.) Its  beautiful street face with flat-arched Venetian windows is mirror-imaged on the rear facade facing the river -  once the main transportation route -  providing an impressive welcome for any important guest (Sir John A was an in-law) who might alight.

Robert Mikel (Ontario House Styles, 2004) notes the rectangular transom emulating the desired elliptical fanlight, muntin bars installed in delicate angles to create the illusion. The curvilinear pattern in the half sidelights is created by the thinnest of metal cames.

And what a door: "gently fluted pilasters, rare double doors...plain pilasters supporting a narrow cornice. "Great to see it so well maintained. White becomes it. 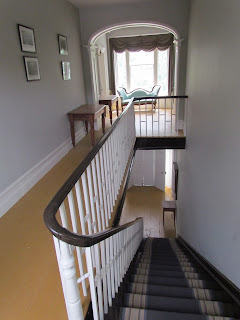 Alan McPherson was wealthy; he owned a store, distillery, mills and a lumber operation. His wife was known as 'angel Mary' for her kindness and philanthropy. This view down to the front entrance conjures for me scenes of joyful welcomes for visiting friends and family.

There is a ballroom upstairs, with displays that bring the social life of this early Napanee home into bright focus. 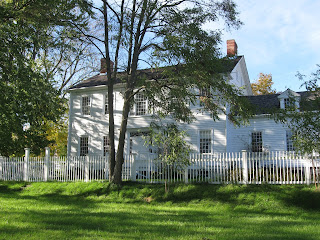 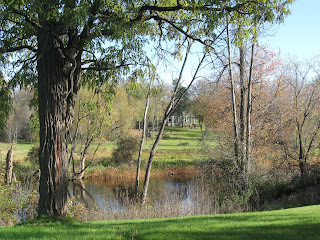 This is another look at the rear of McPherson House, dappled with shadows cast by the magnificent black locust trees on the lawn.  If you had a view like this "out back" would you not dignify the house similarly? 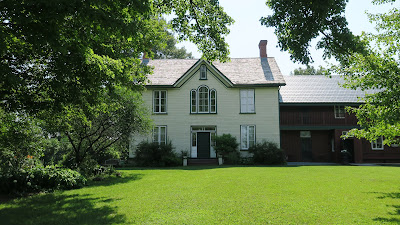 I visited this Smiths Falls area home this summer. It's the Smiths Falls museum and although the house wasn't open, the property was, and I had a lovely explore of the veggie and flower gardens and the lawns meandering through clumps of woods to the edge of the Rideau Canal and the historic Old Slys lockstation. 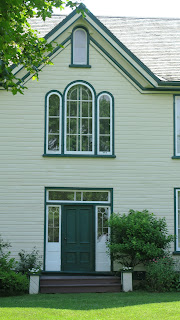 This mirror facade home is the 1862 Joshua Bates dwelling. Bates was a grist and carding mill owner and situated his home on his mill property, near the important transportation route, and in anticipation of the railway to come (and come it did but not in time for Bates. As I wandered in July 2017, a 150-wrapped VIA train hurtled by on an embankment just over the fence from the vegetables and resident rabbit.) Sadly Bates died, in debt, and his family had to sell the property, only two years after completion.

The house appears to me old-style for the time in which it was built; a formal two and a half storey frame Georgian with a one and a half-storey board and batten wing. I love the staunchly symmetrical facade, a Gothic gable with round arched window, and on the second storey, a round-headed Palladian window adding a modern touch, rather overwhelming the plain door with half sidelights and rectangular transom. Uncommon casement windows. An austere study in white clapboard and red ochre. And a lovely spot to spend a summer afternoon. 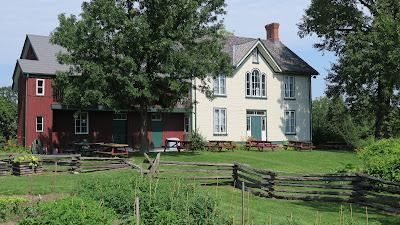 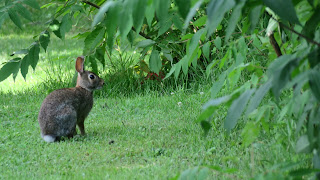 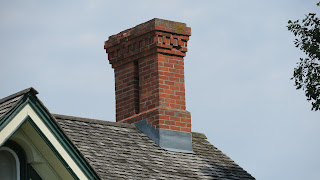 An early house without a chimney is bereft. Please take care of this beautiful twin-flue with its ornamental brick cap.
Posted by Ancestral Roofs at 6:41 PM