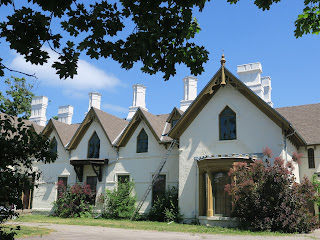 Can't quite understand it. Checked and rechecked my list of posts, draft and published. And nowhere was there an account of our visit to Auchmar this past June on a mini-holiday to Hamilton. So much for the day's enthusiasm; I think it must have been promptly over-run by the summer's first camping trip. 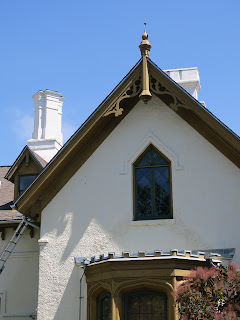 I've followed its genteel decline over years, buoyed up by occasional accounts of the work of Friends of Auchmar who are dedicated to its preservation and an ongoing role in the community. I will not insult them by a brief account of their Herculean efforts - check their site.

But Auchmar is on four acres (some sources say 9) of some pretty toothsome property on Fennel Avenue West (here's a Streetview peek) not too far from the edge of the escarpment. A scan of the neighbourhood shows 1940s housing succumbing to development - condo towers, college and hospital campuses. Developers must be salivating, while this rather substantial property stands unassailed behind stone walls, in its picturesque Gothic glory among ancient trees and wide lawns, testament to the way things were in 1855. 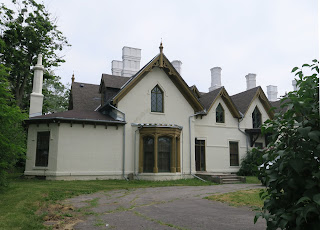 Pre-Confederation, with excellent provenance. Would England be having an issue with its upkeep?

It's complicated. Auchmar is owned by the city of Hamilton which has put thousands into restoration of important elements of the house. Re-roofing, stucco repair and painting, and repair/reproduction of wooden trim, the windows (those bay windows are gorgeous) are just a few of the long list you can check out here. A chunk of Hamilton's Canada 150 grant has gone into repairing/rebuilding the stone wall around the property (photos below.)

An impressive "Friends" group, and the battalion (13th Battalion Auchmar Trust) founded by Auchmar's original owner, Isaac Buchanan, are working desperately hard on the estate's behalf. Isn't there a song that goes something like 'we've gone too far to go back now'?

(As an aside, I am so grateful for Belleville's Glanmore National Historic Site. The house is owned by the City of Belleville, and is well staffed and funded, a strategic planning process underway to ensure its continued success, and future as a vital part of the area's tourism and cultural assets. Nice work, Belleville!)


Enough asides already. Back to our visit last June. We had spent the previous night at the delightful RoseArden b&b on Mountain Park Avenue, peeking over the edge down onto the city. Not far away along the edge of the escarpment was Claremont Lodge, gatehouse of the original 35 acre estate. Here's a Streetview peek as we didn't learn of the place until later.

But of course the property would have reached to the 'edge' - no self-respecting picturesque estate could do any less! 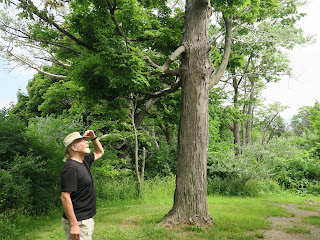 Before we left town the next morning, we set out to find what was left of the Auchmar estate; I was determined to get a photo, expecting I'd have to thrust a lens through a chain link fence, to get even a glimpse. To my shock and delight, the gates were open, workmen and cameras were about, to keep us from vandalizing the place, and we were free to wander. So much to absorb: the natural setting, the house with its exquisite Gothic Revival detailing, the extent of the restoration completed, the work still to do. Millions more needed to make it useful, with all mod cons.

The entrance gates led us through what remains of the original buttressed stone wall surrounding the property which started out as the 190 acres of Claremont (or is it 35? Sources vary.) A large limestone carriage house and even a Gothic dovecote led us further into the grounds.

And then there is that house! Auchmar is the 1855 home of wealthy Scottish born merchant Isaac Buchanan, political and civic leader, Presbyterian philanthropist,  abolitionist, railway promoter, military man and general mover/shaker. A nation-builder back in the days of new nation-builders.

Here's Auchmar's pedigree on the site Canada's Historic Places. It deserves no less. (occasional quotes are from this source.)

Auchmar certainly looks like the estate of a Scottish laird, with its brick manor house clad in rough-cast stucco, clustered chimneys and Gothic details proliferating. Originally,  verandahs lined the front of the house, adding to the picturesque aesthetic. They are missed.

How I would love to see the interior - 24 foot central hall with staircases at each end of the house. Here's a link to a fabulous entry on a blog I follow, with photos. A Gothic Revival treasure!

Auchmar has several pasts. As we continued undeterred around to the back of the house, we were able to inspect evidence of its recent past, which, admittedly adds little to the picturesque quality of the 1855 home.

A flat-roofed brick dormitory and rather attractive though unsympathetic mid-century modern chapel were added by the Hungarian Sisters of Social Service during their residency from 1946-71. Auchmar was renamed Mount Cenacle at that time, and operated as a retreat house.

The house and estate had passed out of Buchanan family hands in 1926 - the Young family occupied Auchmar until 1943 when they rented it out as a WWII convalescent hospital; the house changed greatly under medical exigencies, and the Young family did not return afterwards. The nuns purchased Auchmar in 1945.

For more of the estate's story,  visit the history pages of the outstanding Friends of Auchmar website.

Or if you prefer, just wander along with us. 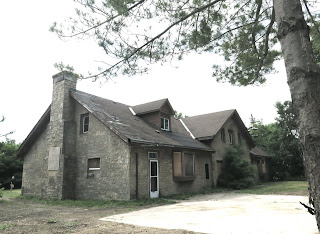 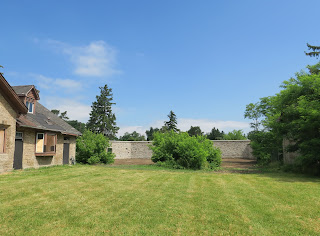 And plan to join us next time we get to Hamilton, when we try to find another of the city's fine estates, Balfour (Chedoke) House. (This link takes you to Hamiltonian Adam Wilson's outstanding blog Fresh Brick, which I've mentioned here before.)
Posted by Ancestral Roofs at 12:49 PM