One wonders just how optimistic to be. The headline on the Facebook page of Community Heritage Ontario reads: "The Auditor General has responded to the need for more funding on Canada's Heritage Places. Good news for heritage."

I checked out the Auditor General's report, hopeful as always that the wheels will spin into action in response to this challenge. But the wheels turn slowly, and they turn in many directions: there are always so many other Federal government priorities.

Here is the 'overall message' of the report:
"Overall we found that Parks Canada, Fisheries and Oceans Canada and National Defence did not do enough to conserve the physical condition and heritage value of federal heritage properties. The three audited organizations either did not know how many heritage buildings they had or did not know what condition the buildings were in.... because of the lack of funding for conservation work, more buildings may fall into disrepair. This means that present and future generations of Canadians could lose an important part of their country's history." Here's a link to the full report.

Now maybe that doesn't matter in the grand scheme of things. So many people no longer have a country, much less the safety and security in which to contemplate its history. Heritage preservation. A first world problem, you say?

Don't give up hope, Den reminds me. Think of Auchmar. From the first moment I learned of it, I had that uh-oh feeling. But the wheels continue to turn. In the right direction.

A recent post on the Facebook group Early Ontario Homes  kick-started a new story. A group member had shared a post from the Facebook page of the Vintage Cornwall Archives. The post contained a lament about the deplorable condition of Inverarden House (1816) and a series of photos taken recently. A second post with 1983 photos of the interior followed, and I was hooked. The post was labelled a 'conversation starter',  and indeed it was.

The interior photos were taken and posted by Montrealer Fréderic Serre, from a time when he worked at the house. Furnished. Public programs and interpretation! Sigh. Now I guess only trespassers can access the property, and I'm too big a wimp for that. I contacted Fréderic and he graciously granted me permission to use his photos in a post, as I had not yet made it to Inverarden. We had been nurturing a plan, motivated by Dan Buchanan's new book, to visit in the spring. Our plans were dashed when I learned that the property is closed, fenced off, and deteriorating.

On the Parks Canada website's Inverarden NHS page, we are treated to a lovely photo and encouraged to enjoy this view. We're to be reassured that Inverarden "remains a grand relic of Eastern Ontario architectural history." Although the house was restored in 1970 and served as a museum until 2000, Parks Canada now appears content to consign it to the "relic" bin. Here's a link.
But it's not enough. And it's not just me. Here's a lovely article called 'Why Do Old Places Matter? It's About Continuity', written by Tom Mayes of the U.S. National Trust. The thesis is that connectedness to history provides emotional and psychological benefits, providing people with a sense of "being part of "a continuum." Read on.

Read it and weep. 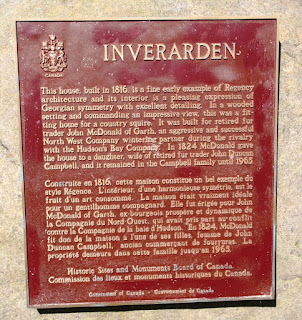 Don't give up hope, Denis says. So I continue to research. And I unearth a Management Plan, twenty-seven pages dated 2007, enthusiastically endorsed by John Baird, banging on about the property's commemorative integrity. It appears that the entire plan (and the funding required) is contingent on finding "a suitable tenant."

Let's have a look at Inverarden's most enduring presence - its Historic Sites and Monuments Board plaque:

"This house, built in 1816, is a fine early example of Regency architecture and its interior is a pleasing expression of Georgian symmetry with excellent detailing. In a wooded setting and commanding an impressive view, this was a fitting home for a country squire.

On occasion, I complain about not being able to step inside important heritage buildings. The irony at Inverarden is although the property is closed to the public, the interior is accessible thanks to Fréderic Serre, who agreed without hesitation to allow me to post his 1983 views of the house. 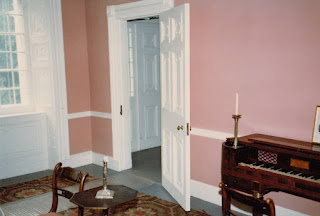 When I got to the photo of the stunning reception hall I did a double-take (no pun intended.) Because I have stood in this hall - well not this hall exactly, but the hall of friend and mentor Shannon Kyle's Regency rebuild in Prince Edward County.

You can check out the story and photos on the home's website - as the rescued Regency functions very successfully as a self-catering accommodation dubbed The Gryphon. Shannon takes you through the rescue story on her website Ontario Architecture. Scroll down about a third of the way through the Regency section.


I wrote about Shannon and her project to save and relocate the exquisite but doomed 1820s Regency cottage in 2012 in County and Quinte Living magazine. Unfortunately, their online archive of past issues doesn't extend that far back, so I can't direct you to Daniel Vaughan's gorgeous photos of the interior of The Grove, which was the name of the Regency cottage in its former life in Ancaster.

Instead, you'll have to make do with my amateur efforts.


The casement windows at Inverarden, indeed the floorplan of hall, and entrance to the salon to one's right, on entry mirror the experience of entering The Gyphon (née The Grove.) Uncanny, but not surprising I suppose.

I don't know how hard Parks Canada's people worked on the interior, but recall from previous projects how true their restorations have been over the years. I do know that Shannon, a passionate advocate of rebuilding wooden frame windows, made sure that the casement windows were painstakingly restored. For the next 100 years.

I hope that Inverarden's majestic casements, and the worthy house that surrounds them, endure that long.

Posted by Ancestral Roofs at 11:36 AM