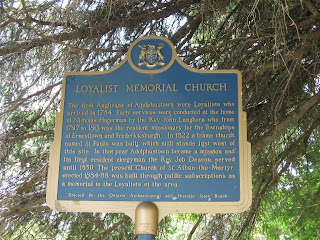 Five years ago (can that be?!) I wrote a couple of articles about the Loyalist history hotspot that is Adolphustown. Here's a  link to the Fall 2014 issue of County and Quinte Living magazine. (page 32, if you're really interested. I appreciate how the magazine archives online issues.) One of the locations we featured was St. Alban's Anglican Church. Thanks to parishioner Diane Berlet, I fell in love with this exquisite little church. Let me quote myself from the CQL article:

"St. Alban the Martyr UEL Memorial Church, a picturesque Gothic Revival Anglican church, sits on a hill above the road through Adolphustown. The church was designed by prominent Kingston architect Joseph Power at the request of Reverend R.S. Forneri  as a lasting memorial to the Adolphustown Loyalists; the cornerstone was laid on June 17, 1884. With its round tower topped with open stone-work and a conical roof, irregular massing, and steep roof the building resembles the medieval churches which inspired the Gothic Revival style. The interior of the church - massive open timber work, stained glass windows and the decorative tiles above the wainscoting - conveys a truly ancient feeling, uncommon this side of the Atlantic. 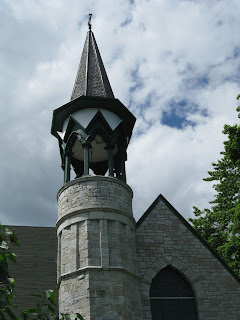 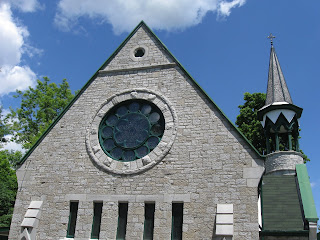 I've also posted about the church and its treasures, in this post and again here.

One of the most important features of the church is the Loyalist tiles. Again I repeat myself:

"The interest in medieval architecture and craftsmanship (turning away from church design emulating non-Christian Greek and Roman models) marked the Victorian taste in church design. This interest ensured that the almost forgotten art of encaustic (inlaid) tiles was revived and modern assembly processes developed by Herbert Minton of Stoke-on-Trent. 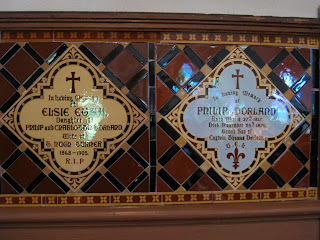 From 1890-1909, under Canon Forneri's direction, 64 encaustic memorial tiles dedicated to United Empire Loyalists or descendants were purchased by subscribers and installed around the interior of the church. For decades, parishioners took the tiles somewhat for granted but as so often happens, a relative newcomer led the small but mighty congregation to see the treasure in the memorial tile frieze, and the need for restoration." 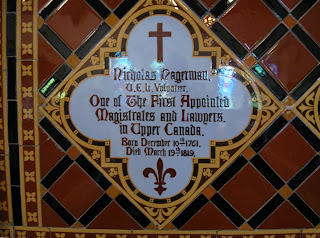 This 'newcomer' became the champion of the tiles. Parishioner Diane Berlet conducted research on the tiles, and produced a fine book in 2011.

It was she whom I contacted late last summer, once I'd spotted an 'open for tours' only sign at the church. Sadly, she confirmed that the tiny congregation had agreed to close the church. What a heartbreaking decision. The fate of the church and rectory were now up to the Bishop. No-one expected the church to maintain an empty building for long.

Now some parishioners and friends are working to preserve St. Alban's, and its Loyalist history, exploring possible new uses for the space. It's true that churches frequently become private homes, and the occasional one does very well thank you as a museum, or a community venue. The Trenton area Old Church Theatre has become an art and performance venue that draws people from the whole Bay of Quinte Area. But St. Alban's possesses a rich treasure in the historic tiles. 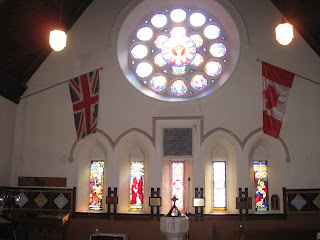 It's going to be a challenge. But heritage types are about nothing but challenge. And the unique collection of Minton tiles, emblazoned with precious United Empire Loyalist history, make this re-use project especially worthy. While Diane was conducting research for her book on the tiles she learned that the St. Alban's tiles were indeed Minton encaustic tiles, extremely rare in North America.'No other North American installation of inlaid Minton memorial wall tiles such as the St. Alban frieze is known to exist'. (again, I quote myself.) 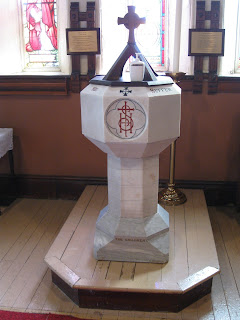 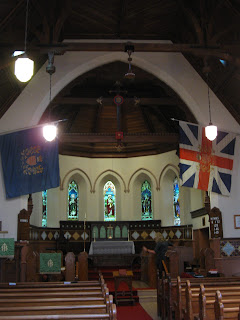 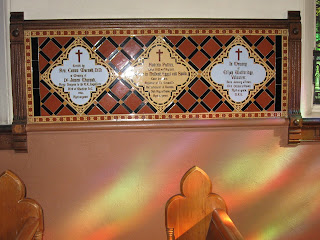 The People on the Walls is the title of a chapter in Diane Berlet's book. The tiles around the church memorialize 64 of Upper Canada's Loyalist founders and their descendants.

Individuals so remembered ranged from members of government to "justices of the peace, judges, sheriffs, physicians and military leaders from both the Revolutionary War and the War of 1812...to ministers of diverse faiths" to those recalled only by name, and birth/death dates. (page 20) 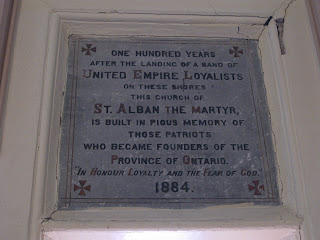 There is historical treasure here - and art treasure.

"The St. Albans tiles are in fact reminiscent of portions of the 13th century floor tiles which can be viewed in the Chapter House of Westminster Abbey today. (page 14, The Loyalist Tiles of St. Albans, Diane Berlet, writer/researcher, Graem Coles, photographer.)

And those saints I mentioned in the title? They are the newly minted Friends of St. Albans. Click on this link for a document describing their goals for this amazing church. And get involved.

Posted by Ancestral Roofs at 5:24 PM