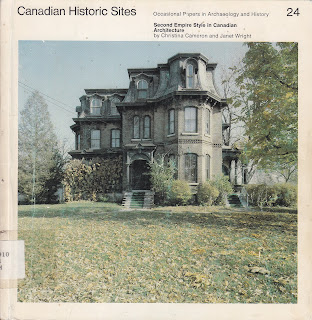 It's time. Haven't been to Ancestral Roofs in ages. Christmas plague. A couple of months busy over Spring and Summer deadlines, in preparation for a late spring junket 'over home.'  Thought I'd take a minute to celebrate those most pretentious of Victorian homes, the Second Empire variety. This in honour of a borrowed book, inscribed "Presented to Glanmore House (sic) National Historic Site on the occasion of their twentieth anniversary 13 June 1993 from Bellevue House National Historic Site." Aw, nice. Museum buddies. 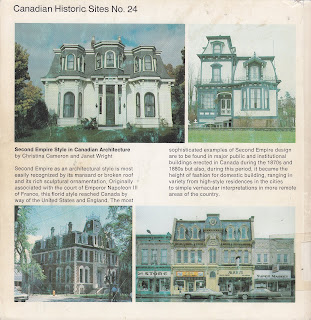 Second Empire excess has been on my mind lately. Glanmore, my 'other' house, was featured in the Winter issue of  County and Quinte Living. The splendid photos of magazine photo editor Daniel Vaughan showed the world how Glanmore does Christmas. I had a little something to do with it, also, she added modestly. In any event, the article (and editor Catherine's pointed remarks) brought a lot of people who "had been meaning to come in for some time" into the museum for all the Christmas splendour.

The book is one of a series produced by Parks Canada back in the affluent 80s. The burst of scholarship and publication arose out of the ambitious Canadian Inventory* of Historic Building, a well that has been tapped for a host of authoritative books on Canadian Architecture, such as The Settler's Dream, a local favourite.
*If you follow the above link you'll see that Glanmore's photo appears. Cred, to be sure.

I've talked about this series before: I'm fortunate to have collected titles in Neoclassical, Palladian and Architecture of the Picturesque (which requires stepping out of traditional 'style' names, a la Robert Mikel et al). I have just entered into negotiations with Abebooks to purchase a "some water damage but completely readable" copy for myself. 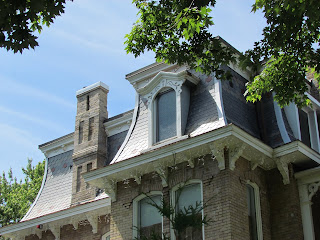 Because this copy must go back to the G'more reference libray. The title is Second Empire Style in Canadian Architecture.  The superscript Canadian Historic Sites identifies the series, I suppose, but it is missing in the other titles I own. Here's a review of the series; looks like the total was to include 7 titles. Wonder if they made it. I will check. "Hey kids, collect all 7!!!"

This book in the Parks Canada series is written by Janet Wright and colleague Christina Cameron. Cameron is listed as first author, but I recognize Wright's name from Architecture of the Picturesque on my bookshelf.

Parks Canada is a wide-reaching entity. I despair, and include this Wiki clip for your edification:

The Canadian Register of Historic Places is supported and managed by Parks Canada, in collaboration with provincial and territorial governments and other federal bodies. The agency is also the working arm of the national Historic Sites and Monuments Board, which recommends National Historic Sites, Events, and Persons. 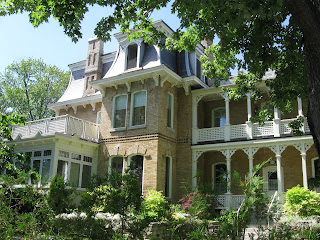 It's puzzling that there is no biographical information about the authors. Faceless government functionaries. They're more gracious. I LOVE that in their Acknowledgements they "express their thanks to the many persons who added pieces to the puzzle with patience and enthusiasm." Among those identified is my friend, and acknowledged local old house expert, Lois Foster. 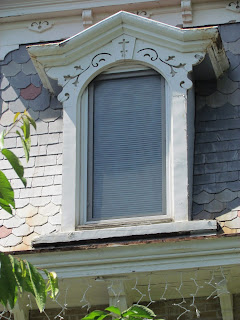 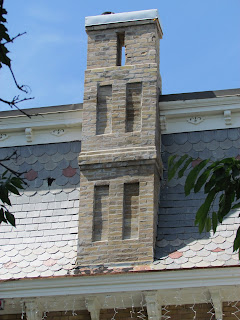 Another thing that appeals to me is that one of my very favourite (one, I hasten to add) Belleville SE houses, the buff brick at the corner of Charles and Bridge Streets, is the 'cover girl.' Had me puzzled for a minute, as the photo captures the Charles Street facade, whereas the  Bridge Street frontage is more familiar to OEH commuters. 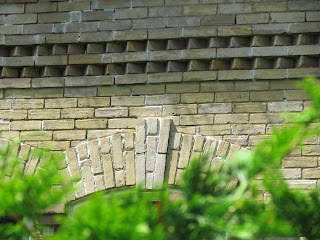 Here's a Streetview view of the side the Inventory types preferred. They missed out on the splendid chimney, included above for your enjoyment.

I won't go on about Second Empire style, or the toothsome examples I've come across in my rambles, because, well, I've already gone on about them. If you've discovered the recently added Search function on the blog, you can readily call them up. If not, here's a link to several posts. Gad, I do ramble on, don't I?
Posted by Ancestral Roofs at 11:56 AM