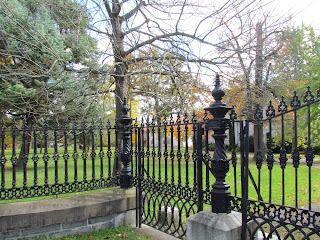 Nice fence, I've admired it for years, wondering, between quick checks for slowing traffic and park-bound jaywalkers, just what those impressive buildings behind it must be. But something about that fence and gate always said 'not for the likes of you' and I didn't question.

Not long ago, in company with friend Jane, I slipped through the surprisingly open gate, and explored the grounds of the grand stone house beyond, dubbed, without too much effort, Stone Gables. 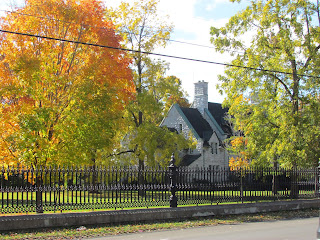 Before we leave off admiring the splendid gateposts and gates, of this fine expanse of cast iron and stone fencing along King Street, a word about the creator. The fence highlights the exclusiveness of the property at 462 King Street West, set back so far from the street, at Part Farm Lot 21, Concession 1. This is one of the large country estates that once lined King Street, the height of fashion in the late c19 and early c20.

Stone Gables is a large private residence built of stone in the 1920s, in the Tudor Revival Style.
It was home to Thomas McGinnis, a local construction engineer responsible for lots of projects at Queen's University - note the family resemblance? Have a look here, or other posts written about that time (remember, we're searchable.) 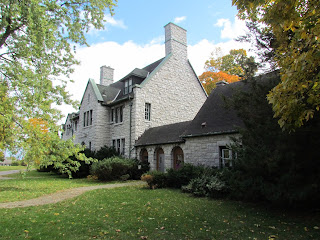 The colour in the fall trees, play of light and shadow, the feeling of separateness from the busy city street, the lake beyond -  they forgot to mention. 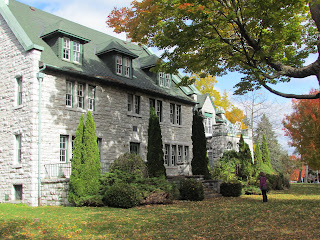 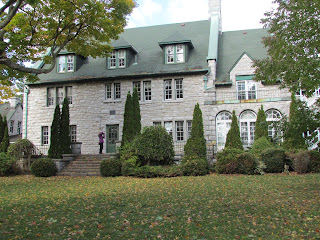 You can read more on the heritage sites about the associations with history - including the Federal Government's role in its use and preservation - though not maintance (especially evident at neighbouring St. Helen's) or adaptive reuse plans. Me, I'm just reliving a surprisingly warm late fall day in a lovely spot. 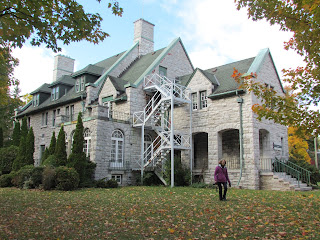 The south facade of Stone Gables (ignore the government issue fire escape if at all possible) shares the same position as St. Helen's, at the top of a rise overlooking the water. In Gables' case, infill housing has taken over the view, but the enormous trees on the site make it palatable. (I suspect that plan might work at St. Helen's, and wouldn't it be nice to channel some of the proceeds into restoration and maintenance?)

A colonnade and a second floor balcony atop a conservatory room suggest Gatsby-like summer revelry in this fine and private place. 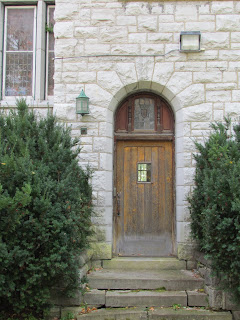 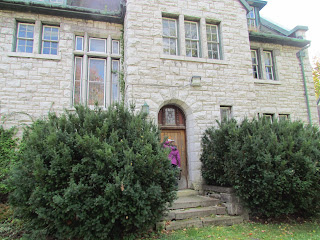 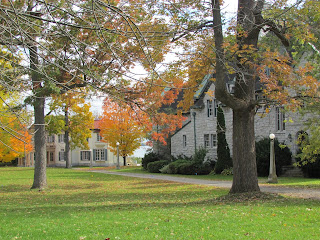 The doors had Jane frothing with curiosity (and I thought I was a snoop.) Tiny entrances - little in the way of baronial entrance halls could be gained from determined peering at either entry.

The round-arched doorway is characteristic of the style, but the southern door didn't make sense to either of us.

The various heritage reports I've encountered online speak about the visual connection between the two houses. This view across the "landscape Regency gardenesque grounds" says it better than any government bafflegab can. 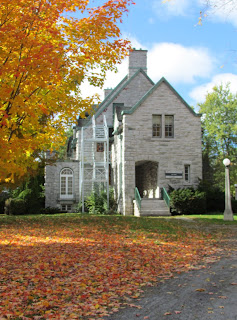 The somewhat blurry view of the east facade (they're far enough separated for me to run out of breath), taken from St. Helen's next door, highlights the connection between these two historic structures. Their loveliness makes the slowness/complexity of decision-making about their future frustrating.

Posted by Ancestral Roofs at 5:41 PM