So where did that year, and that promise, evaporate to? Over a year ago, I vowed to return to the places I love along the Rideau. Here's my promise to myself here.

This week I've been rereading Liz Lundell's fine article about Chaffey's Lock in the Fall issue of Acorn, the quarterly publication of ACO. The theme of the issue is Small Places Big Heritage.


Chaffey's Lock (along with other lock communities along the Rideau Canal) has been one of my favourite summer destinations for ages. Turns out Liz spent summers in the area as a kid, so it's even a bigger favourite of hers - and a place she knows much better.


I've tried for years to explain the attraction of these historic Rideau canal communities. Here's a previous effort. There's something unique about them - they're landscapes in miniature, rushing water of back channels balanced by serene domesticated canals, rock cuts long healed after the assault of canal building in the 1830s  (link to an 1833 Thomas Burrowes watercolour here shows the deforestation and rock moving - all by hand), softened by lawns and gardens. Old bridges, leafy streets and lanes, lots of hills and curves.

These places tell political, military and social history tales to anyone who would listen. The engineering of the canal infrastructure is fascinating, the fact one can ramble back and forth across historic them along the lock gates astonishing.
Liz has done a brilliant job of uncovering the hamlet's multilayered history. I was amazed to learn that the old mill that we love is actually the second iteration of the place. Back in 1820, English immigrant Samuel Chaffey had built a substantial milling complex with "saw, grist and fulling-mills,carding-machines, stores, barns, distillery, etc." Shortly after his death in 1827, work began on the Rideau Canal, and Colonel By appropriated the land from Chaffey's widow, eventually constructing the canal and lock system we see today (a less bucolic version, to be sure.) 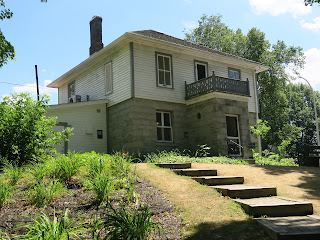 In the hamlet are early homes harkening back to the days when these dams and waterways worked for a living, structures whose use changed from hardy workingmen's houses to summer retreats.

A second  generation of guest houses and lodges arose out of the recreational steamer days, when the sport fishery became the attraction. The logging, mining and transportation days were gone. 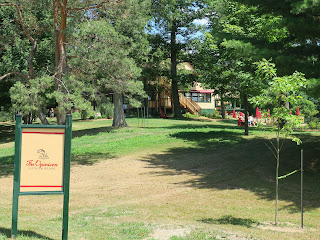 The famous Opinicon Lodge began in those days; the centre section of today's resort was built in the late 1800s. The Opinicon was once a private lodge for American fishers. It's been wonderfully refurbished in recent years, and now admits Canadians. 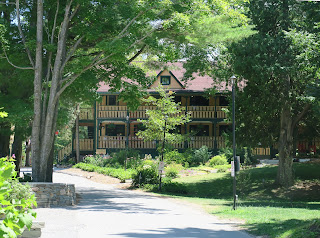 We've ventured as far as the Opinicon icecream shoppe, but now that there's a pub... 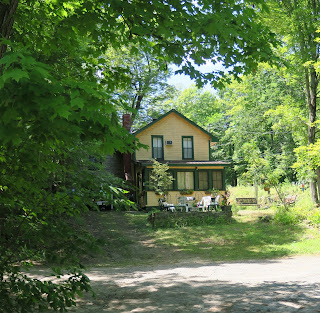 The gorgeous forest crosses the bridge and swoops on up a hill on Opinicon Road. At the corner, across from the lovely art gallery in the former mill, is this great house. I fell in love with the setting, the simple farmhouse construction and covered verandah - and the delightful colours! 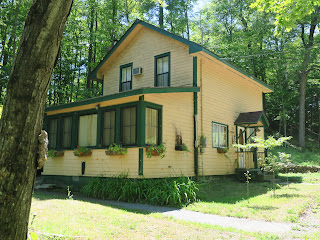 This is Fernbrae Cottage; historians assert it was a miller's residence in early days. Location makes sense, steps from work. Since the 1920's, it's served as a family cottage. When I see cottage, this is what I see (although a lake would be nice), not the monster second homes we seem to need in the new '20's. 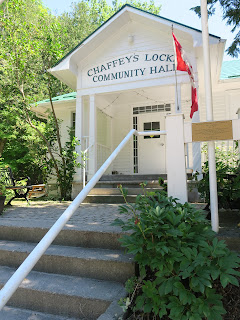 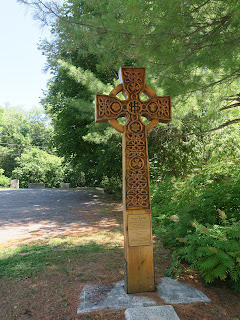 The Celtic cross remembers the approximately 1000 Irish labourers who died while building the canal. several other memorials exist; here's a link. Today we cannot imagine the hardships.

Another group of community builders, the Women's Institute, established the community hall in 1932. It's still maintained as a community venue. 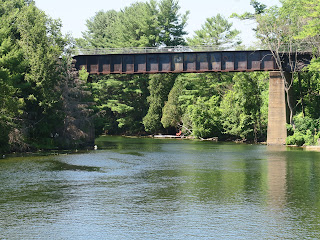 The iron bridge was built in 1912. Let these photos take you there. Now it's part of the 103 kilometer Cararaqui Trail from Smith's Falls to Strathcona, near Newboro. Bicycles welcome. Hmm. 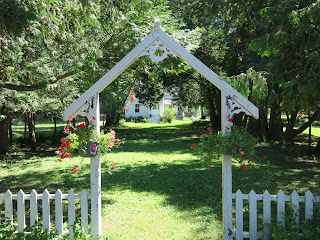 A stroll around the hamlet offers sights like this - old summer lodges and cottage resorts, some converted to private homes, others still offering visitors a bit of shady summer beside an historic waterway. Is this gate not inviting?

A shout-out to the Chaffey's Lock and Area Heritage Society who work to keep history's voice heard in this wonderful community.

There's no segue coming to me, so I'll just say this. The historic 1872-3 Chaffey's mill was built by John Chaffey, nephew of Samuel Chaffey of Somerset, England, who built the area's first mills around 1820. The story is wonderfully told in Liz Lundell's article. But what Liz did not mention (there being no right time to say it) was the Australian connection. When we were in Australia last year, I picked up references to the Chaffey brothers who'd developed irrigation systems in the Murray River area in the state of Victoria, and was astonished to hear they'd come from Brockville.

Turns out, Mildura was 'created' by the Chaffey brothers, whose expertise lay in irrigation systems enabling cultivation and, in the case of Mildura, the wealth of orcharding and fruit growing. Prior to their trip down under, they did the same in California, rendering fruitful several areas in California, one christened Ontario. (Years ago our cousin Hugh did a teaching exchange in Mildura; his wife picked grapes, related somehow.)

These irrigating brothers, William and George, were the sons of one George Chaffey. Liz Lundell writes that Samuel and his brother (turns out to be Benjamin)  "operated successful milling and commercial establishments for a few years in Brockville", before Samuel went up the Rideau.
In the day, folks had lots of kids, spreading out across the face of the yet unsettled country. I am convinced (where are those genealogists when we need them) that brothers William and George sprang from the same vine, just how I don't know. But it's a great connection somehow - water, always water with this family. The Australian cousins (nephews, whatever) did okay. Here's a link to  Mildura's Chaffey Trail- one of the stories features the grandly Queen Ann Rio Vista historic house (1891). Here's a visit. Although the red brick would be Ontario-familiar, the woodwork of Murray pine and red gum, and Western Jarrah and blackwood would have been underlined just how far they'd come from Brockville.
Posted by Ancestral Roofs at 4:20 PM