Back to Square One 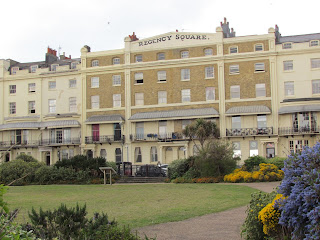 It's true. This blog and I spend an inordinate amount of time in Brighton, Ontario. I did try, back in December, to balance things out with a bit of time in the UK's Brighton, commenting on the ridiculously posh (former) horse stables at Brighton Pavilion. But things got away from me (there's a horse allusion somewhere, just can't harness it) and we charged on to Derbyshire, and Sydney, Australia.

So here's another wander through that other Brighton, from our visit last spring. Our AirBnB stay was a 40 minute walk from Brighton Pier, so each exploration further afield in the breezy damp was a bit of a forced march. But there was this Regency destination. 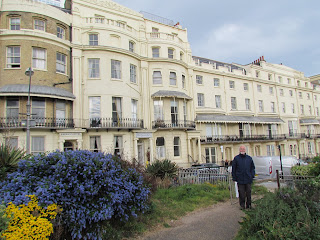 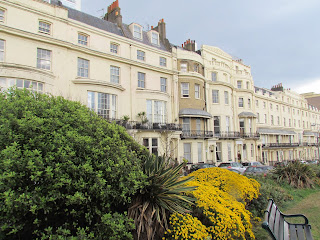 Appropriately, our longest march took us to the site of an army camp erected on a former grassy field during the time of George III. That military presence prompted a breathless response from flirtatious Lydia Bennett (Pride and Prejudice.) "Brighton comprises every possibility of earthly happiness"...with its streets "covered with officers" and "all the glory of the camp." (no, dear reader, I did not scour the pages of Austen, this was readily available on a history panel in the somewhat neglected gardens, removed and reinstated in recent years for the installation of an underground parking garage.) 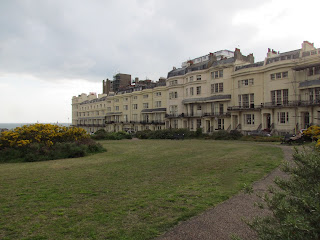 And it was not military history, or Jane Austen which brought us to this place, it was my dogged determination to see Regency Square, although the very name exudes Austen heroines and their tiny excitements.

Regency Square was a speculative residential development of 69 terraced houses built between 1818 and 1832, three sides open to the sea and the now-tragic West Pier on the fourth, a once-private fenced garden in the centre. The Square was prestige, the elite gathered. 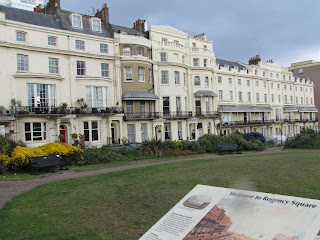 Here's an opportunity to cruise the square courtesy of Streetview. One thing you'll notice (and a thing that shocked me, as I had forgotten) is how the busy traffic, street and underground parking, and proliferation of tradesmen's vehicles detracted from the once-serene setting of 200 years ago.

So I think you might appreciate how difficult it was to get these photos! Thank you.

The Square is one of the best examples of Regency architecture in Brighton, according to one source. Who's to argue? Traditional town terrace-house style, most of the facade clad in cream-painted stucco, with a few bits of cream brick. 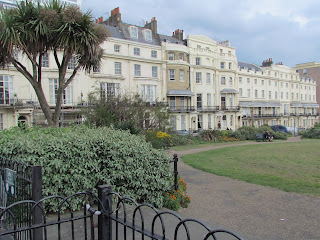 The architects were the father-son team of Amon and Amon Henry Wilds, who created much of the Regency character of Brighton.

The Regency Colonnade (passageway, in our language) leaks traffic out the northeast corner of the Square (a U, technically) , which the Regency Tavern has occupied since 1870. 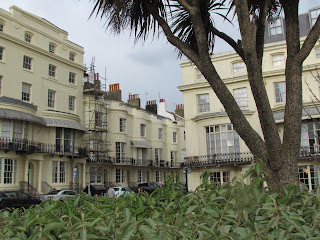 The neighbouring Russell Square was lovely too, but lacked a single sightline to encourage me to take away a photo. 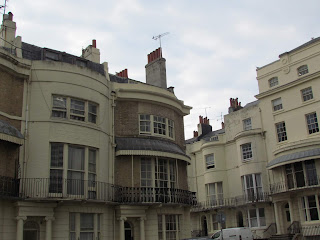 There's a book, and I must tell you I've been tempted. Anything to get me back here. This interviewer (I'm thinking he won the elocution prize at school, and never got over it) speaks with the author of the book. I think it's a charming interview that gives insights into the people who love this place.


This may have to do, in lieu of a return trip. Going through the site would take almost as long. It's the James Grey collection on the Regency Society website, and contains about 7500 photos of Brighton and area. Lots to see and do.

But the last word on the subject of Regency Square goes to Wikipedia. Not one of your "this is a stub" or "disambiguation required" sort of entries. I think I used up my entire annual donation to Jimmy Wales' project, just reading this account. It's clearly the work of a student of the Square, a detailed description of each and every section of the complex.

So if I've left any unanswered questions, click there. Or be square.
Posted by Ancestral Roofs at 3:22 PM