Brighton UK holiday, March 2019. Needs must, and the trudge to the pier happened. I've always been fascinated by the Victorian pleasure piers - nothing in my childhood remotely like them. Blackpool and others occasionally slunk into adult conversation, like slightly sinister characters in British novels. Later, Skegness Pier in Lincolnshire peopled reminiscences from my dear one's British childhood.

Pleasure piers boomed during Victoria's reign, as people's horizons widened due to increasing prosperity and mobility. I talked about the new leisure phenomenon in this Australia-based post - though our horizons aren't quite so wide this time.

According to this 5-Minute History site, wonderful for the vintage photographs, painful for the appalling advertising, the pier idea started small. Over time, with the promise of shillings to be made, the sea-reaching structures, originally landing stages for tour boats, grew into "complex entertainment venues with ornate pavilions, delicate ironwork and exotic lighting." 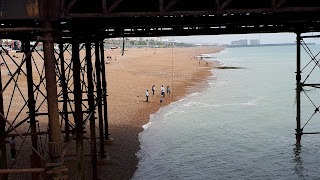 Looking at these images, I am astonished at the lengths the builders went to - and at the tenacity of the structures constructed far out into the ocean, as if daring the sea to do its worst. And sometimes it did. In 1896 a raging storm destroyed the work in progress, almost ending the pier before it began.

By 1850 there were a dozen piers throughout the country, the age's great thing, cast iron, providing reliable footings, although the wood frame confections built atop them were less viable, many succumbing to fire. By 1900, over 80 pleasure piers lured the masses to the seaside. Some retained their jetty jauntiness, others were outfitted with theatres, bars and restaurants, domed pavilions splendidly adorned. 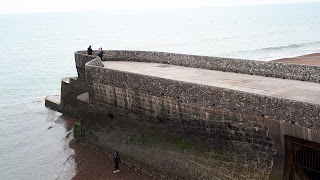 Only in England does this look like a beach day. Or a beach, for that matter. But on the April day we visited, people were enjoying the seaside. Den was intrigued by the breakwater's construction so we clambered down to sea level.

And that's when hagstones entered the conversation. Our family collects 'lucky rocks'. Might you know about them? Our mother started the tradition of looking for these smooth beach rocks pierced by tiny holes, Lake Ontario's limestone shingle being an especially good hunting ground.  In some circles, they're called hagstones, with Druidic connections. I have maybe a dozen 'lucky rocks' in bowls and baskets, any container that will hold luck. Included is a bright orange lucky stone Den found on Brighton Beach. 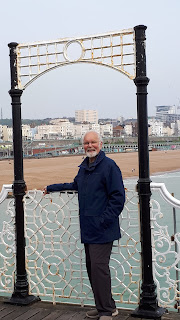 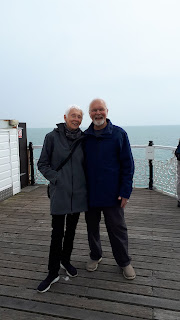 Back to pier history. The world's oldest pleasure pier opened in 1814, in the town of Ryde, Isle of Wight. Although we managed to cram an exhausting number of IOW destinations into our few days, we did not stroll that particular pier.

But here's quick overview - although the length is astonishing, and its age impressive, there's not much magic here, IMHO. 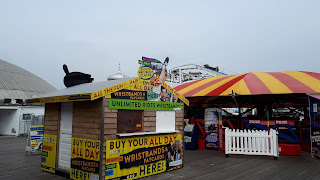 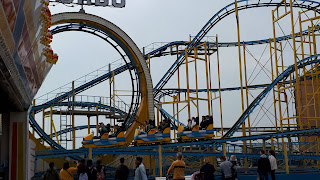 Now these photos don't contain any magic, either, taken as they were on a chilly March day. Then again, they wouldn't have any appeal to me in the pale sunshine of a July English day.

Brighton Palace Pier is the darling of day-trippers still today, though shorn of any trappings of high culture it might once have had,  its theatre and reading rooms demolished, an amusement dome replacing them. 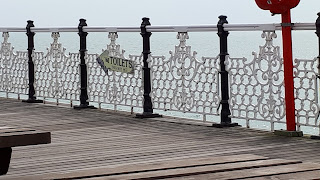 "Our war-bride aunt" as we are prone to calling her, recently recalled going dancing at Brighton Pier with our uncle, from her home/his army training camp in Surrey.

Not a dancing day. For me, the appeal lay in searching out vestiges of the historic pier, anachronistic bits of cast iron, timeless planking, the endless sea. This Arthur Lloyd gallery of ephemera and post cards helps. 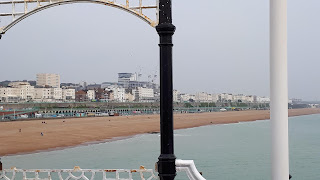 The pier's own website manages to include a bit of history along with exciting news about rides and attractions ("wristbands here, save 25%,") food and drink, and an Instagram gallery.

Incidentally, even the academics are having a look at the pier phenom, though whether this project survived past 2016 is something I haven't pursued, in favour of travelling further back in time. 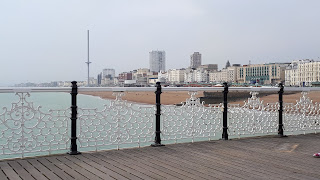 Brighton Palace Pier is the third pier built in the city. The Royal Suspension Chain Pier preceded it, built in 1823 and destroyed by a storm in 1896. It looked like an Egyptian inspired suspension bridge reaching out into the sea, from what I can tell from this Brighton History Museum site. The Brighton Palace Pier was its replacement (things got messy, but we won't go into that here.)

I am strangely moved by the story of the West Pier, visible as a tiny skeleton on the horizon at the left of this photo. It was  opened in 1866, just offshore from Regency Square (in fact residents of the square objected to its construction, destined as it was to bring the daytrippers and who knows what sort of people to their shores. Down-market, darling.)

The West Pier and the extinct Chain Pier were contemporaries. A concert hall was added on the West Pier in 1916; an astonishing 2 million visitors enjoyed the pier between 1918 and 1919.

Things have gone badly for the West Pier. In the first decade of 2000, major sections collapsed, two fires 'happened', and "structured demolition", whatever that is, took place in 2010, according to Wikipedia. The skeletal dome visible in this Streetview, er, view was what we saw last spring. (Incidentally, if you turn 180 degrees from that capture, you get a fine view of the Regency Square.)

And were you to visit Brighton today, you could take a 'flight' on British Airways i360, a revolving viewing tower offering splendid views, and champagne; check out this promotional video. Ironically, the tower didn't figure in any of our holiday photos, how can something so tall fall below one's radar? Not our kind of thing. Sadly, at the very end of the endlessly repeating loop, you can see the rusting frame of West Pier, once upon a time, the next big thing.
Posted by Ancestral Roofs at 2:53 PM