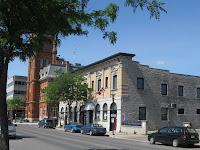 I love archival photographs - they are a tiny window into our history,
their haziness emphasizing just how far away we are, in time and in experiences, from those days.
At a Community Archives event on Friday, I took a photo of one of the wall displays which showed an image of a big event in early Belleville. I love how they used evergreens to create decorative arches over the street in the day.
I should have gotten the date, but after a quick check in the invaluable resource Belleville's Heritage (HCHS 1978) I think I can narrow it down to between 1872 and 1881. Could well have been the celebration of Belleville's becoming a city in 1878 (the centennial of which the publication of the book celebrated). 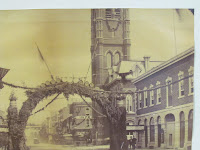 I can state those dates with some confidence, as the building I'm looking at, the Corby-Bone Building, was built (according to my impeccable source) for Henry Corby's offices between 1868 and 1872, and changed after 1881 when his son took over the building, adding the decorative carved window surrounds and cornice details.
I have often photographed this.building, loving the contrast between the somewhat pretentious front, and the rubble stone walls of the sides of the building, and wondering what its story was.
The archival photo shows an earlier version of the building. The lower storey is much the same now as it was then. The booklet describes its "lower storey of dressed stone in the English Italianate style, with classical round arched windows and doorways separated by rusticated stone piers". The photo shows the carriageway in the centre, although even then it looks to have been closed in by a door. But this early photo shows a simple brick second storey, with simple Italianate window surrounds with flat curved stone lintels with plain keystones, and a central glassed doorway, I think (bricked up in the later incarnation, leaving a small window). Under the simple cornice is a row of brick dentil or small brackets. 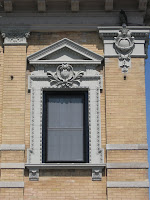 The photo above shows the style of decoration added to the second floor by the son, in an effort no doubt to go "upmarket". I wonder if this adornment was of cement? Certainly there was lots of 'off the rack' decoration produced in pressed metal and even cast iron (our own Hotel Quinte and Henderson building, respectively, are great examples). This just doesn't look like carved stone to me - and we have seen examples like this recently in Kingston, giving their humble origin away as they erode in the weather.
This has really got me thinking....I need to look more closely, but that will take another visit with a camera. This morning, I must resign myself to a few photos.
Drop me a line and tell me how wrong (or right) I am?
Posted by Ancestral Roofs at 9:17 AM