the case for quality 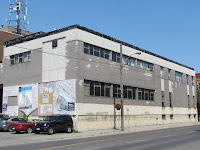 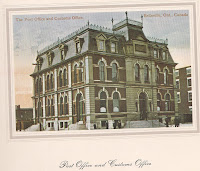 The corner of Bridge and Pinnacle Streets in Belleville is an historic spot - it's at the centre of downtown now, as it was in the early days of the last century. Despite the progress inflicted on heritage buildings in the 1960's and 70's this intersection is unique. Anchoring three of its four corners are really significant early buildings - the Belleville Armouries (1909), the Hotel Quinte (1895, rebuilt1909), the corner block containing the Post Office Block at 44 Bridge Street and the Belleville Club (1909), and the cultural landscape of the shady Armouries lawns.
And then there's the south-west corner. It was occupied until the 1970's by the Old Post Office (1890's), a pretty impressive French Second Empire structure. I don't know, I wasn't there, but I suppose it had deteriorated after nearly 100 years. However, with the quality of materials and the level of craftsmanship we know from many early buildings, my guess is that it was a far superior structure to the white brick box which replaced it. As no less an Intelligencer correspondent than Eugene Lang said - [the Old Post Office was] "solid as the rock of Gibraltar but had outlived its usefulness. " Today, with our growing awareness of the imperative of sustainability, there's a chance it would be renovated and reused, its Victorian finery making it a showplace in a mundane world of progressive replacements. Alas, the Old Post Office was demolished to make way for the Intelligencer Building, now itself a white elephant - an a very unlovely one it is too.
And to repeat the Joni Mitchell line, all too often used in connection with heritage "you don't know what you've got til it's gone".
Quote from Eugene Lang: Belleville Intelligencer, January 1990
Left: old post card view of the 1890 Post Office, Mika publication
Right: the Intelligencer building
Posted by Ancestral Roofs at 2:44 PM