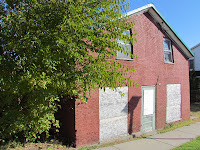 Just came across the fascinating story of this weary building in my old favourite 'Heritage Buildings East of the Moira' (Heritage Belleville, 1991). I will try to get back to make a photo that does it justice, although we are not as lovely as once we were. The fact that the structure is several feet below the level of the street now makes it a challenge to find just the right angle, and the car and train travel swirling around the old property make it risky to try.

That the house was built before the railway is indicated by the street level higher than its foundation, due to the grade requiring adjustment to cross the tracks, several feet above. 'Heritage East' (as I chummily refer to it, old friend it has become) states that the structure was built as a store and dwelling around 1845, in what was then "a pleasant location near the harbour and surrounded by substantial homes,"


The building is interesting for its wide stance, shallow roof pitch, and the large windows on either side of the plain door. A 1991 photo shows the wide 12 x 8 sash windows on either side of the door, "quite common in ordinary buildings of the time". The house has trademarks of Greek Revival styling - grand words indeed for such a humble spot - the gable end facing the street, and a low window on the south wall under the eaves which the book says "is absolutely typical of houses in Greek Revival taste in New York and Pennsylvania.

The owners and the structure are part of our history. According to the outstanding work of the historical researchers behind this book, the property was first owned by John Thompson; in his military service he saw action as a Captain during the War of 1812. The first nations resident in the area in 1804 gave him permission to build on the shore of the Moira. Later his son  purchased additional property in the area. Lawyer and local politician Edmund Murney bought this site from the son in 1841, and built this store and dwelling as a rental property.

The walls are bowing, the paint peeling. The windows are boarded up. Have we turned our back on this one, on another piece of our local history, and embarrassed, are we prepared to watch it die?
Posted by Ancestral Roofs at 11:19 AM