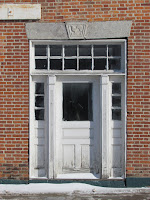 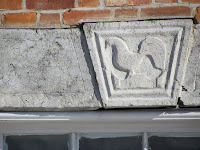 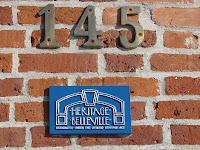 I am beginning a small research project about the War of 1812, investigating the connections to Hastings County and the city of Belleville (as it is now
called). Most accounts of the war centre on events to the east and west
of our city - very close, indeed (think Presqu'ile, Bath), but we were spared the loss of life and terrible damage to property experienced on the battlefields and in such places as Newark, violence that remains burned into the Canadian memory.

We were spared - or were we? Today I received research notes from one of our area's most esteemed historians. Over the next while, I will share these findings with folks who are anxious to know more about our Hastings Co. connections to the conflict.

But in the meantime - one of my small discoveries, made in my early explorations, was a story connected to this structure. This building is featured in my often-cited favourite Belleville resource 'Heritage Buildings East of the Moira River', Heritage Belleville 1991. This rubble-stone building with brick facade and parapet walls is the Liddle Tailor Shop, built about 1850. The first owner  (and probably builder) was Francis McAnnany, an important name in early local commerce and politics. The building is close to the old wharf district where much of the commerce of the city was once centred.

An intriguing detail is the rooster carved in the stone lintels over both wide doorways. The rooster, according to my source, is a sign once associated with customs houses. One of the owners of the property was Henry Baldwin, Collector of Customs from 1933 to 1836. Perhaps at one time, the building was slated for use as a custom house?

But wait, there's more (I heard that somewhere). 'Heritage East' goes on to make the War of 1812 connection. And I'll quote "In February of 1819, Joseph Dennis, a mariner, was granted Lot 16 in a patent from the Crown. Dennis owned a vessel on Lake Ontario upon the outbreak of the War of 1812. He fought in the war, was captured and held prisoner for 18 months. His service to the Crown may partly account for the Crown patent." I hope to find out more about sailor Dennis.

Posted by Ancestral Roofs at 5:43 PM