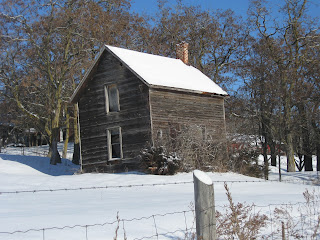 A few weeks ago on the way to Tweed, I fell in love with a fence.
It was beautiful enough - the fence line ...with mature winter trees casting exquisite shadows onto a snowy field of drumlins (and me without a camera what-was-I-thinking).


The rail fence sheltered by these aging trees, whose seedlings were once spared from the plough by this very structure, was rotting and broken. The responsibility for maintaining property lines and detaining foraging livestock for the century since the land was cleared had weighed heavily. Wind and water and snow, moss and time had brought it to its knees. The fence was returning to the earth.


My mother's voice returns. "The stories that house could tell" she would muse as we "went for a drive", our farmer father taking a Sunday break from his work to critique or admire the work of others.

Every man-made structure has similar stories.

I shared with Den the places that glimpse of fence had taken me, the voices on the wind. I conjured up the struggles of a farmer and sons cutting red cedar for rails and posts, the tired beasts hauling them to the new field, the physical labour and the art of building a sturdy fence.  I recalled dad's stories of being allowed with his brother to cut red cedars (vengeance is mine, said the man who hated those trees) during the depression for some spending money - "here's your allowance, son."

I channelled the thoughts of the tired farmers as they leaned against a top rail, humbly admiring their work - another small step in taming this wild land to their service. Next they'll turn their hands to improving the log shelter, to cobbling stones together for a better barn.


The field served well - for forage, for crops. Decades of stones released from the soil by winter frosts were tossed against the fence to create a small world for field mice and partridge. (My heart hurts when I see these 'fence lines' dynamited to create today's monster fields). I see hundreds and thousands of earnest, weary early farmers  building, planning, hoping - establishing the farms all over this province, the very farms now drowning under asphalt and the pretentious shabby houses of urban sprawl.


I told Denny all these stories and many more. "Am I nuts?", I asked, "to hear all these voices when I see an old fence?" Reassuringly, he admitted that fences don't take him 'there', but that it's a small gift to be allowed to hear those stories. "That's what historians do," he smiled. Oh. I have entered distinguished company.


Posted by Ancestral Roofs at 9:30 AM