Keep your hands off Lillian

I bopped along College Street, always ready for something new to catch my eye...and this goofy checkerboard pattern up at roof level did just that. Wasn't sure if I was looking an inspired upgrade (the Tudor arch garage door caught my eye) or something brand new...

...so I rounded the corner and discovered that it's a library, named after the formidable Lillian H. Smith, the first trained children's librarian in the British Empire. This branch houses a significant children's collection along with serious multimedia, and multi-ethnic collections and services, sitting as it does on the Kensington/Chinatown cusp.

The library was built in 1995 after 14 years in the conceiving, on the site of the former Boys' and Girls' House, an early children's library.

Thanks to the folks at Toronto Archives for the photos. Perhaps they'll forgive me if I attach a link to their virtual gallery exhibit "Playing by the Rules" at: http://www.toronto.ca/archives/rules/b_and_g.htm  /b_and_g.htm 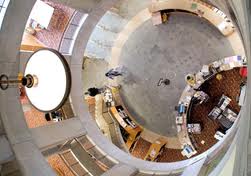 The building is designed like a medieval castle, with two towers, and a circular stairway that peers down through five open floors (boiling oil, anyone?)

Posted by Ancestral Roofs at 4:12 PM