"It is the brain, the little gray cells, on which one must rely."  Anyone who enjoys British murder mysteries with Hercule Poirot will recognize this Agatha Christie line, best when uttered by David Suchet as the ascerbic Belgian.

Saturday we had the immense pleasure of watching a master house detective share his discoveries at his property, Ham House (1816 - and there's a story there!) in Bath. The tour was thanks to the folks at Frontenac Heritage Foundation, and the sleuth was owner Ron Tasker.


I really hope Mr. Tasker is writing a book (I looked in vain for an online journal, or any print publication) about this restoration. Many folks had written the place off, until Ron Tasker and his wife Bonnie Crook took on the challenge. I wish he were writing a log of the process, so that I could double-check some of the facts I gleaned from the tour, and retrieve hundreds of others which have escaped.


Like these gems:
-dendocronology was used to determine the age of the oak sills - the tree from which one decayed sample was hewn started to grow in 1498!
-the age of hand-hewn recycled elements in the kitchen/shed was likely c.1808
-you can easily determine the age of wallpaper when you find a dated newspaper applied beneath
-graffiti existed in the early 1800's - the house features lines mocking a fussy drill sergeant, and the initials of the house's owner, Peter Hamm


-principal rooms can be determined by the quality of millwork (door and window frames) and floors
-why he knows the foundation was pre-1816   (pitted- ie. military- musket ball found in basement)
-what the little leather patch covered (a hole in the wall created by a musket-toting drinker)
-why the building is on the corner of the lot (it's the early urban way, also leaves room for infill development) 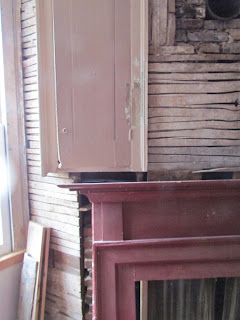 - what the footprints in the floorboards tell (where the innkeeper stood behind the bar)
-why the old (American) Georgian style decor in the store - it suggested solidity, traditional values, a store one can rely on
-how he knows there was a full entablature and pediment on the east/store entrance side (scars in wood trim)
-how he knows the beams were not  meant to be covered over in the taproom (beaded planks, smoothed beams)
-why the wide-board wainscoting was horizontal (early wainscoting was)
-the evolution of the interior space - eg. the east room was originally a store, then became a tap-room, which can be detected by scars from shelves, counters, walls, trapdoors and a staircase, relocated door and window openings


- why there is a rose inscribed on a beam - a blessing on the house. The Virgin Mary is represented by a rose
-what made the rose - a set of dividers found in the wall, rusted closed at the correct distance for inscribing the circles creating the 'rose'
-why we find shoes in the walls of early houses - 'concealed shoes' are an old English superstition, soliciting good luck on a house being built. Dried cats served the same function, but fortunately, none of those have turned up at Ham House


-observations on fixing a rubblestone foundation - (not easy, especially when a house sits on top). Ham house had been in imminent danger of collapse at the east end
-why there are still so many buildings from the first half of the c.19 along Bath's main street. The town stopped developing - 'frozen in amber' - in the 1850's when the Grand Trunk Railway bypassed it. This slowed later commercial development, which prevented the demolition of the early waterfront neighbourhood, which took place in more prosperous towns

And because I could have looked at these wallpapers all day, their patterns, their muted colours, wondering about  the process of creating them - handprinting? (I saw somewhere that the first wallpaper printing machine was only developed in England in 1839), I will leave you with these images. One thing I found interesting - in the store/tap-room, there wasn't lath and plaster; wallpaper was applied right to the wall planks.

Thanks to FHF's Dave Bull for his tireless industry behind the scenes. Not only does he send reminders of the foundation's wonderful tours, but on the day of the Ham House tour, Dave was making coffee using an outdoor tap, and had arranged some pretty delectable goodies!!
Posted by Ancestral Roofs at 1:26 PM