the story of a great Canadian magazine

The subtitle of this post could read "I may be the only person alive who finds this interesting, but since it's my blog..."

I've mentioned a few times Judith's incredible gift of many many issues of the fine Canadian old house publication Century Home. I have been working my way through the collection, highlighting articles for my research (and to read because they're just so darned interesting, as they reveal the evolution of our relationship with our heritage homes and domestic furnishings), from the Premiere Issue March-April 1983, through its decline (imho) into a 'décor trends' magazine, and eventual demise, in the way of so many fine and important Canadian magazines.


As old popular press and films do, the magazines also reflect a change in who we are: what advertising worked on us, what photography we found interesting (yes, early issues had some black and white photos still), what we thought our homes - and ourselves should look like. Oh indeed, there were plenty of big-haired gals in country peasant-wear and Victorian ruffles in early issues.

One morning recently, I spread the collection over every surface in my living room. My goal was to remove all duplicate issues, both to reduce the number I have stacked in my research pile and to make possible a trickle-down to some other old house nut. As I scanned the array, checking for doubles (which became as obsessive as a jig-saw puzzle), I began to notice different title styles. The magazine started as Canada Century Home. By the 1990's it claimed to be Canada's Magazine for Traditional and Country Living and by 1998 it was Canada's Magazine for Today's Traditional Home. Another change and by 2001 it was Canada's Magazine of Country Living and Style. 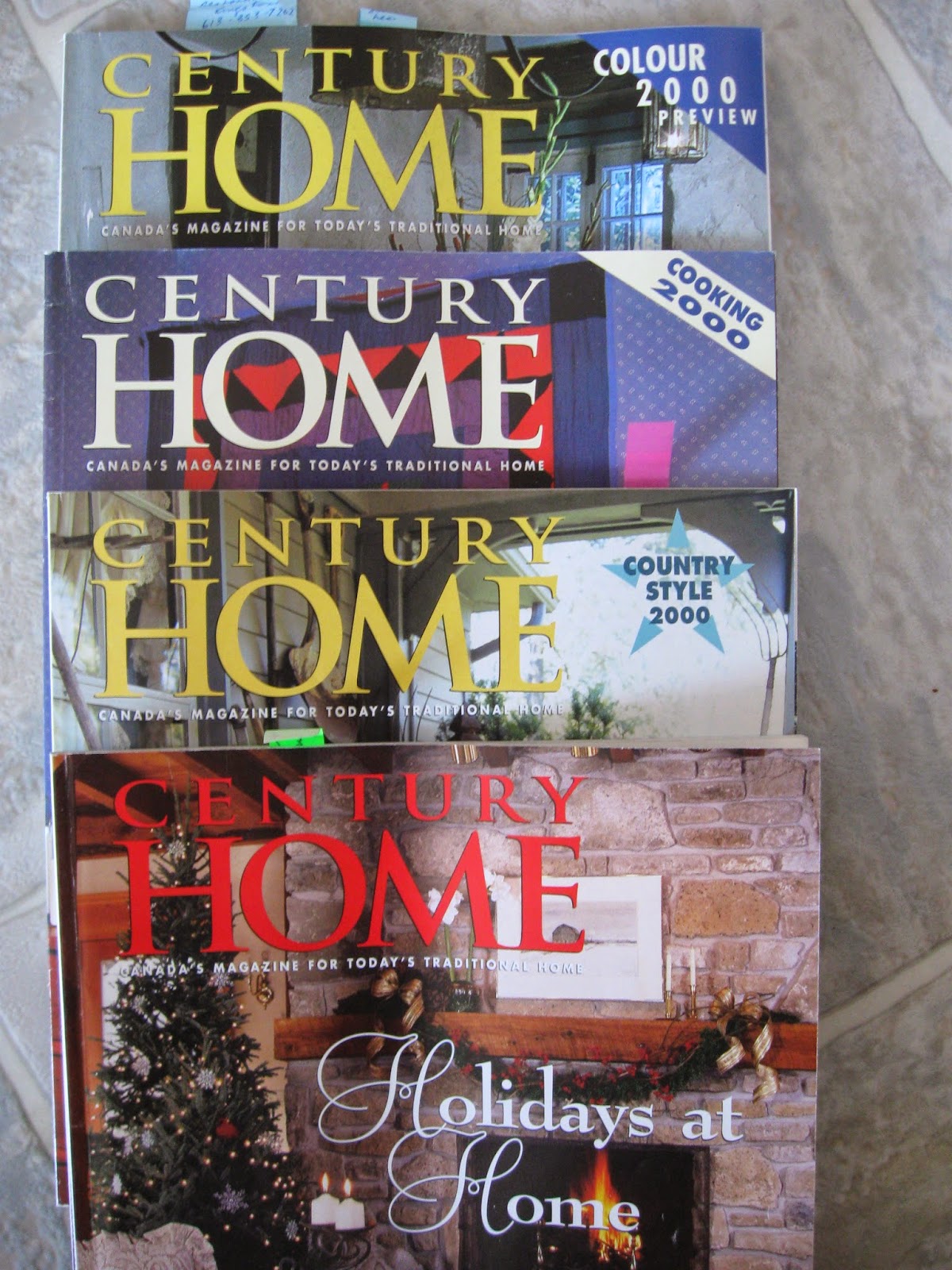 I would love to have been a cluster fly on the plaster, as editorial and layout discussions took place over the years. Joan Rumgay started out as editor, working from the family home in Port Hope. The impressive Tom Cruickshank guided the magazine from 1985 to 1997. Mrs. Rumgay reappeared as editor in chief in 1998, leading a talented group of contributing editors and by 2001 Erin McLaughlin took over. On her watch, Century Home evolved into a decorating magazine, with  stylish photography and clever tips on how to 'get the country look'. Fewer historic home visits, little heritage preservation sensitivity, limited Ontario town and family history, less information about architecture and furniture, no book reviews - less authentic somehow. Ryerson Review of Journalism (see link below) chided the magazine's earlier incarnations for their "rather limited focus on older homes." It's called Century Home, people, what would you expect!?

Erin was at the beginning of an impressive editorial career. By 2010 she became the "style savvy editor in chief" for Style at Home and Canadian Gardening. (Masthead's words). Erin brought her style savvy to CH - it's hard to explain the subtle changes, but I know that I fell out of love with it.

Here's what Ryerson Review of Journalism said on the matter the summer of 2002: "Century Home, now helmed by Erin McLaughlin, a former House and Home staffer, was repositioned in February 2001 as a rurally-oriented alternative to the more urban style of both House and Home and Style at Home." Despite very little experience in the trade, McLaughlin was hired "to create an entirely new identity for the sagging Century Home. Once a magazine for the genteel 50-plus rural Ontario woman, Century Home has morphed into a bona fide 21st century shelter book complete with clean modern lines and trendy décor. House and Home gone country, some might say." Ick. Here's the rest of the article.

Under Erin's leadership the magazine more than doubled its circulation in the first year. But where is it now? I wonder if there was more interest in the authentic and historical than the publishers suspected. Because that's how they lost me.

For the last word on this tribute to a great lost magazine, I offer publisher/editor Joan Rumgay's thoughts from the premiere issue, March/April 1983: "In all fairness, Century Home is not just a magazine about homes, it is a frame of mind. It is an appreciation of today's living but a freedom from the rush. It is a feeling of warmth and beauty; it is a desire for simplicity and serenity; it is a love of character and individuality; it is a sharing of information and experiences."

And as every last word begs for a post-script:
One very nice discovery in my exploration was several issues in which Diane Brisley features, writing about blanket boxes, wood-graining, stencilling and other decorative arts. Diane and John appear a number of times, as Tom Cruickshank followed their old house restoration journey from Peterborough to Bath to Centreville and finally to Prince Edward County. I got to visit them earlier this endless winter; the account of our visit will be in the Spring issue of County and Quinte Living.

Posted by Ancestral Roofs at 2:20 PM