Towers and turrets.They catch our eye first as we try to take in the rich detail of picturesque structures. Just recently I walked the entire length of Stirling's Main Street to get a closer look at this imperious bit of architectural snootiness.

Not long ago, I came upon a great article by Anne Brightman in a March 2000 issue of my cherished Century Home magazine collection. Anne at that time was Managing Editor of the magazine.The piece is titled 'King of the Castle:Towers and Turrets - Architectural Fancies' and it was all I needed to take a stroll back through my photos to see how often they appear 'ready for their close-up' in my collection.

Here's a useful fact: "Generally, a tower starts at ground level and can extend up to three stories in height. Its summit usually stands higher than the rest of the roof-line. Turrets tend to be smaller and more slender and may be corbelled out from a corner or projection partway up the wall." Thanks for that Anne.

And of course, towers and turrets were subject to the same architectural influences as the houses that bore them. 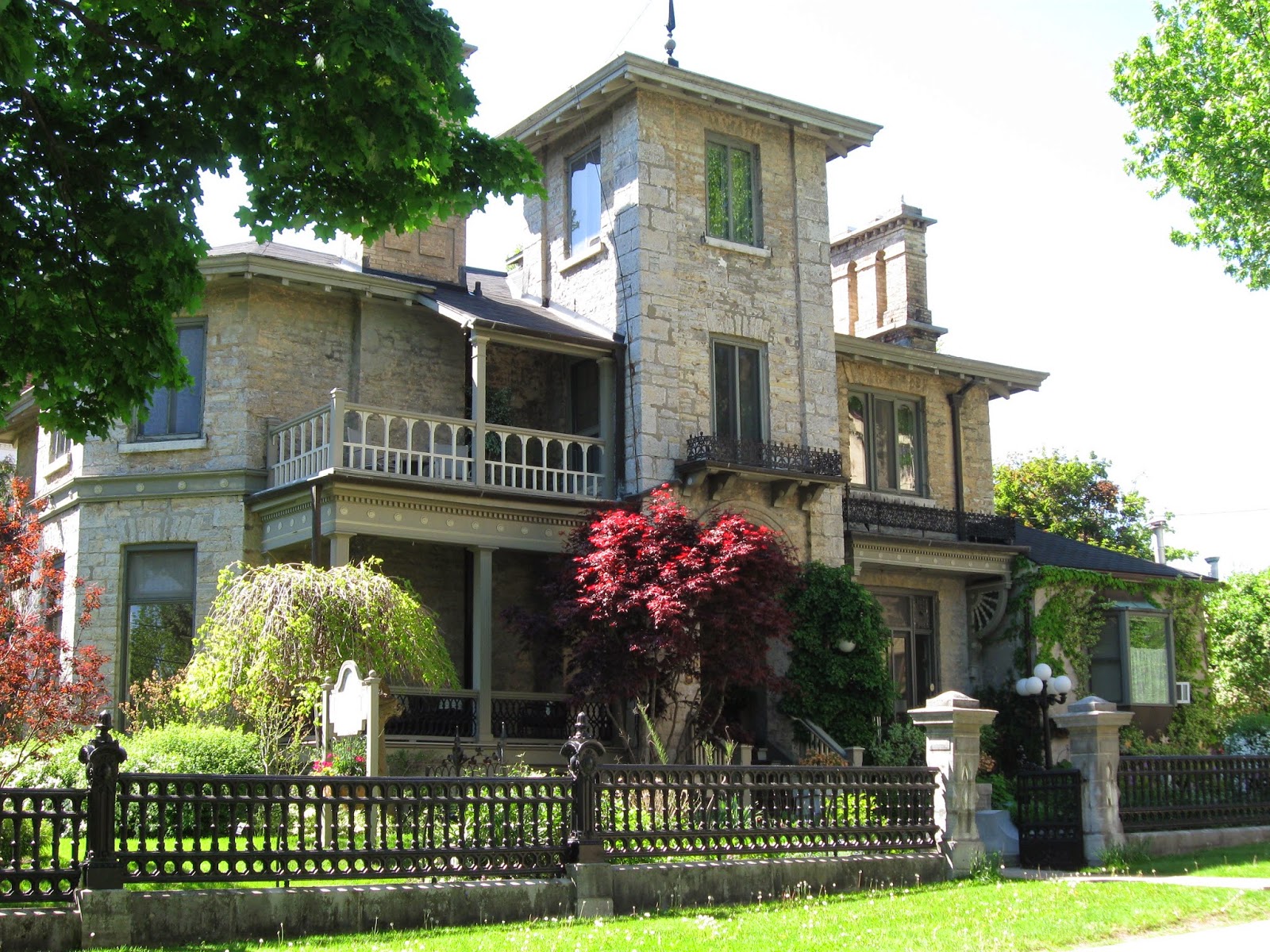 There's the Italianate, "inspired by the rambling, villa-like houses of Tuscany" with their campanile or watchtower. Very important for the mid-1800's landowner, not for watching out for enemies, but for looking down on people - and looking important.

Stationed at the main entrance, providing the wow factor vestibule, the Italian villa tower showed its flat bracketed roof well above the roof-line. Picturesque. Dibs on that tower bedroom. 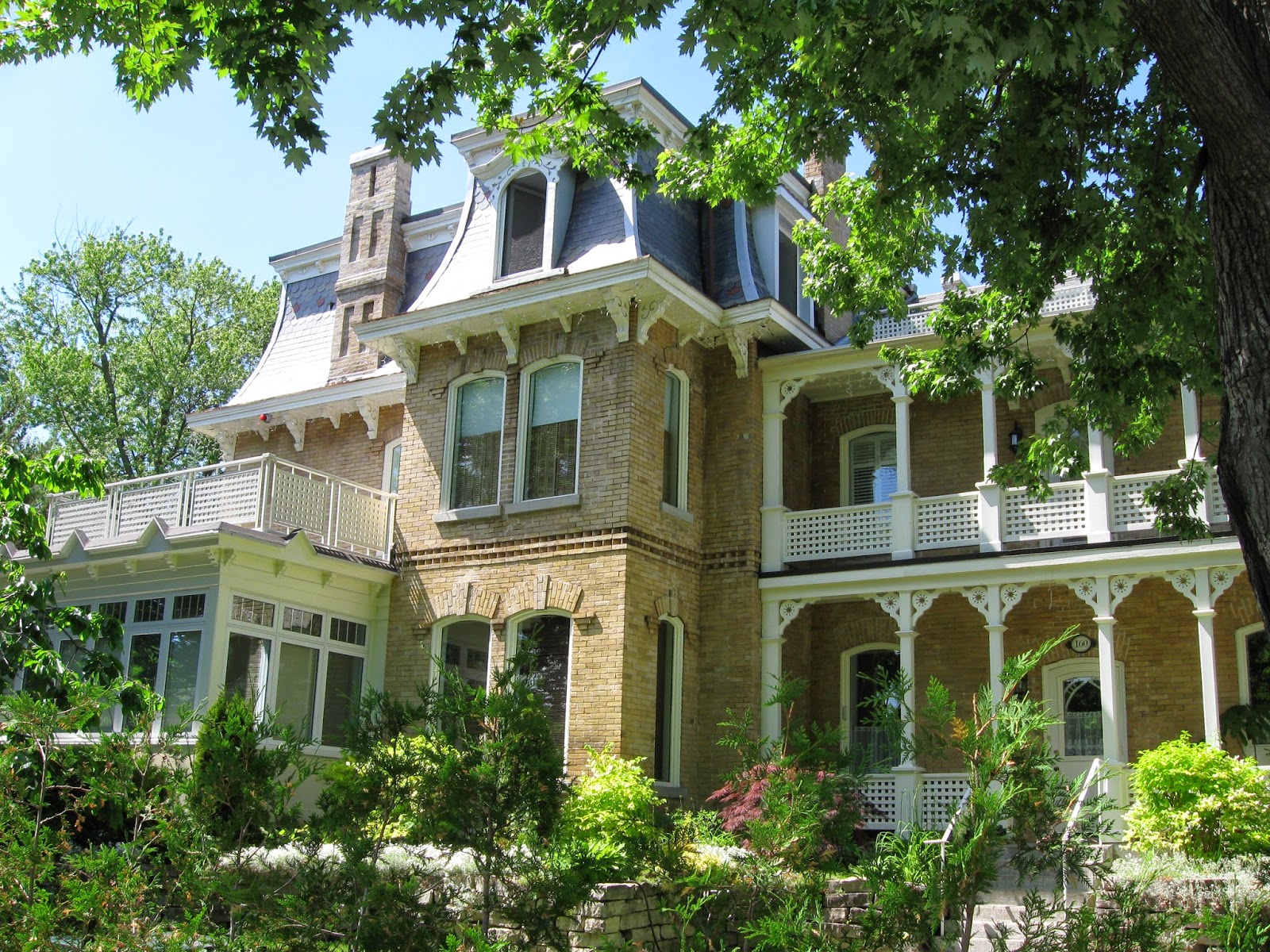 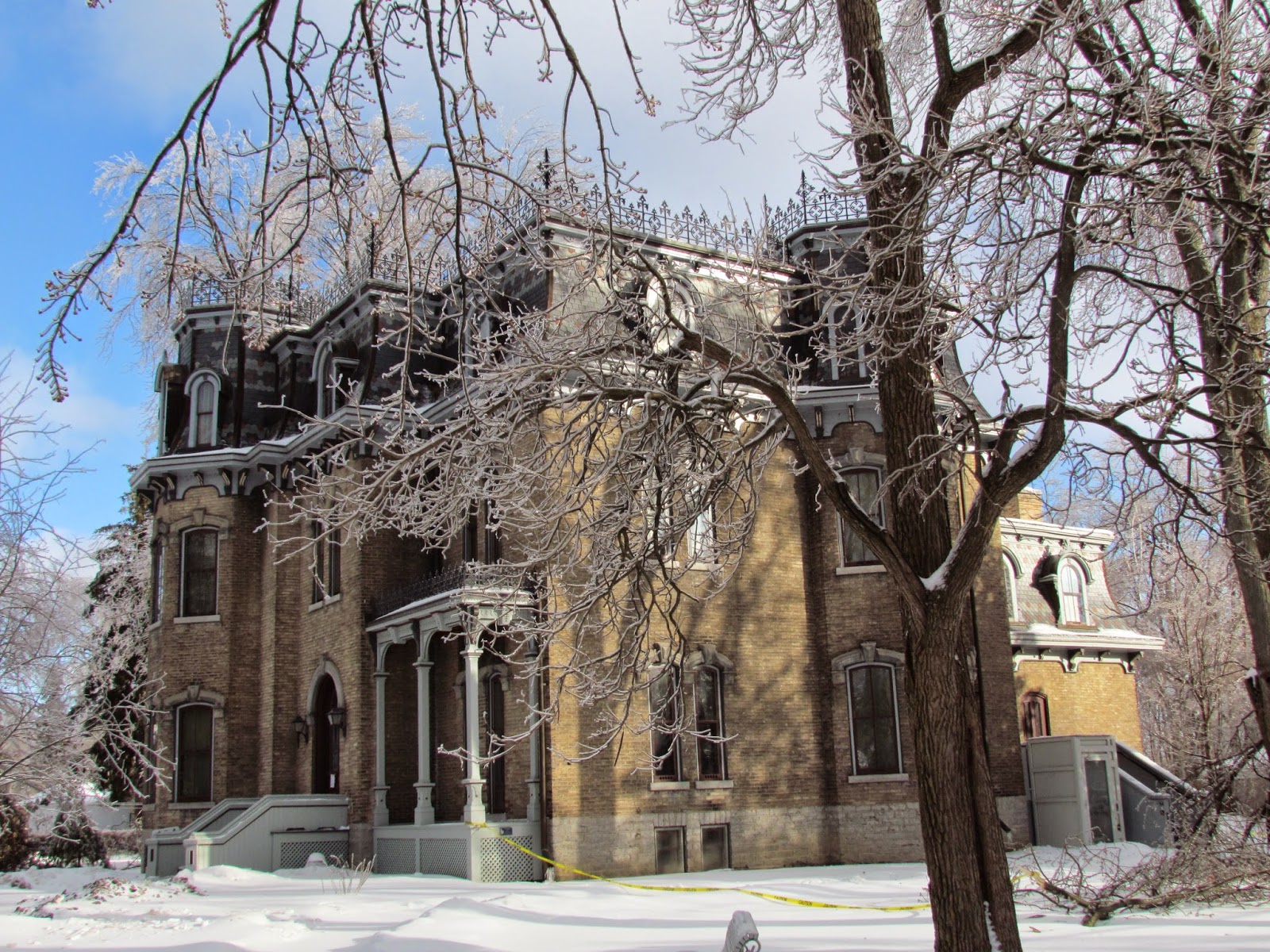 Towers added to the drama of the stately style's alternating projecting and receding planes.


Queen Anne Revival extravagance would not have been likely to overlook the impact of a tower. The style is so exuberant with "verandahs, porches, balconies, bays, turrets, towers, tall chimneys and steeply pitched roofs." (Brightman p. 79, CH). What better than a lofty tower to proclaim the wealth and social standing of pater familias?  Brightman speaks of the style's "rounded graceful examples" and continues: "Towers and turrets were offset, typically located on the corners of buildings, and were circular, polygonal or octagonal in shape, with tall conical roofs." 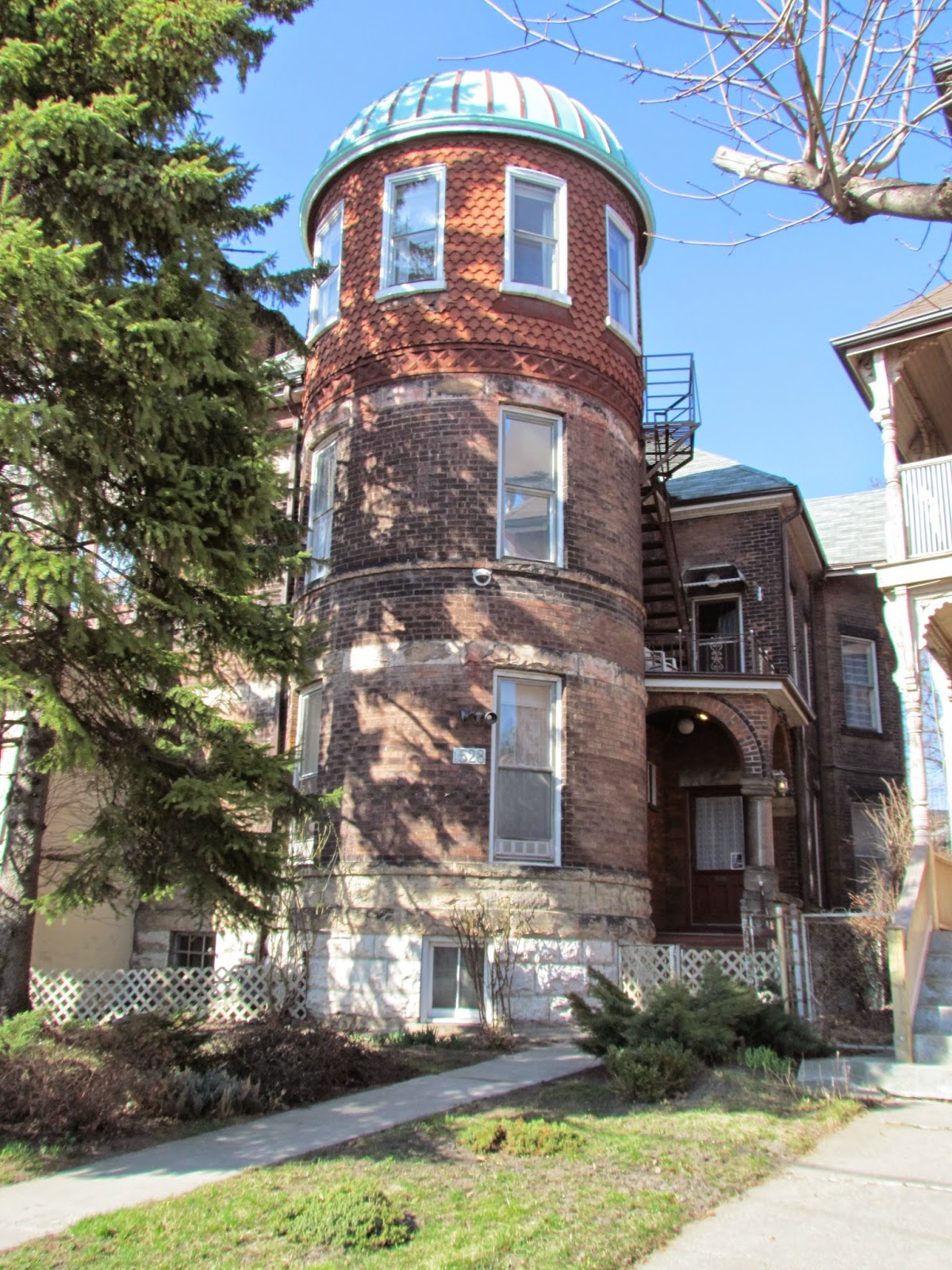 Brightman finished the essay with a nod to  Medieval romance, the Norman and Gothic castle, French chateau and Roman fort  recreated as an urban power statement. "Built by the exceptionally rich, as symbols of success and wealth, Victorian 'castles' tended to be huge and ostentatious, featuring large round towers with crenallated 'battlements' or tall turrets and spires with steeply pitched, conical roofs." Thanks Anne. Wish I'd said that.
She mentions Casa Loma (1911/14) and Victoria's Craigdarroch Castle (1890's). 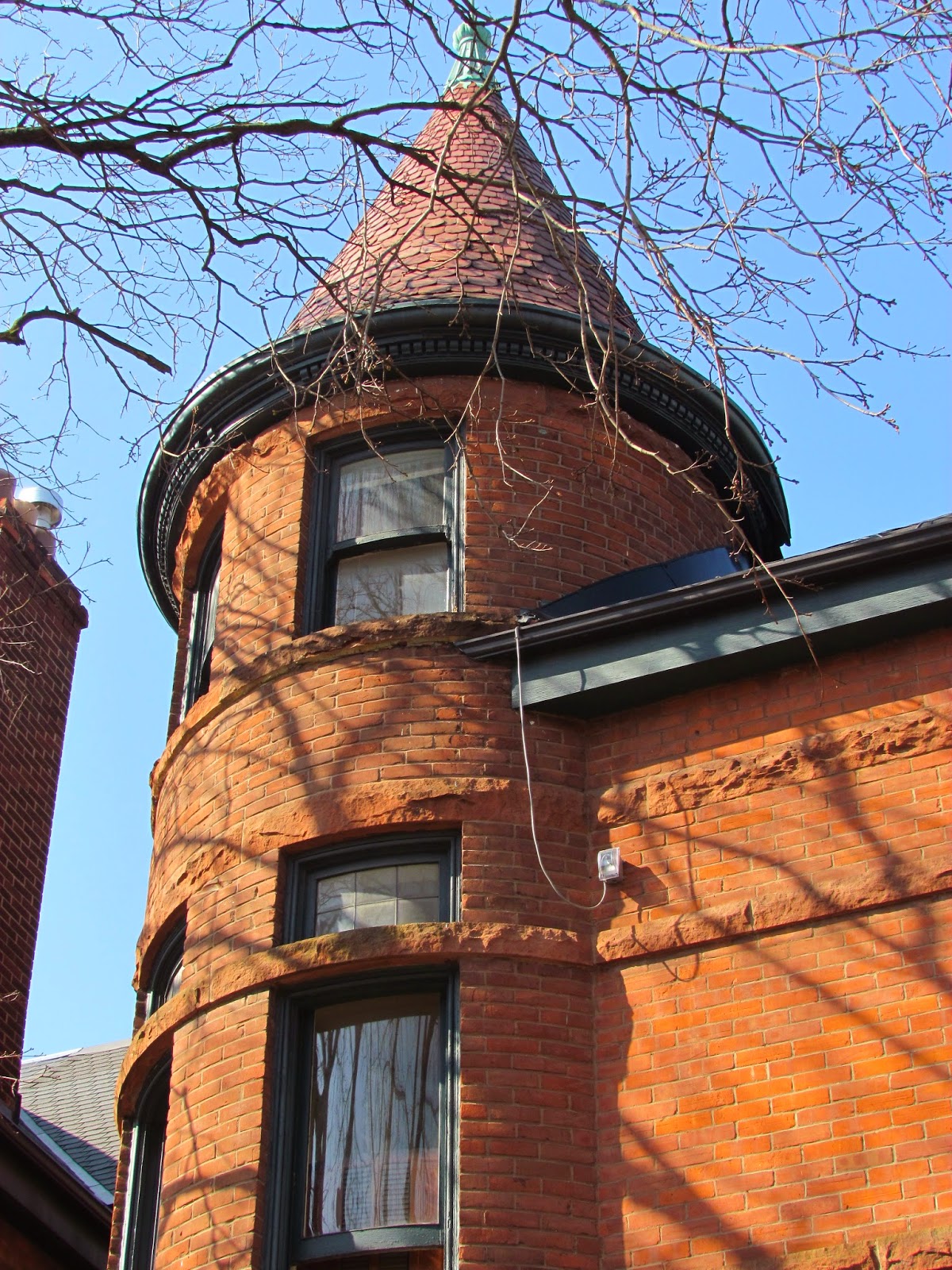 I suggest the Romanesque Revival homes of Toronto's captains of industry deserve a nod (well, a submissive and respectful bob). I need to capture some of the big ones, like the Gooderham's.  Romanesque Revival (with or without other Victorian inspirations mixed in) definitely have the Rapunzel
factor.
. 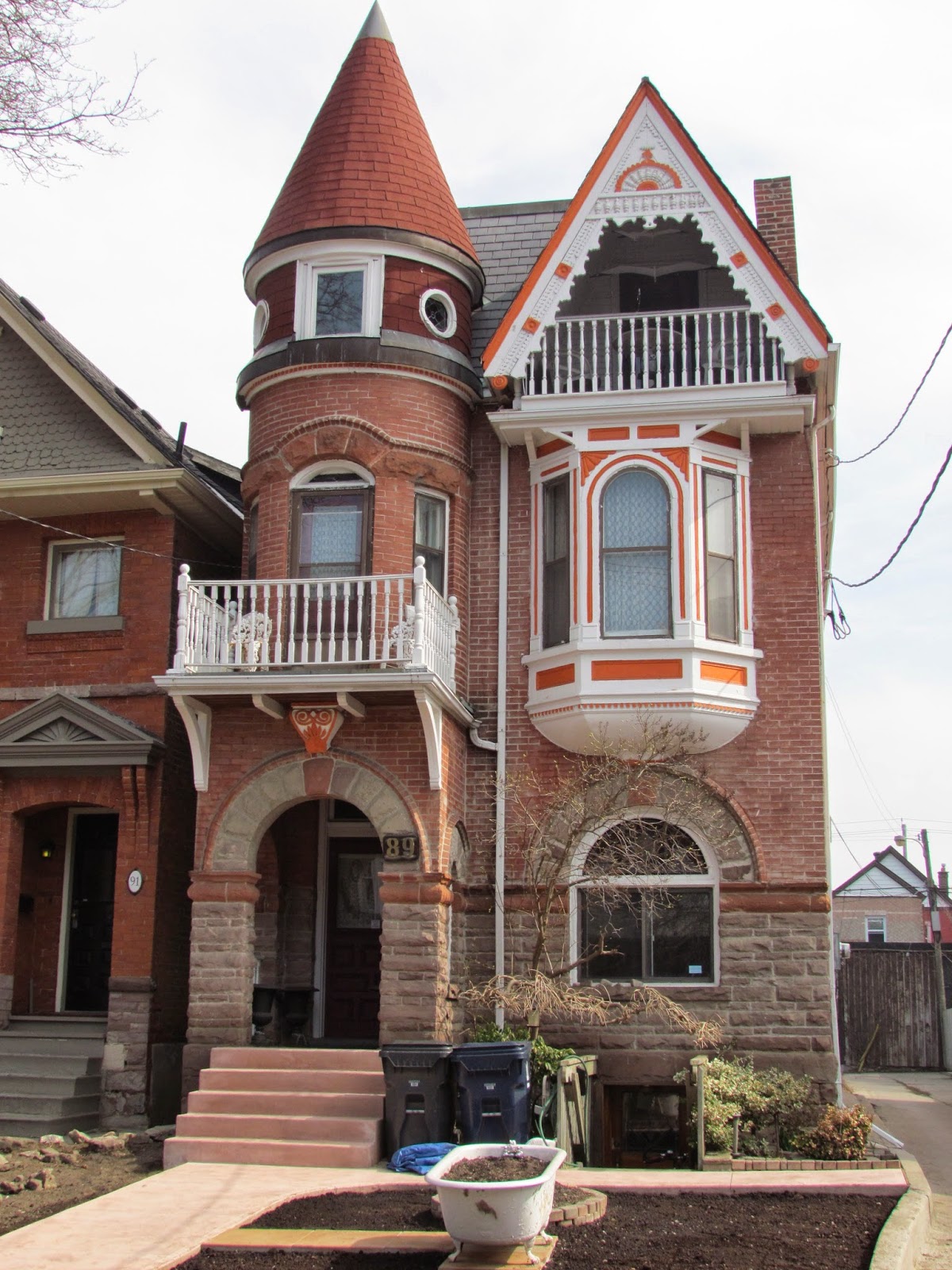 Toronto's Leadlay House, which became home to the Felician sisters, and now houses a community outreach centre, demonstrates the full flowering of the Italianate villa. There are some neat archival photos at this SpacingToronto link. (It's here, because Blogger would not let me put it where I wanted it - you pick).

The fascination with the tower and turret has not left us. Look around any modern monster home subdivision. Derivative towers and turrets. Same motivation.

I like the following two, which I will avoid categorizing, having just delved into Old Toronto Houses and gotten side-tracked by 'Annex Style', 'Shingle Style' and other distinctions made by the venerable Mr. Cruickshank. 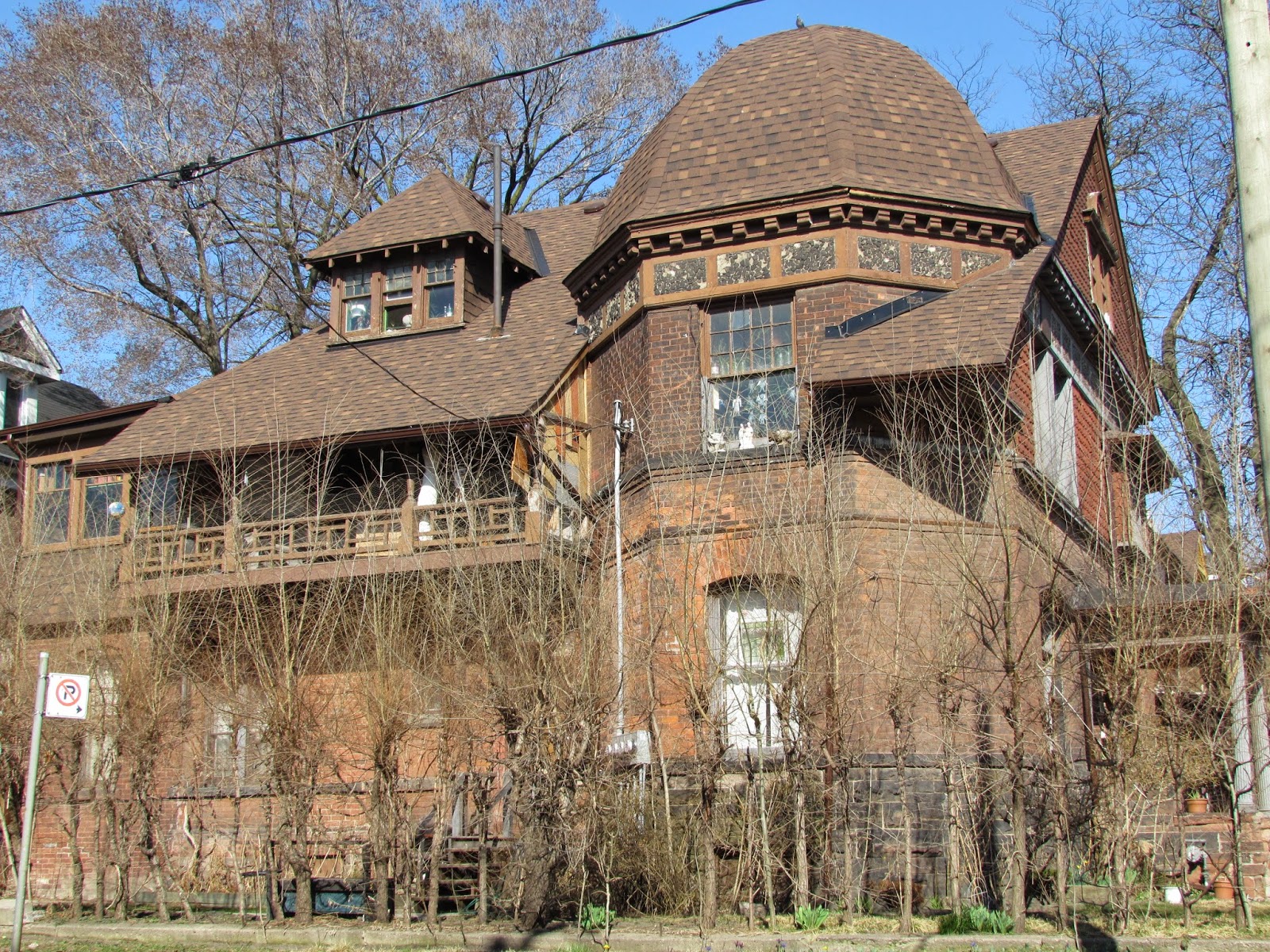 As the naturalist said, I don't have to know their names to love their song.


By way of ending this ramble, I'll acknowledge that I have intentionally overlooked the civic and religious buildings who resorted to towers and turrets to announce their importance, and the Canadian hotel chain which set out to make a Canadian 'brand' from medieval elements (what was that about?) If you can't get a visual picture of that, think those chateau-on-the-Loire hotels Chateau Frontenac, Chateau Lake Louise, Chateau Laurier. Another time.


Posted by Ancestral Roofs at 3:04 PM