Foundations, that essential Kingston heritage research tool, is a publication of the Frontenac Heritage Foundation. I am a proud member of that organization, having met with representative David Bull some years ago at a heritage event in the limestone city.

One tells the story of Picton's Macdonald Project. The fall issue of County and Quinte Living magazine features an interview with David and  Marilyn Warrick, who led this successful campaign to have a full-size bronze statue of Sir John A. (at the bar - no, the other bar) created by sculptor Ruth Abernathy, and installed in front of the Armouries in downtown Picton.

But the article which keeps drawing me back is a pilgrimage of sorts to all of the buildings associated with our illustrious founder. As the writer so ably explains: "The buildings in Kingston where Macdonald maintained his law practice, provided accommodation for his immediate family and relatives, or were his legal address as an elected official, are well preserved heritage sites, protected by the Ontario Heritage Act. Walking through their doorways is walking in the footsteps of the city's most famous citizen..."

Now, I haven't walked through many of these doorways, but I have stood and reflected in front of several. Now it's back to Kingston to complete the set!

Earlier this week I wandered old North Kingston, and found the c.1810 double stone house in which John A., his mother, father and younger sisters lived during 1935-9. Incidentally, this house was restored by the FHF in 1975/8.

And over on Earl Street, Sir John A. rented this house for his widowed brother-in-law and his sister. Macdonald seems to have been particularly encumbered with family responsibilities! The poignant story of his first marriage provides a different perspective on the public figure we think we know.

134 Earl Street was also Macdonald's legal residence while he was MP for Kingston, until 1889 (Duffy take note.) 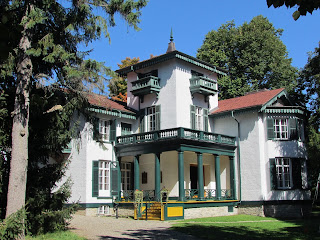 And Bellevue. What can be said about Bellevue, the poster child for the picturesque Italian Villa in Canada? Well, I've said some things. Here, for example. Or you can check the Parks Canada website for what looks like the definitive life story of the man (and the house is a short link away.) So. Only a few more to capture for the complete set. I will have to settle for archival photo of the c.1841 Heathfield house, as it was demolished in 1964.

And perhaps I can compensate for not yet having photographed his law office at 343 King Street, by affirming that I have enjoyed a pint there on several occasions. For this building now houses Sir John's Public House. I think the great man might have approved.
Posted by Ancestral Roofs at 11:09 AM