A Man Outstanding in his Field

Growing up among houses of white-painted frame, soft handmade brick and warm grey
limestone  - with the odd outcrop of cobblestone in Hastings County -  has led me to a fascination with a type of stone building not seen in Prince Edward County and other eastern Ontario locations. Recent conversations and research about threatened houses in the Whitevale area, have prompted me to find out more about fieldstone houses. I love the mottled appearance of muted jewel tones of granite, and am in awe of the extraordinary work and workmanship involved with splitting the irregularly shaped rocks to create uniform blocks for coursed stonework.

It's a puzzle how little information I have been able to find. My best source was my go-to book for wood construction (go figure) John Rempel's Building with Wood (UofT, 1980). He adds a chapter on 'Non-wood Construction' which contains some gorgeous photos of fieldstone houses. One in particular, on page 273 ("turn to the chapter in your textbooks") shows an exquisite doorcase (drool) in a house front of coursed stonework, near Mosport. Wonder if it might still be standing?

A website on drystone wall building gave me the only glimpse into the preparation of stones (because it's got to be really hard work, right?) "Use a wax pencil to mark the sections of the stone you want to remove. To make cuts you'll need a three-inch carbide chisel, a three-pound hand sledge, and safety glasses." And time. Strength. Endurance.

One of the fascinating features of Ontario fieldstone houses is their distribution. I'll let John Rempel explain. "In Ontario three kinds of stonework are to be found: the grey limestone in a belt running diagonally across the southern part of the province from Kingston through Guelph; the random fieldstone rubble with flush joints typical of the Pennsylvania-Germans in Waterloo County; the split and sometimes coursed fieldstone of the Scottish variety found in areas other than the limestone belt. These divisions are never clear-cut, of course, and there is considerable overlapping at the borders." (page 270.)

To understand this distribution I had to approach one of my other passions, geology. Our relationship is less than fulfilling as I haven't devoted the time needed, despite having collected some fascinating books. One of my favourites is Canada Rocks.

An on-line paper by Gerard V. Middleton, retired professor of geology at McMaster, helped somewhat. I found it on the Hamilton based site Raise the Hammer, a great site for dozens of topics related to that vibrant city. Middleton explains that fieldstone "was collected from fields or streams, rather than quarried from bedrock outcrops." I've written often about cobblestone houses, the palm-sized stones painstakingly collected for the day when a house could be built.

The building supply stores left by the great glaciers' debris fields included stones of various origins (light Canadian Shield "granite" and dark amphibolite for example - think pink, grey, black.) This wealth was available only in certain areas - scraped too clean and the bedrock was exposed (revealing stone for quarrying - think limestone, sandstone.) Patterns of moraine distribution might result in overburden with a dearth of suitable large stones. I am guessing that the pocket of fieldstone houses in Whitevale and areas around Toronto is linked to the Oak Ridges moraine. 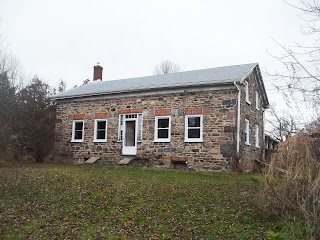 Regrettably I have few photos. The photos of threatened fieldstone houses in Whitevale are courtesy Steve Redman of ACO Collingwood. I wrote about them recently.

I came across a few others in my quest; I'll pause a moment while you run to your library shelf. 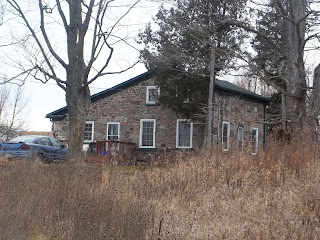 This link to a Durham region newspaper highlights the Walter Percy House (c.1875) which as of press time in June 2014 was being saved from the forces at work in Seaton township. One of the photos shows the closers.

Here's a rubblestone Pickering Farmhouse which has made it to National Historic Site designation. I hope it will survive the current GTA trend of tearing down historic communities to build new developer-designed ones.

This link to the Pickering Municipal Heritage Register lists an astonishing number of designated or properties 'of interest'  in the area east of Toronto.Two years ago I found this story about a number of Pickering area homes being offered for free. One of them was the Richardson-Will house. I have no idea where I captured this photo (if it's yours let me know.) 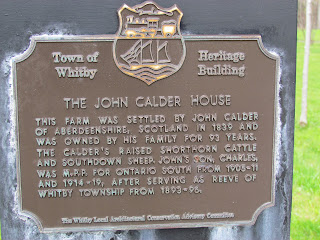 One final note. Who built these fieldstone houses? The top 3 photos of a lovely home south of Myrtle, offer one possibility. When Denis stopped to let me grab a photo, I made contact with the owner and we had a great chat. He pointed out the heritage plaque, and suggested that the stone came from Scotland as ballast in cargo ships returning empty. I've heard these ballast stories before. Thomas McIlwraith (Looking for Old Ontario, UofT 1997) mentions roofing slates from Wales travelling as ballast in ships returning empty to Ontario.
More likely, after absorbing as much geology as possible for one day, I come to the conclusion that German and Scottish stone builders, with their different masonry techniques, looked about them at the farms' annual crop of rocks, and rolled up their sleeves. Gerard Middleton provides an answer to why the techniques differed: different traditions. "The Scottish were skilled in cutting stone, even the hardest granites; while Germans preferred to work with wood (think Joseph Schneider House) and had an ancient tradition of using fieldstone in its natural shapes."
Posted by Ancestral Roofs at 5:31 PM