Bride on the Tracks 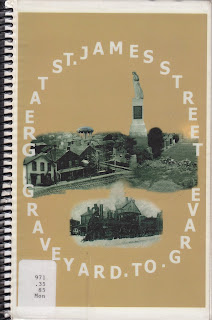 Great St. James! Sounds like an expletive from a bombastic British army officer mindful of "the ladies." A bit grand. Not a name for a small Belleville street. Certainly not a street in a working class neighbourhood/industrial area with the Grand Junction railway running down the centre of it.
But there is a Great St. James Street, and not long ago I came back from taking its picture.

I have often shared my appreciation of local histories.
Self-published. Photocopied photographs. Editing errors. Inexpert in many ways.
But what I value most about local histories is the writer's intimate knowledge of the subject, as he or she is usually trying to capture a time and a place important to him/her, in the face of change which is taking that history away. 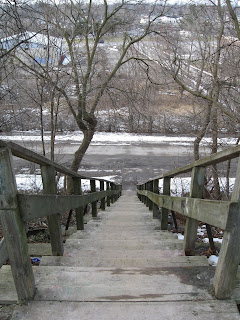 This is so very true of a recent find, Great St. James Street: Graveyard to Grave, written by Allen E. Montgomery in 2007. "The stories were written as a tribute to the street where I first resided when I moved to Belleville," Mr. Montgomery states in the introduction.

Great St. James Street is snuggled under the edge of the great sand hill from which the neighbourhood above took its name: Old East Hill.

At the top of the stairs in the photo is the relatively affluent Mount Pleasant Road, the northern extremity of the posh OEH.  To the right as you exit the steps is a lovely property. Here in the 1790s the founder of the city, John Walden Meyers, built what many call the first brick house in what is now Ontario. (I expect that lots of other towns make the same claim.)

The author recalls Mildred Baker, one of the good wives of Great St. James Street climbing the steps to do house-cleaning for a family above.

Now, everyone back down the stairs, and Mr. Montgomery will acquaint you with his neighbourhood, c. 1948. He worked at Belleville Creameries on Station Street, in a neighbourhood hopping with small industries, backyard mechanics and businesses evolving from Bernie Wheeler's junkyard to Harrison and Walton Sash and Door Factoy, to Mott's lumber mill, then Trudeau's Chrysler-Plymouth and Allis Chalmers franchise.

Allen describes the old homes, some well kept with rose-bushes and tiny lawns, others not so much. The railway track directly outside his boarding house was notable: "...no more than ten feet from the front door of the house. There was only about six feet of lawn, a thirty inch sidewalk, two more feet of ground and then the raised track." This was Belleville's own Grand Junction rail line (begun 1872.) The tracks were the backgournd for the lives lived there;  they appeared in photos with family groups, blushing brides and bicycling urchins with dogs. The writer describes the lengths to which neighbourhood wives went  on laundry days to evade the rain of soot from passing locomotives. He writes: "often as one opened their front door they would face a passing steam engine pulling several box cars." But you get used to it.

The red brick house above is emblematic of the age and history of the neighbourhood, and its resilience. Mr. Montgomery boarded in a white frame house of similar proportions which stood right next to it. The houses were built by William and Zenos Dafoe. The brothers built the  famous  Dafoe Hotel, the city's most impressive hostelry to date, which burned in 1883 and was later replaced by not one but two Quinte Hotels (I told the Hotel Quinte story in several 2012 posts. Here's a sampling from  before, during and after.)

Of his boarding house at 42 St. James Street, Allen Montgomery writes: "My brother Leon and I shared one small bedroom in the upstairs part of the home. One boarder slept on a cot in the upstairs hallway. Mike...[in] a very small bedroom off the upstairs hall. Two girls from Thomasburg used a bedroom at the front of the house next to a very busy bathroom....The downstairs was where the owners, Mr. and Mrs. Dafoe lived. They had a kitchen and a small bedroom...the living room was where their son Claude, his wife Ana and their young son, Billy lived."

Humble. But you never hear this man complaining. Doubt there was much of it in the neighbourhood.

So, here's a sampling of what is there, and what is not. I am fascinated by the industrial and commercial enterprises operating at various times, which Montgomery mentions, all long gone. It's a thing I do. The Coca Cola plant (1922-53). Ives Pottery Works. The Lott flour and woolen mill on the river, the lumber mills "directly behind" No. 42.

There are lots of open lots, fenced off to discourage exploration. Homes or businesses, can't say. But street names like Foundry Street and Station (the former Mill Street) have industrious stories to tell.

Cemetery Street, the overgrown  eastern extremity of the street, was the route along which funeral processions used to travel to the now abandoned Catholic cemetery. Today you can see the green entrance to the trail, and the remaining business on the street, an auto electrics shop.

The book contains memories of the vegetable gardens and the fresh-water spring south of Stokes Street, where neighbours fetched water before the 1930s. Other neighbours, "the hillside mechanics" did their own car repairs under the trees. Horse-drawn milk wagons and ice wagons once kept the housewives happy.

The writer challenges us to find traces of the old coach road that once angled up the overgrown hillside to service the neighbourhood above - and served as a lethal sledding run in the off season. I found it, but it would be invisible in summer.

I can't find anything about this surviving double house. It appears to have stood beside a fine brick home which was built for Mr. Lott in 1912 (now an empty lot.) I'm guessing it too has seen better days.

And then there's the story of the Tennant stone house, but I'll leave that for another time.

Thanks for the great read Allen Montgomery. And thanks to Gerry Boyce who introduced us.

Posted by Ancestral Roofs at 1:07 PM