I'm still savouring McBurney and Byers' offering There is a Tavern in the Town. I originally mentioned that most of the examples of early taverns that I have seen stand along the old Danforth Road. Later I discovered that a few travelled that very road themselves and ended up in heritage villages like Upper Canada Village. All good.

So, off to 'the local.' Here are three Prince
Edward County choices of which I am especially fond.

Thomas Eyre's Inn features in a lot of my reference books. Homesteads (same authors, U of T, 1979) describes the citizens of Hallowell Bridge meeting in an earlier structure on the site for refreshment and business from 1800 on. They describe this building as "stone with rough cast over" and point out its important location on the Danforth Road - a different sort of traffic hurtles by these days. The Settler's Dream comments on the double-pilastered doorcase with wide sidelights" and the french windows on the wraparound gallery. From what I can tell, the owners are doing a good job at what must be an enormously challenging property to maintain.
It's always a pleasant surprise to see this classical beauty on a curve in Waupoos. I recall mom talking about Roy Stevens, who lived on this property and had a cabinet-making and upholstery business right at the roadside when I was young. The structure, clad in barn-red painted board and batten still stands.

I can imagine Mr. Stevens, with his love of heritage and fine craftsmanship, could not bear to see the dilapidated state of the sophisticated Greek-Revival detailing on the timber-frame Hayes Tavern (1837/8)  in Consecon. In 1966 he arranged for the still solid Loyalist structure to be disassembled and transported - as only the truly dedicated can do; the work required must have been brutal -  and moved to this idyllic spot. An article in the February-March 1987 issue of Century Home describes the project, the exterior restoration complete and exquisite. The piece includes photos of the interior still in the early stages of restoration  - and domestic life going on around it. A salute to Mr. and Mrs. Roy Stevens is warranted!

To the right is a photo scanned from the issue in my Century Home collection. There is no photo credit. The magazine is defunct. A Google search turns up a heritage paint company when I try to locate the publisher Bluestone House Inc. Tom Cruickshank if you're reading this, let me know who to thank!

The building's poor state is evident. It wasn't possible to restore the building in situ. The half that was rescued was in better shape than the later sagging addition. The sign Porter's Hotel shows up on the facade to the left; Robert Porter was inn-keeper from 1869-95 according to Tavern in the Town. Yet another owner may now be in residence. I note a for sale sign standing on the lawn the day the Streetview folks passed by.

The Settler's Dream features other 'before' photos, including one around 1900 when the hotel was looking quite fine indeed, although Cruickshank and Stokes note that the original glazing pattern of the doorcase was missing - a restoration job for Roy Stevens.  The authors identify another Consecon building as the hotel's 'twin.' Lots of Greek Revival influence in Consecon and Demorestville, some succumbing to vinyl-ization others just succumbing. Surely I've posted something?

Our final watering hole is the much-changed but very old (c.1815) Stage and Ferry Inn, built by Elephalet Adams, New Hampshire UEL, standing near the PEC end of the Glenora Ferrry crossing in the community then called Stone Mills. The standard 'Loyalist' form was distinguished by a massive stone chimney at the centre of the hip roof, which Cruikshank and Stokes observe was "not uncommon in the houses of eighteenth century New England where the hearths were clustered around the stack to keep the building warm, but is a rare find in Upper Canada." Never mind, gone now.

The current appearance of the building is its recreation as 'Glenview' in 1912 according to The Settler's Dream. Byers and McBurney (Homesteads, UofT, 1979) relate that it was purchased at that time by John Green, owner of the ferry (and foundry-man at Stone Mills.) The original form did not have a verandah; I think this Edwardian era gallery is a welcoming improvement. 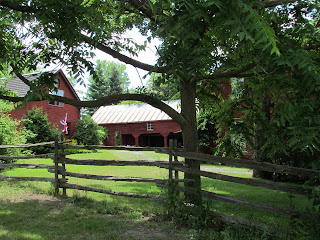 I've always loved the barn complex beside the former inn. Doubt it was as green and pleasant in the days of stabling and changing stage coach teams. According to Homesteads, these barns were built by John Green around the turn of the last century, though there must have been some stabling from earliest days. The buildings are beautifully maintained, even to the glazed lantern atop the barn. I featured their fence in my wee chapter in Wind,Water, Barley and Wine.

The inn was operating as a bed and breakfast when I took these photos in 2012. It's been well known as a hostelry since it was receiving bone-weary stage passengers along the Danforth Road. 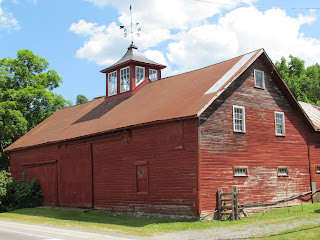 Glenora has been a thriving community for ever so long. The prospect of trying to precis its long history is beyond me this morning. I did a pretty good job for County and Quinte Living magazine in Spring 2013 (page 27ff) should you want to have a browse.

Posted by Ancestral Roofs at 12:15 PM