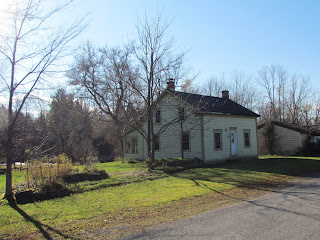 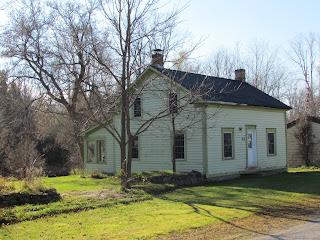 Another favourite 'street' in Newburgh is Water Street west, if you like. There's lots to be said about the "early streetscape" which the writers of Rogues' Hollow describe with great appreciation, that block of early homes on the 'common' (my name for the open ground which likely harboured something industrial at one time) above Hooper's Mill and the Little Napanee River on the eastern section of Water Street.

But amble westward with me this trip, down this lane along the river.

Rogues' Hollow pays scant attention to this little neighbourhood west of the meeting (intersection is just too urban a word) of Water and Mill Streets. I was intrigued as the street just 'peters out,' ending at the river (now there's an expression that just popped out of the family favourites phrasebook. I had to check its origins; now it's revealed itself. Phrase Finder suggests that "the earliest known use of 'peter' as a verb meaning dwindle relates to the mining industry in the USA in the mid 19th century." Thank you mister Google.)

You can see the sparkle of sun on the river to the extreme left of the photo at the top. I loved this beautifully painted prim little frame house and its gardens along the river. I'm not sure if this is the Rogers/Bagyan house that Stokes and his co-writers describe as "a frame house built about 1910 on an old stone foundation." 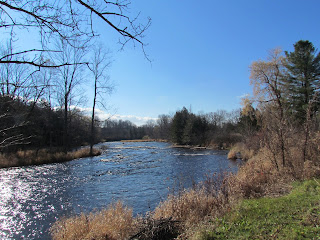 Although greatly changed from the photo in RH, the well-proportioned white house below must be the c1850 John Black house. Modern cladding has covered most of the detail, and that plastic porch masks what the writers describe as a "front door framed in the style of the 1850s" - if it even survived the makeover. But you can't miss the early proportions of the house, or fault the setting beneath those pines, looking across the road (which by now has dwindled to a gravel lane with grassy centre) overlooking the river.

And by way of proving that modern is not always bad, the location on the riverbank, directly across from the house, in the 1870s, was an industrial complex. Mr. Black operated a tannery in that spot. Not so fragrant as the breeze off today's bucolic creek. 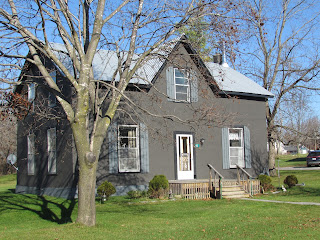 I'm thinking this dark grey painted house might be the Black/Ruttan house c1865. Although it's not shown in RH, the text refers to a house with a gable over the front entrance, and a "slight asymmetry of the front" which signalled a larger room to the left of the door. Or could that have been this one?


And finally, returning to the 'intersection' we see across Front (Mill) Street the Lockwood/Godfrey house from the mid-fifties (1850s.) Although not visible from this angle, there is an entrance in the south side also, which the writers suggest might mark it as a store sometime in its history. 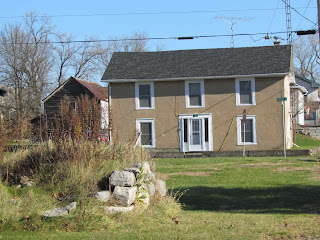 "Vestiges of the cornice survive, as do the eaves returns and the plain outline of the doorcase...the sidelights to the entrance give some indication of its former character," comment our experts in 1983. I like that the stucco is nicely painted, and the property well kept.

Signs pointing the way to a riverside ramble:

A collapsing house, with piles of limestone suggesting a more impressive structure once stood nearby? 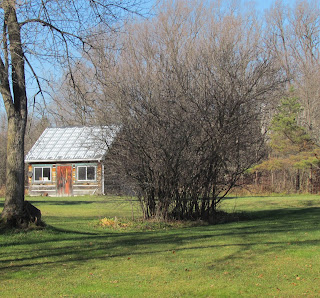 And behind the log outbuilding, behind the last house on the road, what's peering through the trees?

The Academy out on Concession Street.
Posted by Ancestral Roofs at 1:02 PM