And where are YOU from? 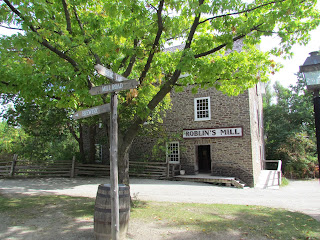 When I started this post it was the end of February, and it was raining. In torrents. The few grimy snowbanks were giving way to streams of water churning down our lawns and streets. Rivers and streams, in such jeopardy from last summer's drought, were gaining confidence again. Creeks were rising. 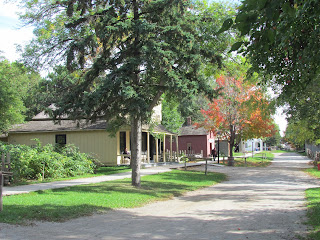 It was a great day to pull out photos from one of my favourite creeks, Black Creek, that tributary of the Humber which runs through a lovely old village. Which really isn't a village at all, but a heritage park not far from the intersection of Jane and Steeles in Toronto. Oh, you've guessed it. Black Creek Pioneer Village. 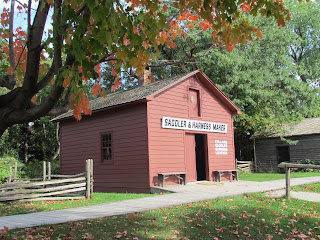 A virtual wander through these deliberately dusty streets has put me in a thoughtful mood about historic village parks. Now you may know I'm a big fan. Upper Canada Village and Lang Pioneer Village are two exquisite places to time-travel, and I've written about them often.

Black Creek Pioneer village was created, credit in large part to a Mr. Russell King Cooper, to be "a replica of a typical 19th century crossroads settlement in southern Ontario." Somewhere else I read it portrays life around 1867. So this could be my Canada 150 offering. 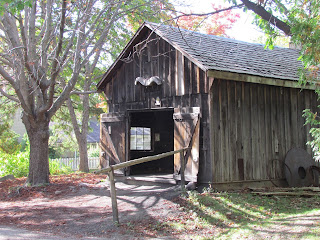 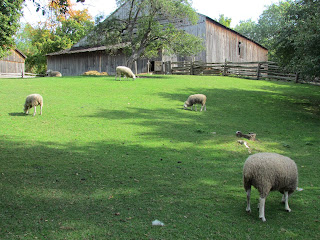 I picked up a book by the Mika's, whom Belleville people will know, at the shop. Black Creek Pioneer Village (Natural Heritage Books, 2000) sets the scene, "a time when travel was measured in days, not hours, and when life was harder and simpler but rewarding." The introductory passage continues, hypnotically: "As you walk down the dusty road along 'Queen Street' you find yourself drawn into the life of this pleasant little community until you become a part of it and the gentle rhythms of its activities take you back in time." (page 15) You see yourself passing the harness shop, watching an old dog in the sun, an apprentice scuttling by. 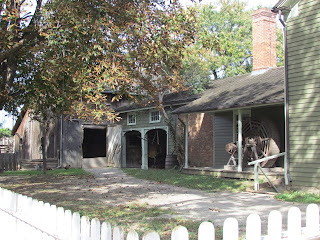 You notice ladies in sunbonnets at the general store, and wait for the stage coach at the Halfway House. You hear the school-children at play. You get the idea.

And it is lovely. And so important, for us to remember where those of us whose ancestors took up their land grants here, came from. And for school children, and folks new to the country, and urbanites, to understand the country and its agricultural roots.

But people, as lovely as it is, it is pretend. 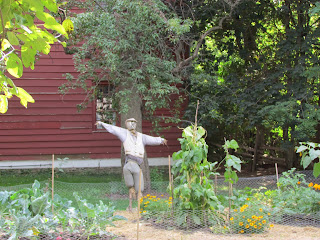 Here's where my thoughts are taking me on this visit. Today I am thinking about provenance. Where these buildings came from. Whose they were. What were they used for? What life did they contain?

For the reality is that all but the Stong homestead (which I wrote about here) were dismantled and moved from their original locations, and restored  for educational purposes. Lovely, but almost too perfect. I'm a farm kid, remember? 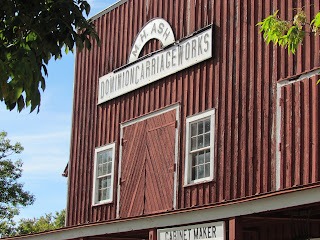 I would love to know the discussions that took place in their original towns, villages, before the move. Were the structures derelict or in good condition? Why were they moved? Who was behind the plan? Was there impassioned local opposition, or grumbling about the cost of moving an old husk ready for the bulldozers? What prompted the move? Road widening, subdivision development, city encroachment? 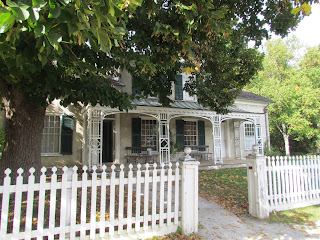 Provenance. Some of the meaning of an artifact is contained in the story of its origins: who owned it, when, what was it used for? The provenance of these buildings has largely been lost; the story recreated. The buildings are renamed, cast in new roles to create this replica village.

I would like to know a bit of the back story. Who built them, and the communities around them? What were they like? I'm sure that some of these villages were buried as the juggernaut Toronto moved over the countryside, surviving only as a dot on the map. But I do go on. 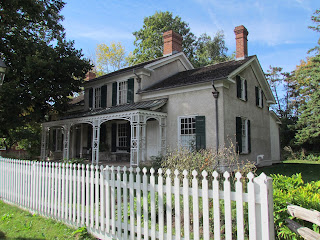 There is only the sketchiest of information about original locations in the Village Guidebook, or the publication I've mentioned. However, I did find a great page on the Village website, which provides lots of what I was looking for.

Some lovely friends recently mistook this photo for my house. I only wish. Mind you, if I had the responsibility for this c.1830 Greek Revival double house with the copper-clad  Regency awning verandah, I likely wouldn't have time to sit here and create this post.

This house originally stood in Chinguacousy township (Brampton today.) It was a farmhouse, home to two generations of a farm family. When was the last time you saw a farm in Brampton?The house was dismantled and moved in 1973, opened in 1978.

It's now playing Doctor's House, one half of the former family farm home doubling as the surgery.


Exquisitely furnished. I feel a furniture study coming on.

BCPV's dignified plain Mennonite meeting house hails from Edgely, a community which was born, lived and died, at the corner of today's busy Jane Street and Highway 7.

The website recounts that it was transported, intact and original, in October 1976. Fortunate. It's the oldest meeting house in existence in Ontario. 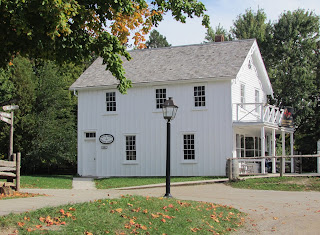 The bright white board and batten house at left dates from c1850, Woodbridge. I recall heading out that way one summer night in 1986, needing a taste of country during my incarceration in a tower at York for a summer course. Even then, the evidence of development was everywhere. This building housed a hardware store, with a Masonic Lodge upstairs. It was moved in 1983, opened 1984. Today it interprets the tin-smithing trade. 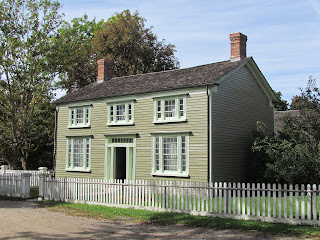 This elegant Georgian with a surfeit of Wyatt windows was imported from Woodbridge, once called Burwick (today the house plays Burwick House, and is a one-way time travel ticket.) It was built by Rowland Burr (clearly a man of substance in town) in 1844.

Sounds like a real rescue story: "the front portion... was moved more or less intact...the kitchen wing was then reconstructed as authentically as possible." In 1958. 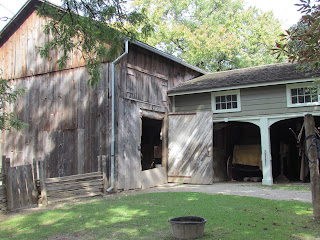 The lovely barn was restored to the original form. Such a sheltered spot in the ell. I remember old-style homes from my childhood, the house with kitchen tail, summer kitchen and woodshed adjoining them, maybe even a link to the drive-shed and barn complex beyond. Also remember seeing one such homestead go up in flames, as a child. 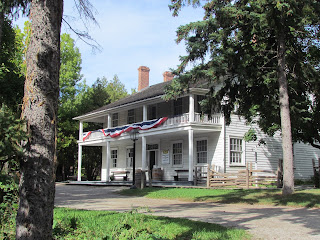 This frame Georgian style inn was built in 1849 at the intersection of Kingston Road and Midland Avenue, in Scarborough. Things were different then. The tavern would have been a Halfway House, a rest stop (and goodness knows it would have been necessary) for drivers and passengers on the stage coaches bouncing along the rudimentary roads on the  Dunbarton, Pickering, Toronto route.

The building had been changed over time, but fortunately the Village had the expertise and resources to restore it to original in 1966. Lucky us. 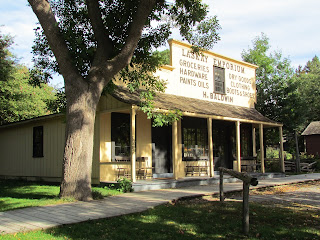 Joseph Baldwin built a general store and post office in Laskey, Ontario, in 1856. Imagine the buzz - the settlement had arrived!

The store evaded demolition and took refuge at the Village in 1960. The website describes the scholarship involved in returning the store to 1845. Love the boom-town front and the sloping roof verandah. 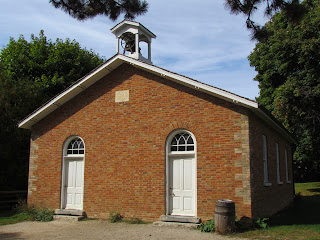 This red brick schoolhouse, with the his and hers doors, round headed windows with tracery, the wide shallow pitched roof, special brick work in voussoirs and quoins, and modillions under the eaves, doesn't resemble the typical one-room schoolhouse in our area - like the one I attended. 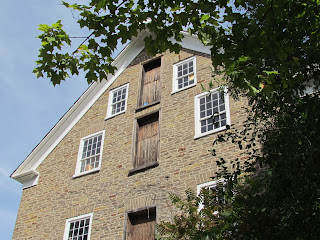 Perhaps it's standard issue in Markham area; this is the 1861 Dickson's Hill School, S.S.#17. The local hand-made bricks were moved one by one, and rebuilt at BCPV in 1960.

And of course, there's the story of Roblin's Mill, from my neighbourhood of Ameliasburgh, Prince Edward County. Told the story back in 2015. Still a good read.


There are so many more exquisite buildings with stories to share. Maybe another time.
So. See you next time you're in the village?
Posted by Ancestral Roofs at 12:18 PM