Parable of the Wheat... 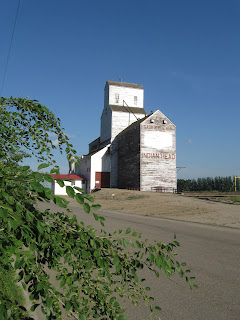 When we visit the west, I look for grain elevators. They're getting harder to find.  The human scale of those iconic frame elevators, with their attendant railway stations, sheds, water towers and pump houses on the edge of town, are being replaced by  high-capacity terminals in concrete or steel located far from population centres. They're not building the old frame models anymore; since the 1950s when small branch lines were closed and delivery points were centralized, larger storage facilities are the thing. 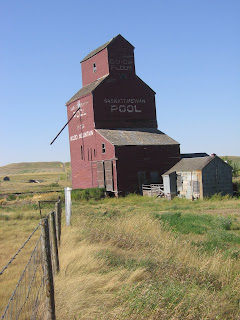 So the old-style grain elevator is vanishing from the flat horizon. Their kind warrants heritage preservation. Inglis, Manitoba has established a National Historic Site with five grain elevators, commemorating "the development of Canada's grain industry from 1900 to 1930." Scroll down their page for some great photos. 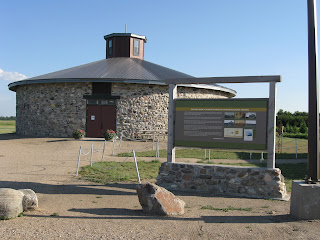 Now, all that being said, this post is not really about grain elevators, although wheat remains a theme. My recent trip back to the Qu'Appelle Valley photos caused me to wonder anew at the Bell Barn, which sits just north of Indian Head, Saskatchewan.

This is  a story almost Biblical in its proportions.

1882. The Qu'Appelle Valley Farming Company. A 53,000 acre corporate farming enterprise, an experiment supported by John A. Macdonald's government. Manager and major shareholder,  Major William R. Bell, of Brockville, who saw action in the Fenian Raids and the Northwest Rebellion. 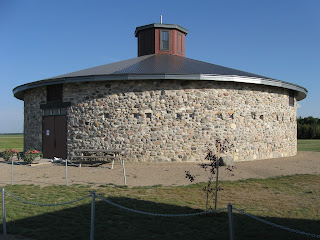 This round field-stone barn was built in 1882 to house the farms' many horses. It was derelict and dismantled in 2008, but rebuilt using the original stones by the Bell Barn Society of Indian Head, formed for just that purpose in 2006.

The barn's vital statistics are worth noting: the wooden lookout tower sat 33 feet above the prairie; from there the major could supervise work in the hundred or so buildings with in a 5 mile radius. Some sources point to similarities with Martello towers (with which a military man of the day would be familiar) and suggest that the stone barn was built as protection from a possible Indian attack. Verbal reports mention a tunnel between the main house and the barn. 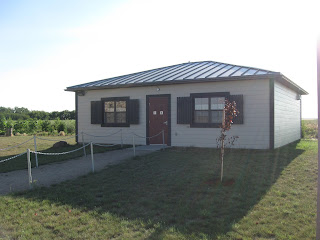 Workers were housed in 27 cottages similar in design to the guest services building replica here.


The photos which follow are taken from the interpretive panel at the entrance. We visited after hours, in the long shadows of an early summer evening. 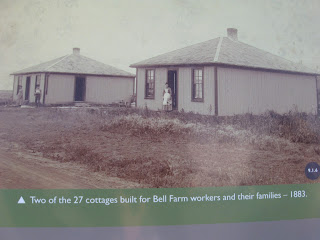 Some of the cottages were linked by the province's first rural telephone company in 1884. Pretty progressive. 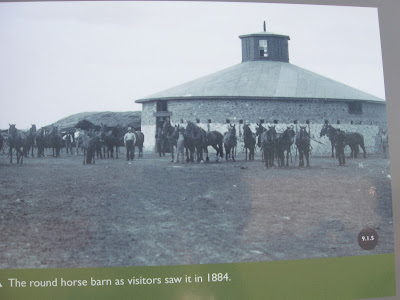 The horse barn housed 33 horses; the round design enabled one man to look after them all. Do the math: I don't know where the rest of them lived, either. You can see from these photos that the farm depended on horse-power in a big way.


To give a sense of the operation's scale - one year the tenants used 25 binders (each drawn by three horses) to harvest a single wheat field of 7000 acres of wheat. 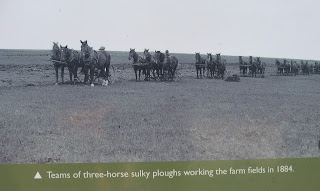 Land was subdivided for the town of Indian Head. The Dominion Experimental Farm, which we have visited, was once part of the farm. 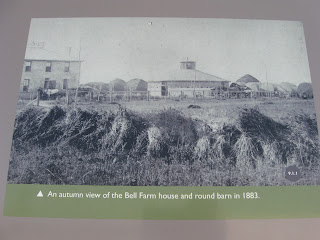 The prairie seems endless even today; imagine how it would have appeared in 1883?

There's a good website which keeps track of new discoveries about the farm and its story. Think I'll check back occasionally.
Posted by Ancestral Roofs at 5:10 PM