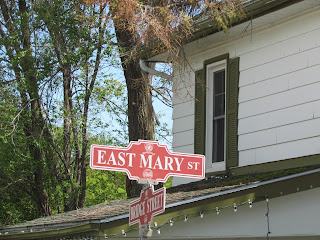 A reflection on the class system as it existed in the 1800s when Ontario towns and villages were developing popped into my head as I took photos in Picton yesterday. Of course, we know the class system no longer exists, but it's a useful way to talk about c19 Ontario towns. The vision of the nation builders was of a society structured like England's, with a privileged class of colonial bureaucrats and retired military officers holding most of the land and power (the Family Compact as they came to be known,) society cascading down in a tidy feudal manner through the orders to merchants and labourers, obladi oblada. 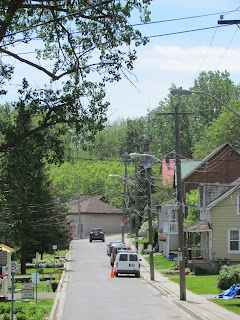 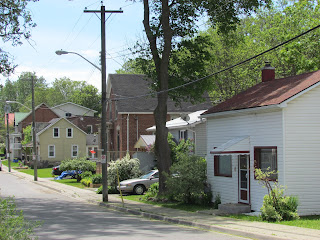 It hasn't escaped my attention over the years, in many posts, that the finer homes of these same towns and cities were usually established on heights of land, above the waterways which were essential to industries, for power, for waste disposal, for shipping. On a town's lower slopes were found the homes of working folk, in close proximity to these manufactories. A wander along East Mary Street yesterday got me thinking about this idea.

Picton's East Main Street and the streets running back from it, and parallel to it, boast the town's finer homes. They get lots of attention. Many are evolving into inns and guest homes, and establish the much-celebrated character of the town. 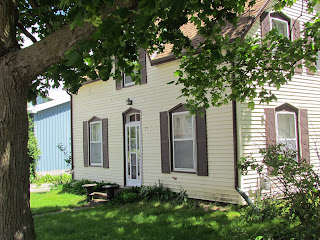 As I ventured along East Mary Street (a street I have driven countless times in my life) I became aware for the first time, in that way that only walking a neighbourhood can reveal, that this street with its workmanlike homes, a few extant businesses and the echoes of many others, is a considerable distance downhill from the town's business and well-to-do residential centre, on a slope that leads even further down to the creek flowing through a marsh into the harbour.


The scale of the houses on the eastern stretch of Mary Street is modest in most cases, and I love the old-timey feel of the streetscape (but for the proliferation of beige and brown vinyl siding, attesting to a persuasive salesman of the product a few decades ago?) From here we look up to the backs of structures central to the town's identity - the back of the Armoury, the rear of the iconic Regent theatre. We are lower town, here.

This year, the back yards of the south side houses facing the marsh (now a lovely park, which dad took great delight in showing me one time, on a rare visit from the west) are looking at fenced in floods.

I am fond of terrain that features changes in elevation, trees, slopes, turns and hidden places, so I especially love this bit of the town. Underhill. 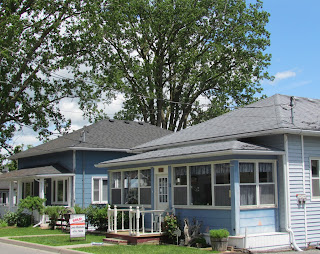 Peter Stokes and Tom Cruickshank describe the  neighbourhood this way:

"One of the earliest [streets] surveyed was Mary Street, running parallel to Main beside the marsh...In its undulating hills and sharp bends, Mary Street shows the influence of the natural topography of the land. The eastern leg, at Bridge Street, sometimes referred to as 'short Mary' is particularly picturesque; houses on the north side are built into the side of a steep bank, looming over the narrow roadway and their neighbours to the south." 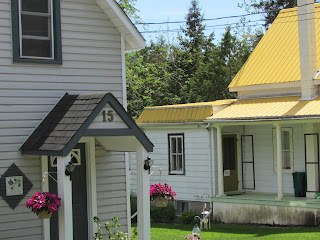 This was written in 1984. There have been changes for better, and for worse.

One thing I know for sure. Mary Street is appreciated; several regular readers drop by the blog occasionally.

If you'd like to join our walk, here's a Streetview link.


The bottom of the ravine has stories to tell. I imagine lumberyards and such, and know there were forges and a carriage works. Further up the ravine, on 150 acres of picturesque dell which now shelters Glenwood cemetery, there was once a tannery. The c1835 Mullett's Tannery tanned goat and sheep skin using sumac. For a perspecitve on the operation of a c19 tannery, here is a link. In today's peaceful garden cemetery it's almost impossible to imagine this scene: "The work was hard manual labour. Living next to a tannery meant the constant stench of curing leather and stagnant pools of waste material. Streams became heavily polluted as tanning liquors, lime solutions, flesh and hair were discharged into them." (Northern Woodlands website, Summer 2011.)
I walked down a path from the street to the park along the creek, willing myself to time travel to the earlier days of this place. I ended up chatting with a passerby also enjoying the spring sun. She recalls sitting in Mary Street School (photo here) as a girl, as the smoke from the dump which occupied the ravine at that time, curled up and through the classroom windows. Men and boys kept the inevitable rat population discouraged, with nightly .22 rifle operations. Hmmm. Dangers of time travel.
Posted by Ancestral Roofs at 5:47 PM