Forgive me. Can't help it, I am still wandering canal-side. Today's sharp cold wind makes the prospect of a virtual amble in this bucolic bit of Ontario all the more appealing. In July I spent an afternoon at Beveridge Locks near Perth, a stop off the road back to camp.

We're not on the Rideau anymore, Dorothy, but along a boondoggle called the Tay Canal. I'll try to distill the story from the wealth of Perth and District heritage sources. It's the story of Perth entrepreneurs who created a water link between their town (and their industries) on the Tay River and the Rideau Canal and the wider world of outside markets in the 1800s.

A first canal (I'll omit description of the gargantuan physical labours of the builders, and the  financial and political machinations of the Tay Navigation Company) connected Perth with Port Elmsley, the gateway to the Rideau.) A later 10km iteration joined Perth and Beveridge Bay by the 1880s. Not without controversy. Now it's the serene recreational boat passage I show you here, part of the UNESCO World Heritage Site Rideau canal system. 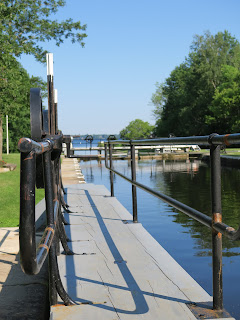 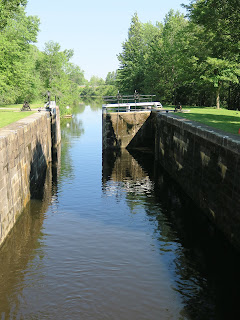 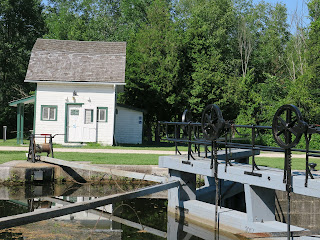 Ample information about Beveridge Lockstation (this one is the lower of the two, it turns out) and all the other wonderful spots I've been collecting, is ready to hand on the Rideau Canal World Heritage Site site. If you think you might like to venture canalside, this appears to be a handy guide. But nowhere can I find any history of the buildings of Beveridges. Love the tiny gambrel roof shed, and would like to know its story. 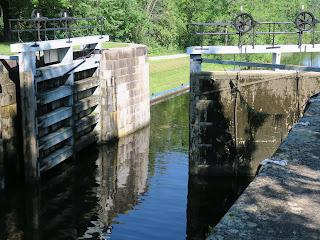 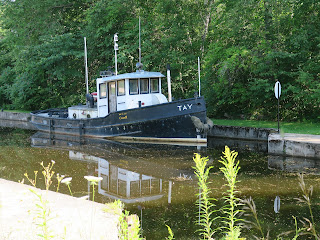 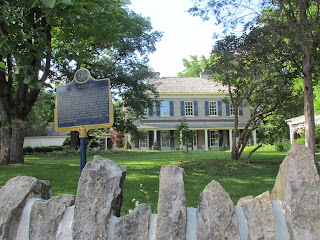 A fascinating part of the story is the role of 'The Haggarts.' An OHT plaque on a quiet waterside street in Perth conjures the industrial power of the town, and the family, in the nineteenth century.

John Haggart, Scottish stonemason, came to Perth in 1832,  purchased and expanded the settlement's first (1817) mill and mill dam, and built this exquisite Regency stucco over stone house on the property in 1837. 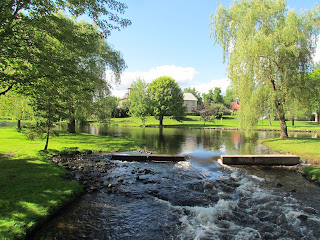 Here's what HistoricPlaces.ca has to say about the home, still in the perfect Regency setting of trees, sloping lawns and a wild ravine, a view of the lagoon behind a rustic stone fence. 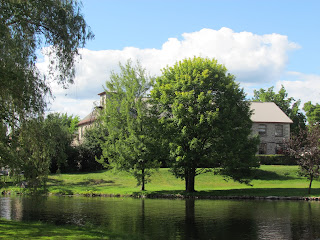 Did we mention... a man who got things done? One of the things John got done was that canal leading to his mill complex, and the turning lagoon at Tay Basin.

There was comment. The canal proved awkward, acquiring the name 'Haggart's Ditch.' Finally, the government of the day intervened. Sir John A. commented that the project draining the county also "drains the public treasury pretty well."

And as it served Haggart and his enterprises, it serves us well too. A green and lovely spot in which to contemplate Perth's industrial past. And the empire builders who brought it into being.