As I hopped out of my car on busy Sydenham Road on a July afternoon, I remembered why I had  avoided this bit of historic walkabout for so long. The traffic was hurtling by, ready to join the artery that is Princess Street, already in city mode. The allure of a quiet early village (for surely the resonance was there for me) was eluding them. Certainly the ever-widening arteries, the crazy-busy intersection (one definitely has to venture out on foot to appreciate this old place) and the Tim Horton's (which in fairness was nice enough to have a patio with umbrellas) made it easier to miss the nineteenth century vibe.


In fact, the village's worthy Beamish House across Princess street is completely inaccessible, shrouded as it is in trees (of course I would do the same were I six feet away from six lanes of traffic.) 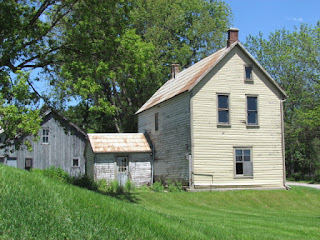 It should be such a quiet place. Two churches, two churchyards, an expansive rural garden cemetery with ancient trees and matching memorials. The feel of the long-ago village is apparent, once you're on foot, the white noise of traffic put aside. There's a mix of early houses higgledy piggledy up the hill, stone, frame, brick. 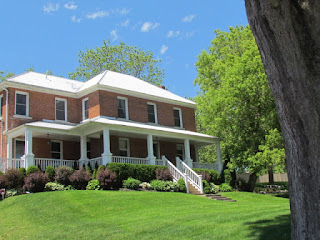 My personal favourite is this yellow frame house, with its rusting metal roof and brick end chimneys. The tall house with narrow footprint makes me think it's quite old indeed. It's being ignored, hopefully not until it starts to ring "eyesore" alarm bells and gets demolished.

It's clearly not the favourite of the tanned and well-dressed realtor with whom I chatted, after requesting permission to creep up his driveway for the photo above. The usual "owner not taking care of it, getting run down, want it gone" story. A realtor without a sense of place. Sigh. Glad I stopped when I did. The real estate office occupies the highest point of land in the village (clearly looking down your hill at the hoi poloi started much earlier) but its inhabitant had no house history to recount. Maybe a large farm home, nothing more. 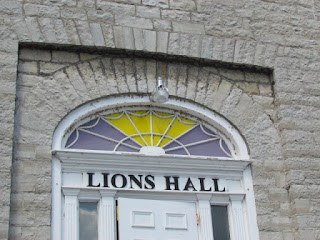 Perhaps he's not aware how many gladly pass up sanitized suburban uniformity for the eccentricities of small old places, with stories?

And stories, Cataraqui has to tell. What makes this place feel like a village has to do with the survival of the 1847 town hall, and several still active early churches.


The town hall has been repurposed as the Lions Hall. Its exquisite neoclassical doorway with elliptical fan transom, entablature with substantial cornice, pairs of fluted pilasters on either side of the sidelights is an eye-catcher, even if the Lions' team colours detract just a tad from the fanlight. About as much as the spiders vs. night-flying insect battlefield beneath the porch bulb.

Just as so much history is told in the acres of cemetery across the road, much is related in the graveyard of the red brick former Methodist Church, which replaced an early frame church built by the United Empire Loyalist faithful who had arrived in the area in 1784. A plaque in the churchyard brings long-ago stories alive. The grave of Michael Grass is here, as are stones commemorating the UEL refugees he led to this place, where they began again: "Day, Graham, Grass, Herchmer, Hill, McGuin, Powley, Purdy, Snook, Wartman and others."


In a post earlier this year, I walked the street of Purdy's Mills, across and down the hill from today's Sydenham Road. There you'll visit the plaques and gravemarkers of these earliest settlers in Cataraqui. I wonder how many of the houses still standing in the village, were built by their descendants? 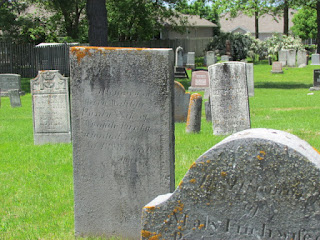 Just as plaques tell stories, so do the simple utilitarian vernacular structures of the village. Let's listen to a few. 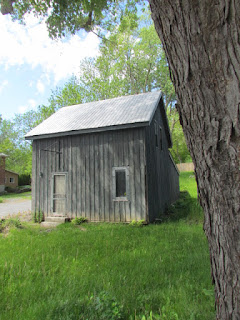 Posted by Ancestral Roofs at 3:40 PM